Saturday marked the ninth-straight regulation loss for the Devils and their 13th loss in their last 15 games decided in 60. It’s sunk the Devils to 30th in the National Hockey League and are only safeguarded from last in the league by the lowly (yet as of late, pesky) Buffalo Sabres, who are just one point worse in one more game than New Jersey.

Which means, the Devils and Sabres figure to be rather interested parties in the league’s draft lottery. This year’s prize is Canadian-born, Michigan Wolverine defender, Owen Power. In 26 games at U.Michigan, he scored three goals and 13 assists. Power was not released to play for team Canada at the World Junior Championships in the winter, forcing his head coach, Mel Pearson into a bit of a whirlwind of commentary–especially as teammates, Brendan Brisson and Cam York and fellow freshman, Matty Beniers were released to play for team USA. Beniers, a 6-foot-1 center who scored 24 points in as many games and Kent Johnson, who led Michigan with 18 assists and 27 points and was also absent from Canada’s WJC squad, are no-brainers to be announced in the Draft’s top-10…probably five. But Power will be the prize for the lotto victor. As easy as Alex Lafreniere, as easy as Rasmus Dahlin in 2018, as easy as Auston Matthews in 2016…McDavid in 2015. He is the guy.

If you look back on blueliners that go top of their class, it hasn’t translated to instant success. Roman Hamrlik, ’92 to Tampa in expansion season–54 losses; Ed Jovanovski, ’94 to Florida didn’t qualify, meanwhile, Bryan Berard, ’95 to Ottawa never played for the club, requested a trade and made his NHL debut with the Islanders in ’96–winning the Calder as the league’s top rookie. Chris Phillips didn’t win a Calder, but did buck the trend after his ’96 draft–Ottawa made its first postseason and 12 more including a Final appearance with No. 4 a lifelong Sen.

More recently: Erik Johnson (2006) played one season of college hockey before joining the Blues and missing his sophomore pro season due to an off-ice, golf cart-related knee injury–he was traded by the team just after his 200th career game. Panthers went D in 2014 and Aaron Ekblad was the league’s best rookie winning the Calder–but no postseason for the ‘Cats and no postseason this year for Ekblad due to injury–was likely a coming-out party for the dynamic defender…and most recently, the Sabres ‘Fallin for Dahlin in 2018. You know the story, the Sabres haven’t stopped falling, though the regression (and -34) in the 21-year-old doesn’t appear to be majorly concerning given the horrid campaign in a bizarre season.

So, the recipe for instantaneous success doesn’t match the historic analysis. But that might not even be of concern for the Sabres or Devils. Because if you’re betting on the draft, you probably want to take the field. Last year’s Red Wings fell from top odds to fourth; Colorado via Ottawa in 2019 fell from the Jack vs Kaapo debate, to a no-brainer in Bowen Byram at fourth. In 2017, the Avs, bad on their own, watched the Devils, Flyers and Stars fly up in the lottery–which had to have been part of the discussion for the recent changes to its format. Of course, Cale Makar looks like one hell of a consolation prize, no?

This year though all 16 clubs that miss the postseason will still have a shot at one of the top two picks with the 31st-finisher having not falling beyond third. It’s also worth noting the tight battle for the final playoff spot in the West division with the Coyotes, Blues, Sharks and Kings all in reach. Arizona, regardless of finish, won’t be eligible for the lottery due to the loss of their first round pick due to draft combine violations.

So if you’re part of Team Chaos, I suppose you’ll fancy a ‘Yotes miss and a ‘Yotes lottery card for first or second dimmed in gray–there are no protections for a pick loss out of league sanction. Arizona, who missed out on McDavid and Eichel in 2015–selecting and eventually trading Dylan Strome–won’t be making an early appearance at this summer’s virtual event.

Might Buffalo or New Jersey still be bad by 2022-23? Is there added patience if you continue to see the living highlight reel that is Regina Pats’ center, Connor Bedard? At 15 he’s tied for sixth in WHL scoring and the guys in front of him include two 19+ year-old NHL first rounders, two others drafted to the NHL and one, Owen Pederson, who just might get picked in his second year of eligibility–he’s 6-foot-3 and unlike many prospects this season, he’s managed to give the scouts 22 games worth of tape. But, safe to say eyes are already on the 2023 eligible Bedard. 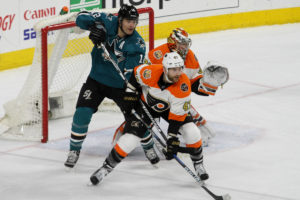 Everything the Sharks and Golden Knights did to honor Patrick Marleau’s record-breaking feat on Monday was done to perfection. Kudos to Marleau, who besides owning the league record for regular season games played–1,770–also boasts near-200 postseason games. Among them, there’s one Cup run and back-to-back Western Conference Final appearances (2010 & 2011).

So, I ask this: Even if the Sharks need to build this back up a bit, do you not entertain dealing your first round pick for instant talent? Can you kick tires on Patrik Laine or be the other party in however Calgary’s core shakeup works out? Could San Jose bring a heart-and-soul guy like Zach Hyman in via free agency? Jaden Schwartz or David Krejci for offensive punch and cup resumes? Add a starting netminder in say Frederik Andersen or Antti Raanta?

Need I remind you that the Sharks once came on top to get Joe Thornton? Ditto Dany Heatley, Brent Burns and Erik Karlsson? Of course, none of those were directly tied to trying to put a bow on Marleau’s sure-fire HHOF, now legendary career. But, perhaps now you recognize what’s special, what No. 12 deserves, what fans in the Bay Area have been craving and where opportunity is to make this happen. Marleau, who seems intent on playing again and isn’t playing for AAV is the easy part of this equation, but can GM Doug Wilson finally try and get Mr. San Jose Shark a Cup to end his superb career?

END_OF_DOCUMENT_TOKEN_TO_BE_REPLACED

The Philadelphia Flyers defeated the visiting Colorado Avalanche by a score of 5-3 during regulation. In addition to the loss, the Avalanche lost Nathan MacKinnon to an injury sustained in the first period.