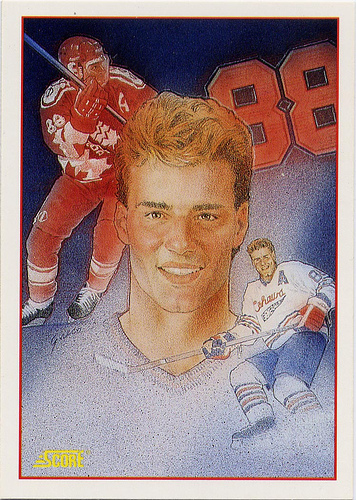 Lindros Finally Inducted into the HHOF

Monday’s announcement of the 2016 inductees into the Hockey Hall of Fame saw four get the call. Among those getting the call was Eric Lindros. The much-debated subject of the Hall of Fame since he was first passed over six years prior.

In a career marred by injury, Lindros played in just 760 NHL games in a 13-year career. Still, he managed to score 865 points and capture a Hart Trophy in 1994-95 as the league’s most valuable player.

Following the season in which he earned MVP honors, he scored career-highs in goals (47), assists (68) and points (115) in 1995-96. It was a reminder that all of the drama that started his career on the wrong foot with many, was not without reward.

After being famously drafted by the Nordiques in 1991, refusing to play for them and being held back in juniors for the 1991-92 season, his rights were finally traded in 1992 to the Flyers. He broke into the league scoring 41 goals, 34 assists and 75 points as a rookie.

During his time with the Flyers, he had a storied feud with general manager Bob Clarke. After a contract dispute kept him out of action for the entirety of the 2000-01 season, he was traded to the New York Rangers. While there, he stayed healthy for his first two seasons and was a productive player. After the lockout, Lindros signed with his hometown Maple Leafs as an unrestricted free agent in 2005. Some home cooking didn’t stop injuries from piling up, limited to 33 games. He’d play 49 games the following season in Dallas before retiring at the age of 34.

His induction to the Hall is long overdue with lots of speculation that he could have been inducted sooner had he not have had as many damaged relationships with multiple NHL personnel, some of whom sit on the selection committee.

The late Pat Quinn was also inducted into the Hall in the builder’s category. Quinn, who passed away in 2014 at the age of 71, began his post-playing career as an assistant coach under Fred Shero in 1977. Following Shero’s exit from the organization in 1978 and the mid-season replacement of Bob McCammon, Quinn assumed head coaching duties. He’d guide the Flyers to a 141-73-48 record in parts of four seasons before being replaced by McCammon mid-season in 1982.

International star and two-time Olympic gold medal winner, Sergei Makarov was inducted after a career that spanned 20 seasons, the first 13 in Russia followed by 7 seasons in the NHL with Calgary, San Jose and Dallas.

Goaltender Rogie Vachon, who waited 31 years for the call, was also inducted on Monday. His career included 16 seasons in net with the Canadiens, Kings, Red Wings and Bruins. He won three Stanley Cups with the Canadiens in 1968, 1969 and 1971. He won the Vezina Trophy as top NHL goaltender in 1968.