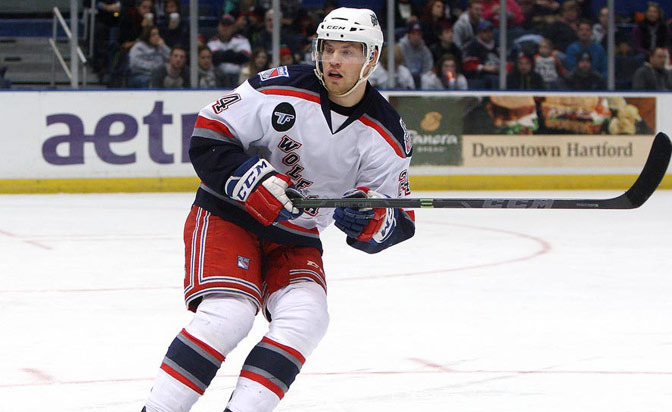 Hartford, CT: Back again at Hartford’s XL Center Saturday night for the final meeting between the Hartford Wolf Pack (38-23-5-4), and fellow Connecticut rival, the Manchester Monarchs (45-16-6-3). The Wolf Pack are coming into tonight’s game strong after a big win over the Syracuse Crunch last night. If you didn’t catch last night’s game then you definitely missed out, after being down by two goals and having a tug-of-war on the scoreboard the Wolf Pack clawed their way to a 6-4 victory in the third period. A real miracle on ice for the team who’d faced much adversity against the Crunch. The Monarchs, too, are coming into the game on a win after winning their third straight game against Portland last night. With both teams on a high pedestal after last night, the stakes are pretty high and with playoffs just weeks away, every win counts.

A relatively slow start for the first period; the Wolf Pack seemed a bit sluggish and had a hard time getting the puck to stay in the Monarch zone. Yann Danis who started in goal tonight for the Wolf Pack was doing a rather excellent job; after being left hanging in the back by his teammates Danis came up big with an awesome save, but, of course, this is no surprise coming from the NHL veteran. A call on Justin Viave (HFD) for slashing at 5:40 ultimately lead to a Monarch goal at 6:38, although initially being blocked with Danis, Nic Dowd (MCH) picked up the rebound and banged it in. Despite a big turnover by the Monarchs in front of their net toward the end of the period, goalie Patrik Bartosak made the save. The first period closed with a 1-0 advantage for the Monarchs.

Dirty playing to start off the second period, with Monarch’s Scott Sabourin going knee to knee with Wolf Pack’s Justin Viave, causing Viave to get hurt at 2:01. The game misconduct gave the Pack a power play, with a nice scoring opportunity for Oscar Lindberg (HFD), but again, Bartosak saved the shot. The tables quickly turned, with the Monarch’s taking control of the puck and keeping it close to the Pack’s zone. A second goal came in for the Monarch’s by Michael Mersch at 17:05 off a power play. The period ended with Manchester still leading the Wolf Pack 2-0.

Entering the period down by two, the Wolf Pack seriously needed to kick it into high gear. After last night’s third period comeback, could the Wolf Pack do it again? Slipping up a little bit, Manchester was called on a few penalties. One called on right-winger, Sean Backman lead to a 5-on-3 power play at 14:18, Wolf Pack’s Oscar Lindberg came up big with a goal to finally get the Pack on the board at 14:55. Still down by one with the period ending, Hartford does it again. With just about 0:40 left, Lindberg scores again to tie the score and push the teams into overtime.

This isn’t the first time that the Wolf Pack and the Monarch’s have found themselves in overtime against one another. Earlier this season, mid-November, the two fought each other in overtime with the end result being the Wolf Pack suffering a 4-3 loss. This time around, overtime was entertaining but scoreless. Chris Mueller, however, came quite close in the last 20 seconds with a breakaway but could not bury it behind Bartosak. The Wolf Pack headed into their 6th shootout of the season. Both Danis and Bartosak put up a big fight during the shootout, Danny Kristo (HFD) scored on the first shot in the first round. Kristo’s shot would be the only goal scored during the shootout. The Wolf Pack made their second, third period comeback, with the final score being 3-2, Hartford.

“We really came back at them with the power play in the third period, it was a big effort from the guys,” said Pat Boller, the Wolf Pack’s Assistant Coach and Assistant General Manager. “[Our message] is just to keep pushing the pace,” he continued to say, “Put bodies to the net, and work hard.” Boller also commented on the vitality of both Lindberg and Danis to the Wolf Pack, praising them for their play tonight and their perseverance during tonight’s game.

The Wolf Pack will be back at the XL Center Friday April 10th to play the Springfield Falcons.