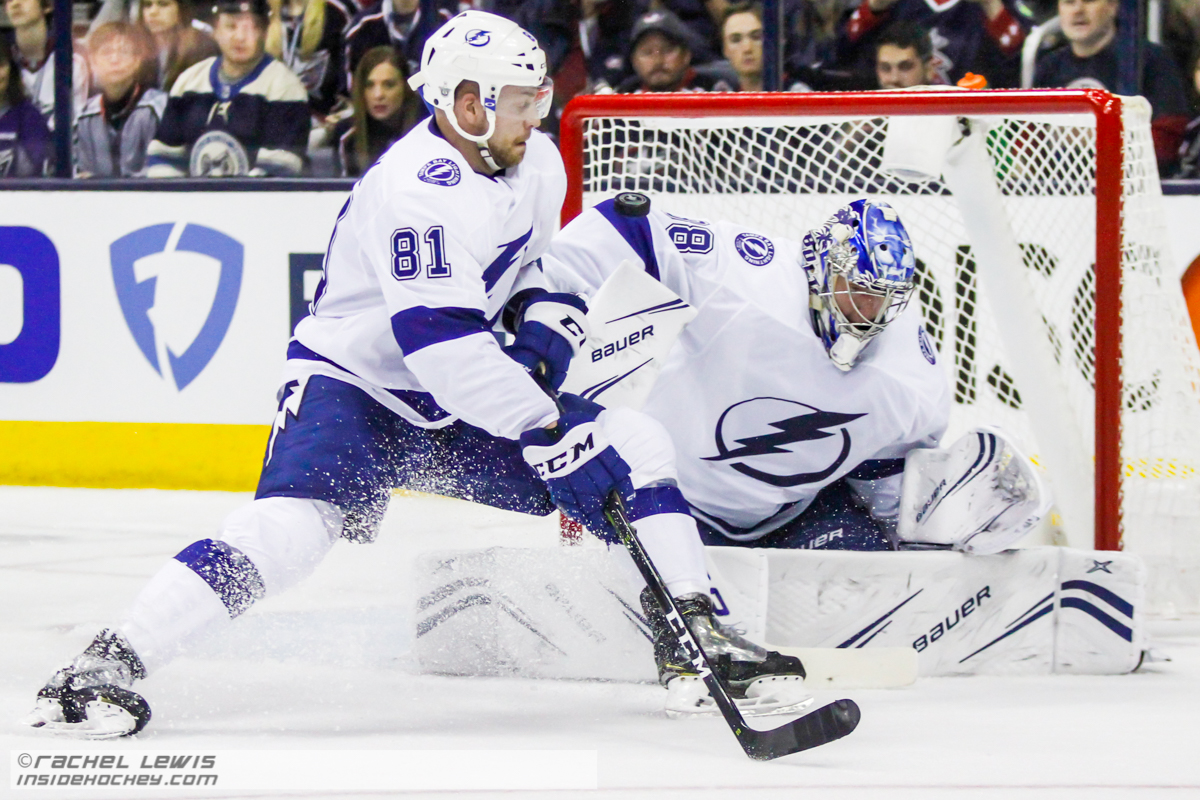 TAMPA – The Tampa Bay Lightning opened Saturday’s 2-1 victory over the Detroit Red Wings by looking to start another string of wins. The Bolts ended a season-high three-game losing streak on Thursday with a 3-2 win over the Blue Jackets as it also ended a rough stretch for goalie Andrei Vasilevskiy.

The Lightning net-minder had a pair of 4-3 losses to the Carolina Hurricanes and Dallas Stars last week before giving way to Curtis McElhinney on Tuesday in a 3-1 loss to Columbus.

Vasilevskiy won his second in a row on Saturday in turning away 25 shots in stopping the Detroit Red Wings for his NHL-leading 23rd win of the season. He also posts a league-leading 1.99 goals against average.

He is also 12-0-0 lifetime vs. the Red Wings as he boasts a .938 save percentage with 1.77 goals against average when facing Detroit.

The third period was not without its dramatic moments as the Lightning gave up 12 of the Red Wings’ 26 shots in the third as Vasilevskiy faced numerous bids for a tie late in the game.

“We gave up too many chances in the third,” said Lightning coach John Cooper. “Some were unlucky breaks, but for the most part, we were just a little too loose. I think part of it was we were pressing for a third and it was opening us up a little bit.”

Detroit came in at 2-1-1 over the last four and the Red Wings defended the Lightning well over most of the afternoon. They gave up two first period goals and then limited scoring chances over the rest of the outing.

“They’re defending really well and when they are defending instead of getting four or five you’re getting two and then you have to defend harder yourself,” said Cooper.

Ross Colton and Brayden Point gave Tampa Bay a quick, early lead with scoring markers in the first 7:26 to give the Lightning what would turn out to be an insurmountable 2-0 lead.

Colton wasted little time getting the Lightning on the board as he collected a loose puck in front of Detroit goalie Thomas Greiss at 4:07 for the 1-0 lead. Andreas Borgman fired a shot that was deflected off of Pat Maroon which set up Colton on the right side of the crease.

Point pulled into a tie for the team lead in goals with Steven Stamkos with his 16th of a season as the Lightning flew to the goal off of a Red Wings turnover in the Lightning zone. The puck went into the neutral zone where it was collected by Ondrej Palat who fed it to Victor Hedman and he found Point on the right side of the net for the 2-0 Tampa Bay lead at 7:26.

Hedman, who leads NHL defensemen in power play points with 20, tallied his 29th assist this season while Palat figured in the score with his 21st.

Detroit’s Adam Erne gave the Red Wings their first goal of the game when he was able to reach his stick around the left side of Vasilevskiy at 4:00 in the third. He controlled an errant puck off the blade of Darren Helm as it was out of reach of Vasilevskiy to be able to reel in.

The two teams matchup again Sunday at Noon EST before finishing the season series on May 1st and May 2 in Detroit.