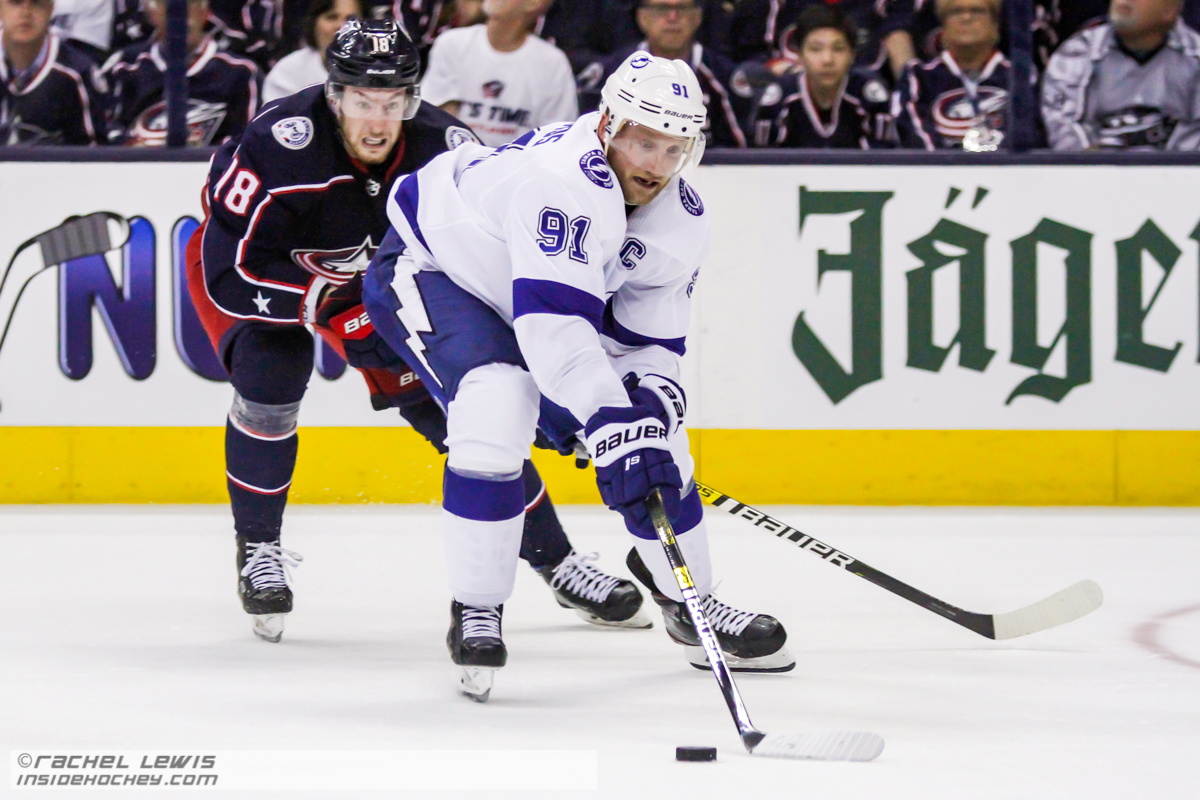 Stamkos, Killorn pace Lightning to 8-0 rout of Islanders in Game 5

TAMPA -The Tampa Bay Lightning needed to return to several things in order to take the upper hand in the series against the Islanders and they accentuated all of those objectives and more on Monday Night as they dominated the New York Islanders, 8-0, to take a 3-2 lead in the NHL semifinals in Amalie Arena.

First, the Lightning needed to rediscover their offense and get back to playing the free-flowing style of hockey that has been a part of the mantra of this franchise under Coach Jon Cooper.

Second, some combination of superstars Steven Stamkos or Nikita Kucherov needed to show up to the series and accentuate themselves or himself on the offensive end in undeniable form.

Third, rediscovering what was an unstoppable power play had to happen.

Tampa Bay had all of that and more as Stamkos and Alex Killorn had two goals and an assist each in an explosion of offense after nip-and-tuck hockey highlighted the first four games of the series. Nikita Kucherov was once again developing plays in collecting three assists and center Brayden Point had his 13th goal of the playoffs on the power play at 1:59 in the third period.

The power play yielded three goals which was one more than in the first four games, combined. Once, the Bolts were able to accentuate their style, the Islanders lost their discipline and put Tampa Bay on the power play nine times.

Goalie Andrei Vasilevskiy pitched a shut out as he saw only 20 pucks and he went to 12-0 in his playoff career after a loss.

The Lightning attack was it’s free-flowing and crisp self once again with three first period goals, led by Stamkos’ game-opening score, some 45 seconds into the contest. The Lightning outshot New York, 19-5, in that first period as they rocked the Islanders to the tune of 40-21 for the game.

“Internally, we discussed and going into the third period of last game,” said Stamkos. “I think that’s where the mentality started. We didn’t know if we were going to come back. We almost did in Game 4.  We gained some confidence. You have to create your own momentum sometimes.”

Cooper said the Lightning called on their pride between the second and third period in Game 4 and the adjustment and the care were at the forefront in that third period as well as in the immediate response in tonight’s game.

“The second period the other night – we’re a proud group – and it wasn’t in our DNA for that to happen. I think our response in Game 4, although we fell short, carried over to tonight and the boys just built off of that momentum. We wanted to end the series tonight. We didn’t want to build on it. Love the effort, but in the end, it was one win and regardless of what you win by, it’s the one win that matters, not by how much.” – Lightning coach John Cooper, summarizing the way that Game 5 was set up

Stamkos set the tone out of the locker room as he gathered the puck off of a blocked shot off Alex Killorn’s blade and deposited it in the net for a 1-0 lead. Stamkos had an open net after New York goalie Semyon Varlamov came up to the top of the crease to defend Killorn shot before the block.

“Stammer has played well,” noted Lightning coach John Cooper. “People just give the blanket that if Stammer is not scoring, he’s not contributing. It’s just not the case.  It’s hard to score in this league, especially against that team.”

Yanni Gourde extended the lead at 11:05 as he bounced a puck off of the outstretched stick of Andy Greene and it ricocheted through the five-hole on Varlamov for a 2-0 Tampa Bay lead.  Gourde was trying to pass the puck over to Barclay Goodrow after he recovered the puck deep in the New York zone and was skating toward Varlamov.

Gourde said that the speed with which the Lightning played was created with the immediacy of moving the puck up the ice.

The final goal of that raucous first period came when Alex Killorn followed a Denis Savard shot with a score off of a rebound that Varlamov could not control at 15:27. The Islanders’ goalie had not seen shots or speed coming at him this fast at any point so far in this series.

The tenacity of the Lightning forced Islanders coach Barry Trotz to remove Varlamov after the first and insert Ilya Sorokin, but the Lightning were no more courteous toward Sorokin, who hadn’t been seen since Game 5 of the series with the Boston Bruins.

Tampa Bay added three goals in the second and two in the third off of Sorokin as Killorn and Point netted power play goals.

“We stuck to our plan,” discussed Cooper. “We did play the game faster. We tried to expose some things that they exposed on us so it’s a little bit of a ping pong match. I am sure they are going to make some adjustments as well.”

Stamkos collected his second goal of the night on the power play at 5:42 in the second period when he teed up a one-timer from the middle of the left circle for a 4-0 Tampa Bay lead.  Killorn followed Stamkos by deflecting a Victor Hedman one-timer at 17:53 in the second for the 6-0 lead.

“We have seen that shot on our team a whole bunch,” said Point on Stamkos’ power play marker. “He has got one of the best releases in the league. He puts pucks in the mail slot sometimes. That was a big shot for us and a big time in the game for him to get his second.”

Luke Schenn had his first goal of the playoffs at 12:05 in the third as Shenn not only found the back of the net, but was involved in a fight and some other altercations.

“I think, tonight, we came out with a lot of jump,” Point noted. “Guys were winning races, they were winning puck battles and some goals were created from hard work. There were some good bounces and I think we were able to carry that through the whole game.”