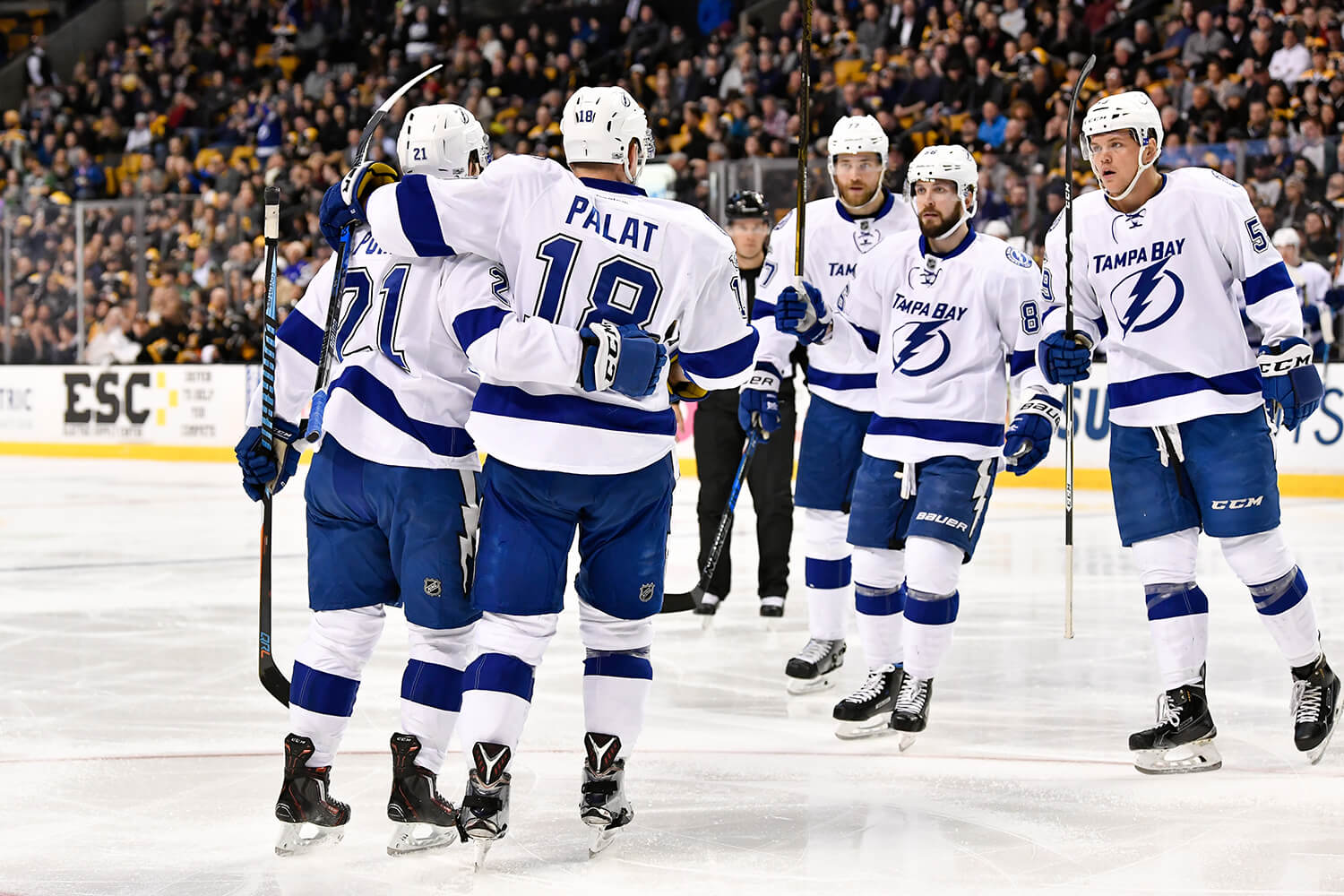 The Tampa Bay Lightning celebrate a goal during the second period during a NHL game.

For years, the Penguins-Capitals second round meeting was the spectacle of the postseason. Long, thrilling and star-powered. That matchup may again repeat itself this spring, but Wednesday offered a preview to what might be the must-see series of this year’s playoffs.

Washington twice overcame deficits to Tampa including a third period tally with less than a minute to force overtime before Victor Hedman notched the game-winner to pad the season for the 118-point Lightning, 5-4.

Lars Eller gave the Caps an early lead, scoring the only goal of the first period. But Tampa took advantage on back-to-back power play’s to start the second period from Nikita Kucherov 1:19 in and Steven Stamkos a minute later.

Bolts depth player, Anthony Cirelli proved not all bottom-six’s are created equally at 6:45 of the second–scoring his 16th of the season to make it a 3-1 contest before Washington started to answering back.  Carl Hagelin’s 10:30 and T.J. Oshie’s PPG three minutes later briefly evened the score before Kucherov burried his second of the game to help ice an open period.

The Caps, without the same luxury as their opponent, knew they needed a point to help keep pace on the Metro division title, battled in the third–outshooting the Lightning 19-10 before Evgeny Kuznetsov netted the equalizer with under a minute in regulation.

In overtime, both sides traded chances before Hedman cashed in on his 11th of the season to secure Tampa with their 57th win of the season.

A back-and-forth affair, that saw Washington put 58 shots on goal on Lightning netminder, Andrei Vasilevskiy, was everything one would hope to find in a playoff game in the next few weeks. It also showcased what might be the most-anticipated matchup this postseason.

Last year, after finally slaying their dragon in Pittsburgh in six games,  Washington entered a fierce, seven-game Conference Final that saw them overcome a 3-2 series deficit to outscore Tampa 7-0 in game’s 6 and 7, advance to the Stanley Cup Final and help win the franchise’s first championship.

But if what’s anticipated seems close, it’s clearly only from afar as the Capitals declined to read much into Wednesday having a ‘playoffs in March’ vibe to them.

“Maybe for the fans or people who like the ‘trash talk,’ Kuznetsov said. “But for us, we’re just focussing on every game. This is (a) fun game to play in.”

With one more game between the two remaining, Capitals goalie, Braden Holtby, who made 20 saves, was also quick to dismiss any of it as preping for a future opponent in the next few months.

“(Regular season) wins-losses don’t mean anything in the playoffs,” Holtby said. “It’s what you learn from and how you build and what you’re going to put on the ice come playoff time.”

Even if the Lightning clinched a playoff berth nearly three weeks ago and the Presidents’ Trophy earlier this week, they too were quick to point out the value, or lackthereof, in the regular season once you’re in the playoffs.

“It doesn’t mean a thing when playoffs start,” Stamkos said. “We’re happy we’re playing quality opponents down the stretch…That’s important for us to just see where we are and get our game on track heading into the playoffs.”

The two teams will meet again in Washinhton for the final time in the regular season on Saturday, March 30–another chance to size up their opponent, each of which appear to be standing in the other’s way for a shot at the Cup.