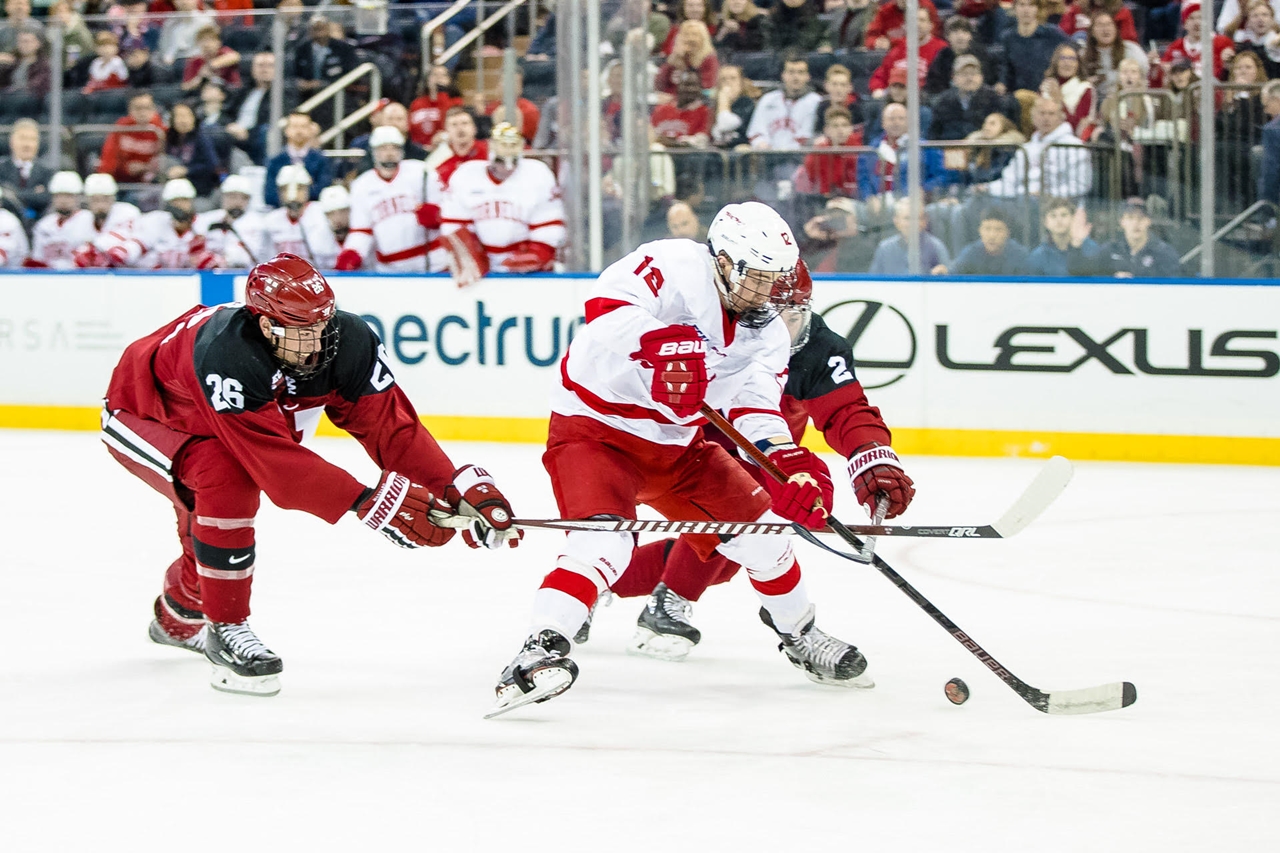 Hamden, CT — Harvard’s hockey team has ridden a roller coaster the whole season. The Crimson entered the weekend hovering around .500 in both overall record and conference play and alternating between shootout games and nail-biting defensive affairs. Quinnipiac, meanwhile, has controlled a top-10 spot in the national polls for much of the season by returning to their identity: tight checking, strong goalie play, and waging physical war. The teams met on Saturday night at the People’s United Center with valuable ECAC points up for grabs. The Crimson entered the Bobcat’s den atop York Hill and escaped the blistery cold night with those points by using QU’s normal formula.

The opening frame was as even as possible. Each team got 13 shots and got their share of chances. Each also had an early penalty and power play that the other killed off. Andrew Shortridge ensured Harvard’s power play was silenced with college hockey’s best save, stopping Jack Drury on his gut twice while stretching out. However, the only imbalance came when Ethan de Jong took a tripping penalty and sat for two minutes. Harvard’s nation-leading power play clicked when John Marino found open space above the left circle. The junior from North Easton, MA, and Edmonton Oilers draft choice lasered home his first goal of the season to stake Harvard to a lead they held into intermission. “I know he’s missed a few empty netters”, mused goalie Michael Lackey. “I kinda joked with him about it. But it was nice to see him beat the goalie straight on.”

Quinnipiac dominated the second period from puck drop to final buzzer. They won the shots 17-9 and tantalized their crowd. Michael Lackey stopped every shot and ensured Quinnipiac’s offense resembled Tantalus in the middle stanza.bLackey set a career high of 46 saves on 47 shots faced. His previous career high was 41 saves on December 1, 2017, also set against Quinnipiac.

Rand Pecknold’s squad dominated the final frame’s shots again, winning 17-5. Lackey stopped almost everything in the frame and got help from his teammates blocking shots in front of him. Late in the period, Shortridge hit the bench for an extra skater and it backfired. Jack Drury got his revenge with the empty netter after being robbed earlier in the game. QU kept attacking and broke Lackey’s shutout bid when Ethan de Jong punched home a Wyatt Bongiovanni wraparound feed. Even then, Harvard killed the final seconds and escaped Hamden with a 2-1 victory and two ECAC points.

“I guess we didn’t score until our 47th shot, but he (Lackey) was good.” Bobcat Head Coach Rand Pecknold mused. “He was the best player on the ice and that’s the game of hockey, where goalies steal games. It wasn’t our best effort. It’s a disappointing loss, but give them a lot of credit.”

Quinnipiac drops to 16-5-1 overall and 7-4-1 in the ECAC. They remain two points ahead of second-placed Yale with the Bulldogs inactive tonight. The Bobcats travel to Boston University next weekend to face the Terriers. Puck drop is at 7 pm on Saturday night at Agganis Arena. They then return home to face the Holy Cross Crusaders on Tuesday, January 22nd. Puck drops at the People’s United Center at 7 pm.

Harvard splits the weekend after losing to Princeton the night before. “It is amazing when your goaltender comes out with some huge saves how much that impacts your ability to win or lose” remarked Crimson Head Coach Ted Donato.

The Crimson improve their record to 7-5-3 overall and 4-4-2 in ECAC play. They jump from 9th to 5th in the ECAC standings with the points. The road swing continues with a visit to ancient rival Cornell on Friday night and a visit to Colgate on Saturday. Puck drops at Lynah Rink and at Class of 1965 Arena at 7 pm both nights. Harvard returns home on January 25th and 26th to host Clarkson and St. Lawrence.