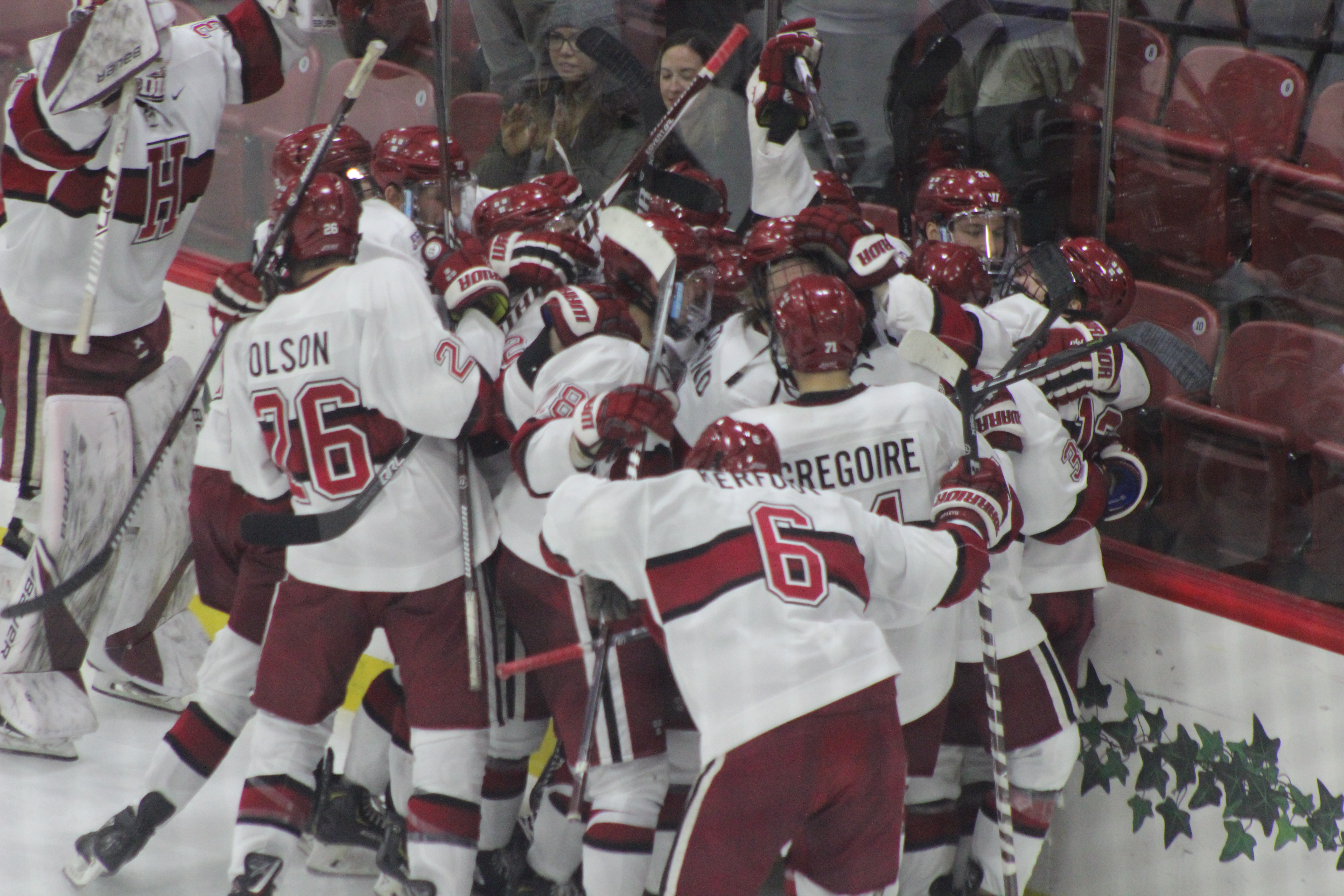 Krusko and the Crimson Outlast Big Green in Overtime

Allston, Ma. —  The Dartmouth Big Green are not strangers to elimination games. They were in a win or go home situation last week at home against St. Lawrence. They soundly whooped the Saints 8-0. Tonight, in Harvard’s building, they brought the same kind of fire to game two of this quarterfinal series.

Brendan Demler had the first shot of the game and he made it count. A shot from the blue-line made its way past Crimson goalie Cam Gornet at 1:03 for the quick 1-0 Dartmouth lead. Just over a minute and a half later Drew O’Connor would pop home a Quin Foreman pass at the bottom of the left circle for the early 2-0 Big Green lead. The goal was O’Connor’s seventh in his last six games.

Dartmouth had the game’s first power play at 4:44 when Jack Rathbone was called for Tripping. The Cig Green had one decent chance otherwise the Crimson easily killed it off. O’Connor would be called for Interference at 11:11. Jack Drury tipped an Adam Fox wrist shot over Adrian Clark’s shoulder for the Power Play Goal just fourteen seconds into the Crimson man advantage.

The two teams traded penalties again when Colton Kerfoot was whistled for Roughing at 12:45 and Harrison Markell was called for Hitting From Behind at 15:22. Neither team was able to capitalize. Dartmouth had the best chance to close out the final minutes of the first. O’Connor sped past Gornet and tried to slip the puck by him but the keeper was able to stick his leg out enough to stop the puck. O’Connor had a chance on his own rebound but couldn’t jam the puck between Gornet’s skate and the left post. Dartmouth outshot Harvard 17-12 but the Crimson controlled the face-offs 16-9.

Harvard came out smoking to start the second. Solid pressure at both ends. Jack Drury threw a shot on Clark from the right side of the net, the rebound went all the way to Fox at the left point. Fox made a nifty pass to Michael Floodstrand in the slot. Floodstrand turned and fired a wrist shot past Clark to tie the game at 2-2 at 2:29.

Dartmouth was now playing with fire as Will Graber was called for Tripping at 4:53. Seven seconds later Shane Sellar was called for High Sticking giving the second best power play unit in the country a five on three for almost two minutes. The Crimson peppered Clark and the glass behind him with shots. Finally at 6:44 Riley Walsh put Harvard ahead 3-2 when he took a Fox feed in the right slot and blasted it by Clark.

Dartmouth was clearly playing frustrated after this turn of events. An Interference call on Harvard’s Baker Shore at 11:12 gave a chance on the power play. It only took Foreman eighteen seconds to tie the game when he knocked home a Connor Yau cross-crease feed. Foreman was all alone behind the Crimson defense.

The pace of this period was fast and furious, with each team up and down the ice, trading chances. Harvard had a solid two on one with Wyllum Deveaux and Jack Badini with Badini unable to get a shot off. Alex Jasiek had a bid for Dartmouth that Gornet stopped. Then Fox had a chance for Harvard.

At 19:46 of the period Dartmouth appeared to take the lead when Foreman stole the puck on the left boards and raced in on Gornet, who made the stop, but the rebound was tapped in by Carl Hesler. Upon review, the goal was overturned due to goalie interference as Foreman took Gornet out of the play in his crease. The period would end in a 3-3 tie, with Harvard outshooting Dartmouth 13-10 and continuing face-off dominance 15-8.

The third period opened with a Badini chance for Harvard, but Clark was able to keep the puck squeezed in his pads. The period was back and forth with neither team having a solid chance. Dartmouth had a power play at 12:27 when John Marino was called for Contact to the Head – Elbowing. It was an uneventful two minutes. Dartmouth did have a chance around the 3:30 remaining mark but Gornet was able to make two successive stops on Graber and O’Connor. In the final minute the teams traded rushes as Gornet stopped Graber and Clark stuffed Drury. This one was going to need extra time to decide it. Dartmouth outshot Harvard 10-9 and cut the face-off battle to a manageable 13-12 deficit.

This overtime would be Dartmouth’s second of the postseason. They lost to St. Lawrence last Saturday 3-2. Dartmouth for the season (including last weekend) is 1-2-4 in overtime, with their lone OT win against Harvard  7-6 to open the season in Hanover on October 27. The Crimson are 2-3-2 in extra time this year beating Clarkson 4-2 and RPI 3-2 in their last two OT games.

Nathan Krusko would end Dartmouth’s season at 2:06 of Overtime with a wraparound that found it’s way through Clark’s legs. Jack Badini got the assist. And with the win, Harvard is off to Lake Placid for the fifth straight year.

”I thought we were forced to respond to their compete level in the first period,” said Harvard coach Ted Donato. “It wasn’t our game plan obviously. That’s a very good team, a very proud team, very well coached. They play hard, very good in the neutral zone. I’m not sure all series if we were ever really able to get the puck going quickly as we wanted up and down the ice.”

For Donato, it was important to have kept it close after going down 2-0 in the first.

“I thought our goaltender made some saves there to keep it 2-0, keep it 2-1,” Donato said. “That might be easily overlooked, but if you really consider some of the chances they had early I thought he made some big saves for us.”

Dartmouth Coach Bob Gaudet, who was visibly upset after the game.

Gaudet continued, “A big play with fourteen seconds left in the second period would have been really nice going into the locker room and coming out with a 4-3 lead. I like our chances with that in the third period. Just wasn’t’ meant to be and I was really proud of the way the guys performed. They’re a good team, Harvard’s got a really good team.”

With that Dartmouth’s season is over, it was a strong season with lots to build on going forward. It hurts to lose at Harvard for the second straight year. But the Big Green have a solid core of forwards and strong goaltending.

The Crimson will play next Friday in Lake Placid and are still awaiting the winner of Union vs Cornell to determine seeding.