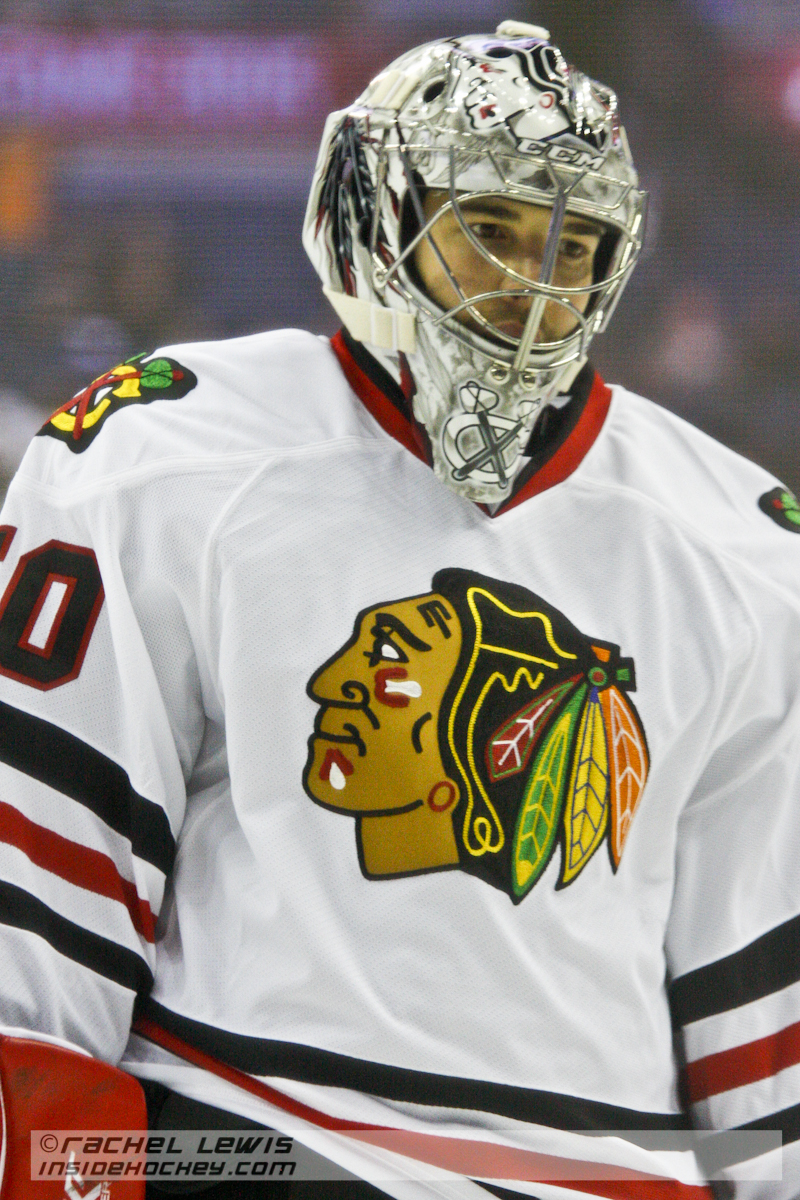 Corey Crawford of the Chicago Blackhawks.

The LA Kings were going to exit Wednesday out of the playoffs no matter what they managed to do against the Chicago Blackhawks. They entered the night at 52 points, three behind Calgary for the West’s last wildcard spot. Their one advantage was a game in hand on the Flames, who were idle while waiting to play first the Wild and then Edmonton Thursday and Saturday.

So it didn’t hurt that the newly Richards-less team put up a good show against the team they knocked out of the Western Conference playoffs in round three last year. Of course, it wasn’t obvious from the first that LA was going to show well, because the Kings have done nothing particularly well of late.

They describe their relationship with the Hawks as “respectful” on both sides. It’s a rivalry, of course, but with both squads having won recent (multiple) Cups, the rivalry is more that of gentlemen sportsmen than angry feuding relatives. But if there’s one difference between the two clubs, it’s in goal production, with the Kings having scored 129 and Chicago 148 coming into this game. Their differential numbers are really the key, though, in understanding why the Blackhawks have 62 points to the Kings’ 52. The team from Illinois is up by 40. Los Angeles is also positive.

Plus three. That’s not going to get it done.

The game was exciting, but wait for that.  Aside from the game, what stories are floating around the team this week? You already know that Mike Richards was sent down to the minors. No big deal, except that he’ll be earning about 4 million bucks more than most of his teammates. What GM Lombardi expects is simple. He needs to get his game back. Find his game. Whatever the cliché is.

So what makes the team think that the hockey gods hid it in Manchester, New Hampshire? (Not a real question.)

In any case, if he survives in the AHL that long, next year will make Richards’ commute much shorter, as is true for anyone else moving up and back between the farm and the parent club. Five teams, including the Manchester Monarchs, are set to come West. What this means is that what is now the longest trip between any pro club in sports and its farm team will be cut down to a car commute.

Now, it’s tempting to make an LA-freeway joke here. Something like this:

“How long does it take to get to Ontario, CA, from LA on Friday afternoon?”

“Not much less time than it takes to fly to Manchester, for a Monarchs game.”

In truth, if the AHL plays Friday games, it’s a pain to get out to what will then be the former arena of the ECHL Reign. It’s probably two and a half hours from where the Kings now practice and where a lot of the players now live. But certainly this move from East to West will make the life of the team and the call-ups much, much easier.

Think about it. Deciding to send a guy on an entry-level deal up or down involves a major, all-day endeavor to fly from one corner of the country to the other. It’s not just that you have to allow an extra day for travel. It’s also the hassle and wear on the player. And then, there are times (more with the Ducks than the Kings, though that commute is much closer, just Virginia) when guys get called up and don’t play. Back they go, another day in their lives wasted on airplanes.

How easy it must be to be the Toronto Marlies, right there in town with the NHL club they support! (Yeah, really helps the NHL club increase its success, eh?) Well, now the Kings, Ducks, Sharks, Flames, and Oilers (though the latter two don’t gain nearly as much, as far north as they are) will be much more like them in terms of their ability to move guys and get looks at players, because each will have a farm club in California.

In other news, the Kings came into the game with the Hawks at 2-3-5 in their last ten games. On the season, they were the worst team in the NHL in one-goal games, with a 5-6-12 record. They were and are 1-7 in shootout games. And they have a road record of 5-9-6. Yikes. They play the majority of their remaining games on the road, and the projection is that they need between 93 and 96 points (thanks, www.frozenroyalty.net) to make the playoffs. The exact numbers on their road-home ratio is that 21 of their final 35 games are road affairs.

So what’s going to happen? If things work they way they have lately, the LA team will rally, start scoring, and make the playoffs. First, eighth, who cares? They just need to make it, as they’ve proved. And they helped themselves on Wednesday by ending up with a 4-3 win against the Hawks, the win coming on a late third-period surge and a couple of lovely goals.

But if this win is not followed up by more, they could do what looks more likely, and end up out of the race for the Cup because they can’t get scoring combinations together that work consistently. Their top three scorers at the moment are Gaborik (15 goals) Carter (14, including the two on Wednesday), and Williams (13), none of whom play on the same line.

By contrast, the Blackhawks have 53 from their top three players. That’s obviously ten more than the top three guys of LA. But think about it. That also means that everyone else on Chicago has 98 goals. Everyone else on the Kings has 91. Secondary scoring, blah, blah, blah, but it’s not for nothing. It matters, and LA falls short in that regard by close to enough goals to propel them past everyone else in their division in terms of scoring production.

The Chicago game, by the way, saw LA come back with about six minutes to go in the form of a regular-strength goal from the high slot by Tyler Toffoli (returned from mononucleosis) on a pass from Dwight King. At 3-3, the Kings scored again, right off a faceoff. This time it was Muzzin from the point, to make it 4-3.

After the game, Sutter said but two interesting things in the less-than-two-minute-but-still-a-waste-of-time press conference he held. One was to ask whether Brown had touched the puck on the last goal. The other was to say that he was happy with the Carter line and unhappy with the others.

The Kings now vacate Staples Center for two weeks for the Grammy awards. As was said, their road record is awful.

Perhaps Coach Sutter should try the approach of that football player and simply answer all questions in the post-game scrum, “I’m only here because they’ll fine me if I don’t show up.”

Gretzky just had a birthday. You can celebrate buy picking up my new book, Facing Wayne Gretzky. Thank you.