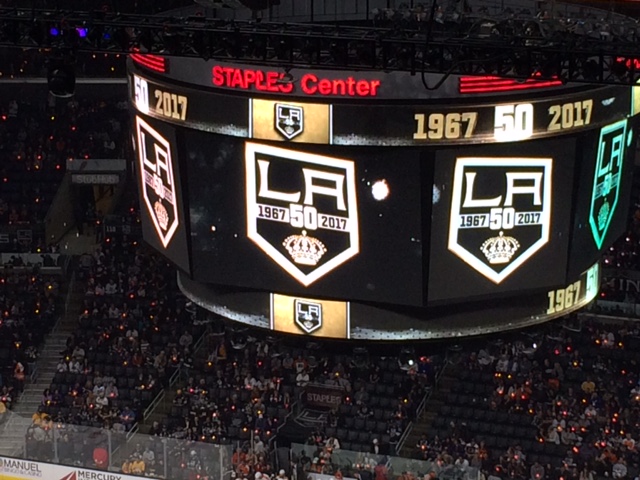 “It was fifty years ago today, Red Kelly taught the boys to play; they’ve been going in and out of style, but they’re guaranteed to raise a smile.” With apologies to the Fab Four, this is the lyric for October 14th, 2016, which is forty-nine years to the day when the LA Kings brought hockey to SoCal.

OK, stop the train. Those of you who know hockey history will recognize that the game goes back way farther than that in California, but this was the date that the NHL played its first regular-season game there. And yeah, it was a year short of the half-century that the Kings celebrated on Friday night with the kickoff of their anniversary year, but this game versus the Flyers was the start of the fiftieth season.

C’mon—why celebrate next year when the fiftieth is over? The Kings are doing it big all year, with guest nights, heritage broadcasters doing some of their away games, a new statue to be unveiled in a couple of months, and more, all of it to be covered here so that you have an inside look at what the team has crafted, not to mention coverage of the current goings-on.

But back to the matter of how history relates to the present. Look at the differences from 1967. The team plays in deep downtown, a zombie industrial wasteland as late as twenty years ago, when Staples Center was first conceived. They have a lovely arena. They sell out every night.

In the past, as the joke goes, you called the box office at the Forum and asked what time the game was and they replied, “What time can you be here?” And “here” was, originally, the Long Beach Arena, still standing as part of the convention center there. The Ice Dogs used to play this old-school concrete bowl. Now the only time it’s used is for trade shows. During the Long Beach Grand Prix, it is the site of the kids’ fair—jumpy machines and bouncy-ball castles and that kind of thing. Some years, they have motorcycles jumping ramps in there. From there, the Kings played at the LA Memorial Sports Arena. Their building in Inglewood was finally finished near mid-year in their first season. They occupied it for three decades before moving downtown.

Let’s just say that today is a far cry from the opening night of the LA Kings’ life, when people like Brian Kilrea played—he scored the first goal in franchise history. Other names on the first-year roster included Terry Sawchuk, perhaps the greatest goalie ever, Bill Flett, and Eddie Joyal. You have to have been a hockey fan then or in the early 70s to remember some of these names, and the faces that go along with them.

Some of the first-night players were in attendance on October 14th, the anniversary date. Thirteen of them, as a matter of fact, by my count. And while the names might not be familiar—Mike Corrigan and Bob Wall perhaps excepted—the spirit that connects the past to the present team could be felt as these guys were introduced.

Now in this fiftieth year, the Kings have a history which matters.

And while they it came belatedly, they now have the Stanley Cup banner—times two—hanging in their rafters. Imagine if that had not happened in 2012 and 2014. They’d be the sad sack of the expansion squads.

Now you could argue that they are easily on a par with two of the other “second-six” teams, Philly and Pittsburgh. Each has at least two Cups (the Pens four, with this year’s) and a pack of stars, present and former, who have worn the team’s colors.

You could further argue that the Kings have long surpassed the other surviving expansion team, the St. Louis Blues, those perpetual never-quites who went to the Finals in the early years only because the league set it up so that one of the expansion teams would be there in the first three seasons post-expansion.

And if there’s any doubt about the other two squads who came in in 1967, well, let’s just say that the Minnesota North Stars (Dallas Stars) have just the one disputed Cup, and not in Minnesota, and that the California Seals/Oakland Seals/California Golden Seals/Cleveland Barons/North Stars hybrid, with their white skates and pathetic rosters, were never more than a promoter’s notion of what a hockey team should be.

But in LA, along the way there were so many greats. Dionne. Taylor. Gretzky. Vachon, belatedly voted to go to the Hall of Fame in the class that enters this year. Did that have anything to do with the coincidence of the anniversary? Don’t know, but it occurs to me just now that it might have. That’s not to discount the campaign mounted by various media members on the West Coast including Frozen Royalty’s Gann Matsuda, long a champion, as I have been, of Rogie and his quite legit stats and accomplishments.

The Triple Crown line (Dionne, Taylor, Simmer). If you missed the game, you missed seeing them, along with Gretzky, Vachon, Robitaille, and Rob Blake. This might be the only time ever that all of them will be on the ice together, and the TC Line was skating, not just walking the red (actually black) carpet. What fun!

LA’s not what it was. There’s a hockey culture, deeper now than ever before, represented by the kids (and adults) who play and the fact that it’s no longer an oddity that some of them get drafted and make the NHL.

Like it or not, Easterners (and fellow Canadians), hockey’s out here, and it’s thriving. This year, the LA franchise celebrates itself for its part in that success.

Look for another story on the actual game in a day or so.

Quick is out—perhaps for a long time. I’ll report on that also in the next piece.

Follow me on twitter @growinguphockey, and read my books, please. There are six on hockey so far.