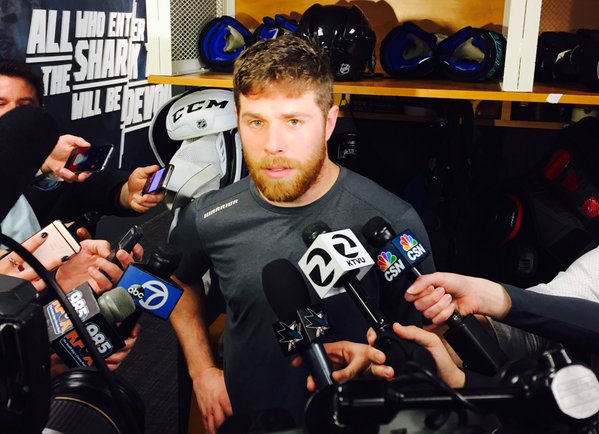 Joe Pavelski scored twice while Martin Jones made 24 saves to help lead the San Jose Sharks to a 5-1 win over the Nashville Predators in Game 5 of their second round Western Conference playoff series. The Sharks now hold a 3-2 lead in the series.

Both teams had little time to unwind after Thursday night’s controversial triple-overtime thriller in Nashville. Entering Game 5, each team has won both games on home ice. Shockingly, the Sharks won the first two games in San Jose before losing twice in Nashville.

Team Teal certainly put on a show for their sellout crowd of 17,562 on Saturday.

The Sharks took a bite out of the Predators when Joonas Donskoi made an excellent pass to  Patrick Marleau who shot a one-timer to beat Pekka Rinne, giving San Jose a 1-0 lead at 10:47.

Brent Burns created plenty of havoc, but it was Pavelski who captured people’s attention with a pair of goals.

“The guys really wanted it,” Pavelski said. “We felt after that last game we played a couple really good periods, some of our better periods of the playoffs. We had to carry that. It was up to us to really get that momentum back. Guys did a good job coming out.”

Mike Fisher scored a strange goal at 15:40. Fisher received a nice pass from James Neal in front of the net, and scored on a one-timer to tie the game 1-1.

But the Sharks responded quickly. Pavelski finished Joe Thornton’s beautiful pass and one-timed a shot past Rinne to put San Jose ahead 2-1 at 17:21.

The Sharks led the Predators 2-1 after 20 minutes, outshooting Nashville 13-11.

The Sharks took advantage of a Predators turnover early in the second period. Logan Couture went five-hole on a breakaway for his fifth playoff goal, extending the Sharks’ lead to 3-1.

“I thought we were pretty good for 60 minutes,” Couture said. “That was probably the best we’ve been since the L.A. series (a five-game first-round win). We got better in Game 4, played really well tonight.”

Brenden Dillon went to the penalty box after getting called for interfering with Cody Sissons. The Predators went on their first power play of the game, but the Sharks killed off the penalty, and the game resumed at even strength.

Roman Josi was called for tripping Couture. Shortly after, San Jose capitalized on their first power play. Marleau found Pavelski, who roofed a one-timer for his second goal of the game to expand the Sharks’ lead to 4-1 at 19:22.

The Predators received their second penalty when Ryan Johansen was called for unsportsmanlike conduct against Paul Martin.

An immediate call was made with only three seconds left in the second and Joel Ward was given a high sticking double minor penalty as a result of harming Paul Gaustad.

The Sharks led the Predators 4-1 after 40 minutes, outshooting Nashville 20-16.

The Predators’ power play was carried into the final period, but it didn’t actually start until 1:48 due to 4-on-4 hockey.

There were four penalties handed out at 16:01 of the third period. Johansen and Mike Ribeiro were given 10 minute misconducts, while Johansen and Thornton also earned minors.

San Jose went 1-for-3 on the power play, while Nashville went 0-for-3.

The Sharks took a 3-2 series lead with a massive 5-1 win over the Predators. Martin Jones made 24 saves for San Jose. Pekka Rinne made 23 saves for Nashville. In addition, Carter Hutton made one save during his brief 3:00 TOI.

Head coach Peter DeBoer was satisfied with Marleau being in the second line.

“That was Patty’s best game of the series. That line was excellent all night,” DeBoer said. “Some changes work, and that change worked.”

However, DeBoer is sensible about the series.

“We’re getting more contributions, playing better as a team, and we’re going to carry that into Game 6,” DeBoer said. “Because they’re not going to roll over, and we all know that.”

Notes:
The Sharks made their first lineup change of the postseason heading into Saturday night’s vital Game 5. Dainius Zubrus replaced Tommy Wingels on the fourth line.

Zubrus has not participated in a playoff game since the 2012 Stanley Cup Final, when the New Jersey Devils – also coached by Peter DeBoer – lost to the Los Angeles Kings. He played in all 24 games for New Jersey, posting three goals and seven assists, during a playoff run that fell just short of a championship.

Up Next: The series will shift to Nashville for Game 6 on Monday with the puck drop scheduled for 8:00 pm CT on CNBC, TVA, RSN.