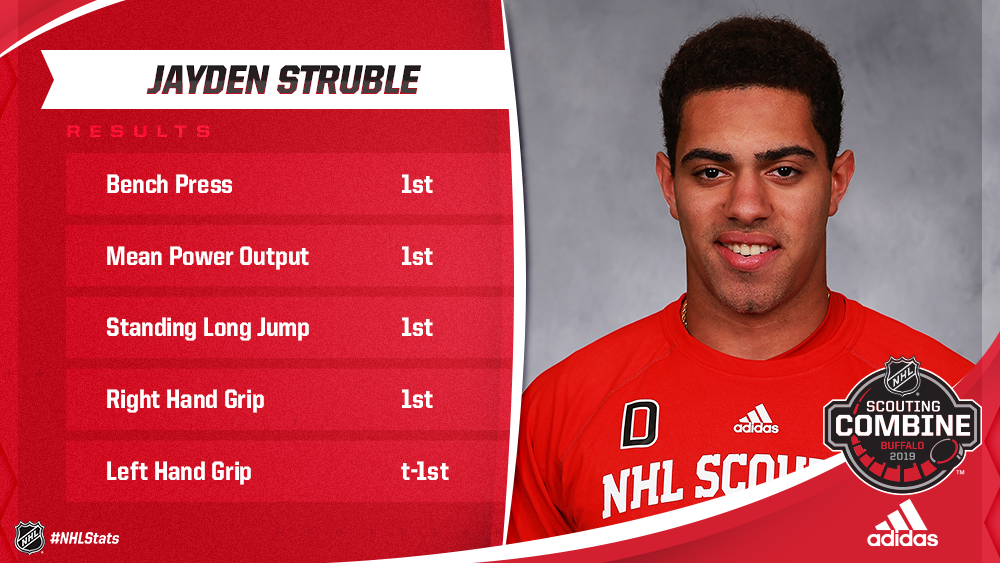 The 2019 NHL Scouting Combine presented by Adidas, featuring 103 players eligible for this year’s draft, concluded Saturday with fitness testing in Buffalo. Jayden Struble, a defenseman from St. Sebastian’s School in Needham, Mass., finished first in 5 of the 18 fitness tests.

A dominant puck-moving offensive defenseman, Struble has a hell-bent stride and excellent acceleration. He possesses tremendous speed, but he often gets caught deep in the offensive zone and sometimes takes time to come back to his position. Using his solid frame, he protects the puck very effectively. Possessing a long reach and an active stick, he’s able to disrupt attackers. He’s almost uncanny when defending rushes. His excellent stick work in his own end allows him to cut off passes and block shots. He can catch even the speediest of forwards on partial breakaways thanks to his high top speed and long reach. He plays with a feisty edge and loves to get into physical battles. He goes out of his way to finish his checks and fights hard for the puck in corners. He stickhandles at high speed with his head up, which allows him to adapt to the action quickly and dodge opponents effortlessly. He has excellent puck skills and great agility, which makes him quite deceptive and tough to stop for opponents. He has an average wrist shot, and he finds shooting lanes very well. He distributes the puck very well and makes quick passes to open the play in all three zones. Already pretty mature physically for his age, he has some great tools, but like most prospects, he’s still a bit raw in terms of his game and his potential.

“Jayden’s an exceptional talent, he’s got a tremendous amount of skill, he makes players around him better,” said St. Sebastian coach Sean McCann. “So what we see out of him is a kid who’s a difference maker.”

“When you look at him, physically, the way he’s built, and the way he conducts himself off the ice in preparation for games, and the way he plays, he’d be a great choice for any team,” McCann said.

No stranger to big moments as a two-sport star he and his teammates from Cumberland won the U.S. championship at the 2014 Little League World Series. The former star first baseman has given up the diamond to focus solely on hockey. “It was enjoyable being that young on a big stage. It helped me with not getting nerves on a big stage, and it was fun meeting kids from all over the world,” said Struble. He will attend Northeastern University this fall. Important note: His USHL rights are owned by Tri-City NHL arrival: 2022-23