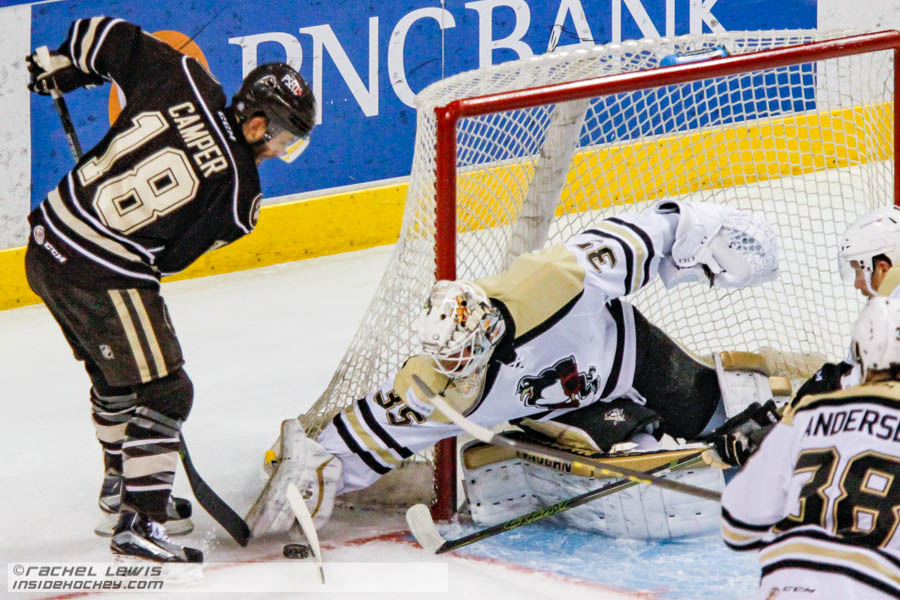 Jarry Not Throwing Away His Shot

Like Matt Murray before him, Tristan Jarry is getting his break after an injury to the Penguins’ starting netminder. And he’s taking full advantage.

For Murray, that chance came in December 2015, after starter Marc-Andre Fleury suffered a concussion. He played 13 regular-season games before Fleury returned, only to be sidelined again, and Murray led the Penguins on a magical run to the 2016 Stanley Cup.

Now Murray is the Penguins’ starter, out week-to-week with a lower-body injury after a collision with the Flyers’ Jakub Voracek on Monday. And Jarry – who signed his entry-level contract right alongside Murray back on Sept. 4, 2013 – is running with the opportunity.

The Penguins already placed a big vote of confidence in Jarry when they called him up in late October. Bringing in veteran backup Antti Niemi hadn’t worked out, so Pittsburgh wanted to see what they had in the 22-year-old netminder before deciding whether to trade for goaltending help.

After starting his NHL career 0-1-2, Jarry got his first win last Saturday in a 5-2 win over the Tampa Bay Lightning. He stopped 33 of 35 shots from the league’s top team, like this beauty on Nikita Kucherov, the league’s top goal-scorer.

That's gonna be a hard nope on that shot. pic.twitter.com/n23iDiSGxB

Jarry also notched his first NHL point, picking up the lone assist on a shorthanded breakaway goal from Bryan Rust.

The win ended a three-game losing streak for the Penguins, and lifted them back into an Eastern Conference playoff spot. It was also the first time in seven tries that Pittsburgh won the second game of a back-to-back set, of which they have a league-high 19 this season.

Jarry certainly wasn’t dreaming of his longtime friend limping off the ice on one leg in Monday’s contest against the Philadelphia Flyers. But, with 4:21 remaining in the second period, that’s exactly what happened.

Matt Murray and Jakub Voracek collide and Murray has to go to the locker room… hopefully Murray is okay! pic.twitter.com/s4IIRx9Io3

Jarry didn’t have much time to think. As is the job of a backup goalie, he trusted that he was mentally prepared and went into the game, with Philadelphia leading, 2-1.

Late in the period, the Flyers’ Sean Couturier beat Jarry to make the score 3-1. The Penguins mounted a comeback to tie it, 3-3, in a 39-second span early in the third – until, with 3:41 remaining in the contest, Michael Raffl gave Philly the lead again with an unassisted backhand.

Jarry, though, responded with an unflappability that belies his youth, much like the goalie who came through the Penguins’ ranks a year ahead of him.

“You’ve just got to stay calm and stay how you usually are,” Jarry said. “I think one of my biggest traits is that I’m able to forget things very quickly, and that was needed after a goal like that. I can’t let that one bother me; it has to be something I can push aside and take on another day.”

The Penguins went on to tie the contest again with just over a minute remaining, then win it 1:48 into overtime, on goals from Jake Guentzel and captain Sidney Crosby. And Jarry took the back-and-forth contest in stride, viewing it as an opportunity to learn.

“These are fun games,” he said. “It’s fun when it goes back and forth. It might not always be the score you want, but it helps you with your mental game, helps you focus on the things you need to focus on. That’s one thing Buck [goaltending coach Mike Buckley] has really helped me with.”

After the game, head coach Mike Sullivan again gave Jarry a vote of confidence, implying that the net was his if Murray was out.

“We believe he’s a solid goalie,” Sullivan said. “I think the game he played against Tampa is a perfect example of what he’s capable of. Tristan’s going to have to make timely saves for us game-in and game-out, and we believe he can do that.”

Jarry made good on his team’s faith Friday, recording his first NHL shutout with a 34-save performance at Buffalo. Although things aren’t going well for the last-place Sabres, they made Jarry earn it with big stops off of his pads, his stick and his glove.

That puck stayed out.

“He’s calm but he competes really hard, that’s something you can tell right away,” Crosby said. “He reads the play really well. There are times where, as a goalie, there’s no way to really draw it up. You’ve just got to find a way to compete, find loose pucks and get something on them. He did that again tonight. He’s been doing that since he’s been playing here, and it’s great to see him having success.”

“He’s a real good goalie when he’s locked in,” Sullivan said, “and he certainly was that tonight.”

The shutout made three straight wins for Jarry, who’s now 3-0-2 with a 2.21 goals-against average and .929 save percentage in five games played this season. But he’s taking nothing for granted.

“There’s always room for improvement, and there’s things I can take away from [each game] and challenge myself to be better with,” Jarry said. “Every day I want to earn their trust a little bit more. It starts in practice, then getting in games and showing them what I can do.”