West Springfield, MA- American International College and Bentley Unversity were scheduled to face off in both the 2020 and 2021 postseasons. Neither series happened. The entire 2020 college hockey season was canceled due to the start of the Covid pandemic and Bentley had players test positive for the virus shortly before the 2021 meeting. Finally, after three years of waiting, the Yellow Jackets and Falcons met for the Atlantic Hockey Quarterfinal series. Game One did not disappoint.

One other wrinkle for the series: AIC’s normal home, the MassMutual Center, is unavailable due to Disney on Ice showing up for the weekend. So the series moved to the Olympia Ice Center, the Jacket’s old home rink. The result was a chippy, loud, and quick matchup on a shorter ice surface than the MassMutual Center. It rewarded snappy play, which rewarded Bentley early.

New Hampshire transfer Kohei Sato struck first with a brilliant solo shorthanded breakaway goal 8:33 into the game. Jackets Head Coach Eric Lang described Sato as “probably the fastest player in all of college hockey,” after the game. The Falcons would outshoot the Yellow Jackets for the first period and control the pace of the frame. But only 1:11 after Sato’s shorthanded goal and on the same power play, UNLV transfer Elijah Barriga tied the game with is eight goal of the season. Late in the frame, Chris Theodore banged home his 10th goal of the season to put AIC up 2-1 at the break despite being outshot 9-7.

Bentley employed their speed to tie the game 2:37 into the second. Senior Dylan Pitera banged home the equalizer, his seventh goal this season. AIC picked up their pace and rhythm as the frame went on and were rewarded. Jake Stella notched a power play tally in the last minutes of the frame, for his 11th of the season and a 3-2 Jackets lead going to the second intermission. 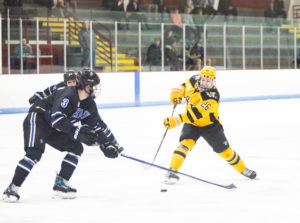 AIC outshot Bentley 13-9 in the final frame and added two more goals to the tally to secure a 5-2 win. Minnesota State-Mankato transfer Chris van Os-Shaw scored the fourth goal 12:14 into the third and Alaska-Fairbanks transfer Justin Young potted an empty netter to finalize the score.

“I don’t think they got the best version of us tonight,” said Coach Lang after the game. “We’re gonna be better tomorrow.”

Game two of the quarterfinal series at the Olympia Ice Center on Saturday night. AIC advances to their third straight Atlantic Hockey semi-final with a win. Puck drops at 7:05 PM.