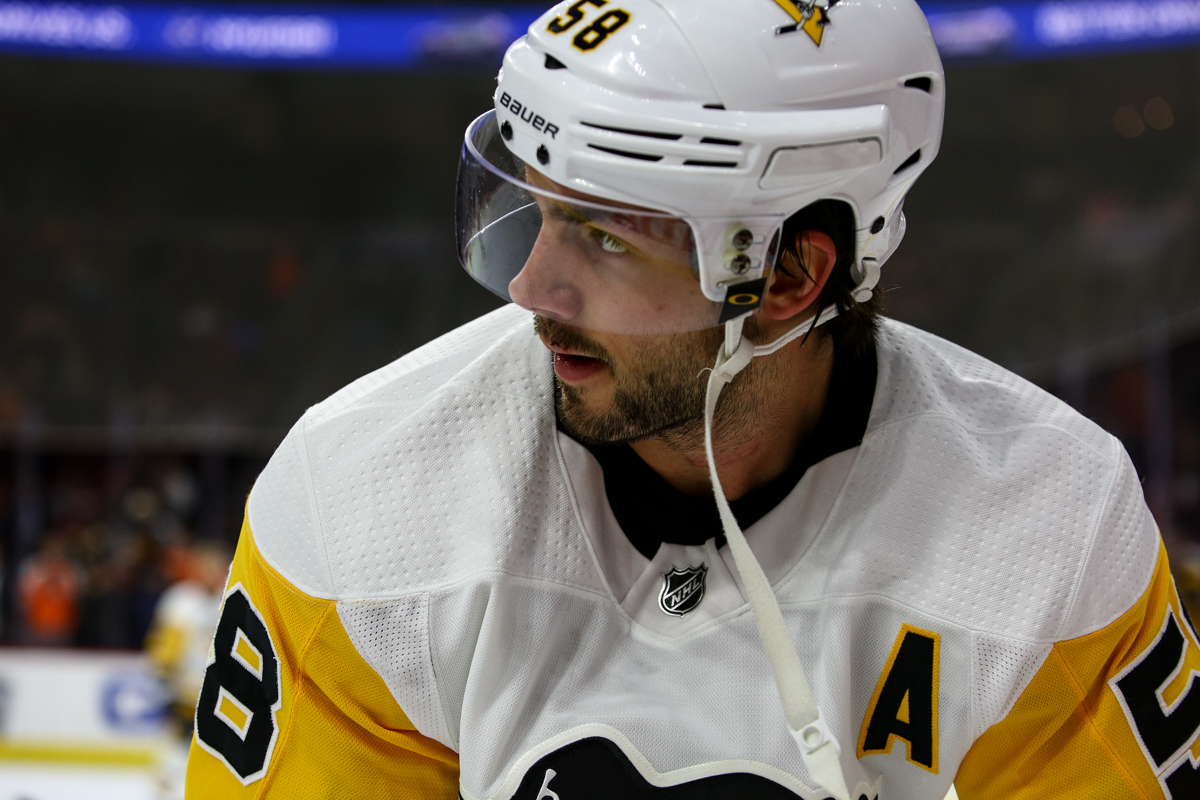 ‘It Says a Lot About Him as a Player and Person’

If you’re a Penguins fan who wasn’t thrilled with Kris Letang’s play in the early going, you’ll have to get in line behind the man himself.

Letang showed up to training camp this year with only a week of skating under his belt. Surgeries like the one he had on April 13, to repair a herniated disc in his neck, have forced other athletes into early retirement. But Letang, who’s come back from serious conditions like concussions and a stroke, somehow didn’t expect to miss a beat.

“When you’re fit, conditioning-wise, you think it’s going to be all right,” the 30-year-old defenseman, whose offseason training regimen is the stuff of legend, said earlier this month. “But it was not.”

Through Dec. 31, Letang was right back to leading the Penguins in ice time, playing an average of 25:46 per game. But he also led the team with 55 giveaways in 37 games, and was a team-worst minus-15.

Head coach Mike Sullivan spoke often about Letang needing to take what the game gave him, a tactful way of saying he needed to make better decisions with the puck. But Sullivan also believed the only way for Letang to improve was to play through it.

“Sully kept playing me,” Letang said. “He knew I’m the kind of guy that builds up a workload. That’s how I get better. He kept having confidence I’d improve my game by playing the minutes I should be playing.”

Letang isn’t a fan of advanced stats, preferring to assess his game by situations. But the numbers show his game has indeed improved as the season has progressed – since the start of the new year, for example, he’s No. 8 among defensemen with a 57.26 shot-attempts percentage. It’s probably not a coincidence that the team as a whole started trending up around the same time.

Letang’s commitment and perseverance is why he’s the 2018 Masterton Trophy nominee for the Pittsburgh chapter of the Professional Hockey Writers Association. It’s the third time he’s been nominated for the award.

“It’s not easy,” said Penguins captain Sidney Crosby, who knows a thing or two about working back from a serious injury. “It takes time, and he has the mindset and the attitude to go through something like that and find a way to get back to the form.

“It’s such a big surgery, and I think a lot of people realize how tough that is. The fact that he’s back playing, and playing the way he is, is pretty incredible. It says a lot about him as a player and person, and what it means to him to be able to play at this level and play well for us.”

The coach who preached patience to his top blueliner isn’t surprised he’s rounding into form.

“He’s an elite player,” Sullivan said. “He’s a real good, two-way defenseman and, when he’s playing at his best, he’s one of the top defensemen in the league. There aren’t a lot of defensemen that can handle [his] workload. He’s a real fit guy; he prides himself on taking care of himself. He’s a great skater. And, because of that, he can handle a lot of minutes, night-in and night-out.

“That’s what he brings to this team. It doesn’t surprise me; I’ve watched it time and time again.”

Letang is top 10 in the league with his season average of 25:20 played per game. That’s an impressive workload for any player, let alone one who’s working his way back from a career-threatening injury.

“It’s one thing to want to get back to being healthy and playing the game again,” Crosby said. “But to accept that role and be willing to do that on a nightly basis is pretty difficult. Whether it’s taking hits or giving them, and getting up and down into the play, those are a tough 25 minutes. It’s pretty incredible.”

For Letang, who had to watch the 2017 playoffs and Stanley Cup from the sidelines, it’s all about staying on an upward trajectory as the most important part of the season arrives.

“I’m starting to play a little bit better,” he said. “Hopefully, I’m going to hit my best stride when we get into the playoffs.”