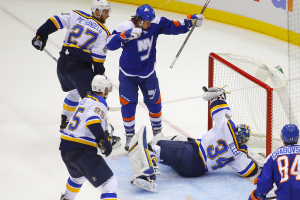 The New York Islanders had a 3-0 lead after 20 minutes, but then they got into the holiday spirit. They were giving rather than receiving and a visit from the ghost of goalie’s past didn’t help either. Old foe Martin Brodeur started the second period for the St. Louis Blues who dominated the final 40 minutes and beat the Islanders 6-4. Brodeur made 14 saves to earn his first win of the season and his first NHL win for a team other than the New Jersey Devils.

After a solid first period, the Islanders stopped skating and saw the Blues dictate the pace of the game. St. Louis also scored three goals on five power play chances which helped turn the momentum around.

The Islanders broke out on top on a power play goal by Frans Nielsen at the 7:57 mark of the opening period. Kyle Okposo’s cross ice pass found Nielsen alone in the slot and Nielsen easily beat Blues’ starter Jake Allen who didn’t have time to react and get across his crease.

Ryan Strome made it 2-0 Isles when he intercepted an errant clearing attempt and beat Allen with 1:59 left in the opening period. Then, Michael Grabner netted his first of the year with 20.9 seconds left and it was 3-0 Islanders after 20 minutes.

Blues’ head coach Ken Hitchcock removed Allen, who allowed three goals on 12 shots, and replaced him with Brodeur. The Blues then dominated the last 40 minutes of play, outshooting the Islanders 30-15.

“They played the second period exactly how we want to play,” Islanders head coach Jack Capuano said. “They shot everything to the net, they converged on rebounds they had a lot of zone time and they grinded it out. Give them credit. That’s what good teams do and that’s how we normally play.” 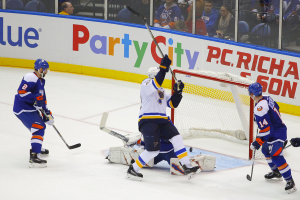 Paul Stastny scored his first goal of the game on the power play at 2:36. Then, Patrik Berglund tallied less than two minutes later.  Kevin Shattenkirk scored on a blast from the point at 12:34 and the Islanders’ lead was gone.

The Islanders managed to regain the lead in the final minute of the second period, taking advantage of a questionable penalty call against Stastny. John Tavares converted the opportunity, beating Brodeur at 19:06 and the Islanders were clinging to a 4-3 lead after 40 minutes.

“We weren’t happy with the 2nd period,” Matt Martin said. “It was a very disappointing period. We didn’t come out and didn’t play physical. They took it to us more than we took it to them.”

The Blues controlled most of the third period as well. T.J. Oshie’s power play goal tied the score at 4:51. Stastny scored the game-winner at 13:26 on a one-timer from the right circle. He was unchecked in prime scoring postion. Vladimir Tarasenko added an insurance goal from nearly the same spot with 2:28 left on the clock.

The Islanders were stunned and disappointed after the game after letting the 3-0 lead slip away.

“We played too much without the puck today and had to work to get it back,” Tavares admitted. “They did a good job of pushing the pace on us, the way we wanted to play. We just didn’t execute at a high rate.” 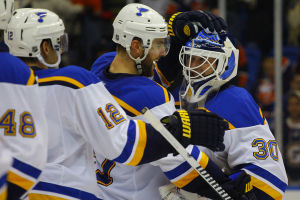 The game had to be a disappointment for Isles’ goalie Jaroslav Halak. He allowed six goals on 40 shots and saw his team-record 11-game winning streak come to a close. He also lost to the team he spent most of the previous four seasons playing for.

Meanwhile, Brodeur was back in familiar surroundings. He has now won 24 games at the Nassau Coliseum in his career, more than any other road venue he has played at.

Despite the loss, the Islanders remain confident. “You learn from your mistakes, Martin said. “We’ve been playing good hockey and this is a bump in the road. We have to come back to work Monday and get ready for the next game.”

The next game will be Tuesday night when the Islanders travel to Minnesota to face the Wild.

The Islanders honored Bob Nystrom before the game. Nystrom scored the Cup-winning goal against the Philadelphia Flyers in 1980, the year the Islanders won their first Stanley Cup and remains one of the most popular players in team history. He dropped the ceremonial first puck.

Rookie defenseman Ryan Pulock skated in pre-game warm-ups but was a scratch and was sent back to Bridgeport.

Center Casey Cizikas was injured in the third period and did not return to the game. He will be re-evaluated on Sunday.