The calendar is about to shift to November. That means there are a few things we can count on. Hockey players will grow mustaches to celebrate “Movember”, it starts getting dark outside before most people head home from work, Americans start thinking about Thanksgiving and the Islanders have their annual November swoon.

A disastrous November has become as much a part of the Islanders recent history as draft day, training camp or the home opener. The Islanders have started each of the last few Novembers with high hopes after a solid opening month of the season and seen their playoff hopes almost disappear after another horrendous month of play

The Islanders hope this is a November to remember, or more specifically, not another November to forget. After all, this year is supposed to be different. The Islanders spent money upgrading the goaltending and adding depth at forward this past summer. Just before the start of the season, they added a pair of experienced top-four defensemen. This year, the team is all in to win and give the Nassau Coliseum a fond and fitting farewell.

The Isles finished October with a 6-4-0 record, good enough to say things are definitely headed in the right direction. But if this November turns into another turkey, fans around Long Island will be thinking “same old Islanders” and much of the hope and optimism that was built up in the early season will disappear.

How bad have Novembers been for the Islanders in recent years? November has been where the Islanders’ season goes to die. The Isles have qualified for the playoffs only once in the last seven seasons. That year, there was no hockey in November because of the lockout.

Last season, the Isles went 4-10-1 in November, by far the worst month on their schedule. Take out November, and the Isles had 70 points in 67 games which would put them in the thick of a playoff race. By the end of November, the Isles were long shots to reach the postseason. They were playing catch up in the standings the rest of the year and dug themselves too big a hole to overcome.

In 2012-13, the Isles were 4-7-2 in November including a pair of four-game winless streaks. Again, the team looked improved in October, but fell flat in November and missed the playoffs. 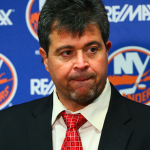 The year before that, the Islanders were 1-7-3 in November. A 13-game winless streak that began in late October cost head coach Scott Gordon his job. Jack Capuano took over behind the bench and has been there ever since.

The Isles have a tough schedule this month. They start November with four road games and three of them are against Pacific Division powerhouses like the Sharks, Ducks and defending Stanley Cup champion Kings.

Later in the month, there are home-and-home meetings with Steven Stamkos and the Lightning, Sidney Crosby and the Penguins and Alex Ovechkin and the Capitals. There are also games against division rivals like the Flyers and Devils. No doubt, the schedule is challenging.

But even a .500 record in the month of November would keep hope alive for the Islanders in December and beyond. Earn 14 points in 14 games for the month, and the season won’t be over before the end of the calendar year. Be average in November, and prove to a fan base that wants to badly to believe, that this year is indeed different. 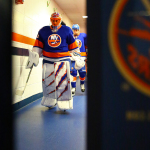 Jaroslav Halak walks to the ice. (Brandon Titus/ Inside Hockey)

There are players on this roster who know what it takes to play on a winner. Johnny Boychuk and Nick Leddy have Stanley Cup rings. Jaroslav Halak has been to the playoffs many times in his career. Nobody works harder than captain John Tavares who leads by example and his never ending desire to improve and win.

This Islanders team has more talent and depth on paper than any in recent memory. But the game isn’t played on paper, it’s played on the ice and in non-lockout years, it’s played in November.

The Islanders are telling their fans that this year is different and it should be. Here is their chance to prove it. Break even or better in November, and the confidence of the fans and the players will grow. But another fall swoon will revive calls of “same old Islanders” and may be too much for some people to handle.

Grow a mustache to celebrate “Movember,” or don’t. Just win enough hockey games and we’ll all know something is different. The next 30 days will tell everybody a lot about this year’s Islanders team. Let’s just hope it’s the message all long-term fans want to hear.