The New York Islanders let a winnable game slip away as they fell to the Winnipeg Jets 4-3 at the Nassau Coliseum Tuesday night. The Jets, who entered the game without a power play goal on the season, scored two key goals with the man-advantage to help win the game. For the Islanders, this game brought back bad memories of the way they lost key games last season.

“When you don’t manage the puck well, you won’t have success,” Isles head coach Jack Capuano said. “We didn’t deserve to win. It’s going to be a long road trip if we don’t figure this out.

“Guys have to understand this is not going to continue and if it does, guys are going to get limited ice time,” a frustrated Capuano continued. “It hurt us last year. Everybody talks about how many goals we gave up last year…It’s how we managed the puck.”

The game started out well for the Islanders who led 1-0 on a power play goal by Brock Nelson just 1:16 into the game. Nelson was able to deflect a shot from the point by Johnny Boychuk and get it past Jets goalie Ondrej Pavelec.  The Islanders outshot the Jets 9-7 in the first period and took that 1-0 lead into the first intermission. 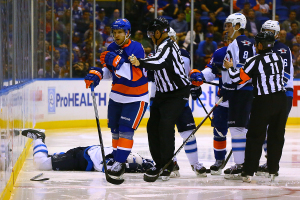 Nikolai Kulemin gets escorted away from Brad Stuart after checking him into the boards. (Brandon Titus/Inside Hockey)

But the momentum of the game changed early in the second period when Nikolay Kulemin was given a 5:00 boarding major and a game misconduct for a hit from behind on Winnipeg’s Mark Stuart. Kulemin was lost for the rest of the game and may face further disciplinary action from the NHL’s Department of Player Safety.

The Jets cashed in twice during the 5:00 power play with Andrew Ladd scoring just 50 seconds later and Paul Postma scoring at 4:06 of the middle stanza. The Jets suddenly had the lead and started to take control of the tempo of the game. Jacob Trouba scored his first goal of the season during a four-on-four situation at 11:42 of the second period to give Winnipeg a 3-1 lead.

To their credit, the Islanders did manage to regroup and even the game at 3-3 in the second half of the second period. John Tavares put home the rebound of a shot by Nelson at 14:28 to make it a one goal game and then a shorthanded tally by Mikhail Gravovski 1:24 seconds later evened the game at 3-3 heading into the locker room for the second intermission.

Ladd’s second goal of the game off the rebound of a shot by Bryan Little put the Jets ahead to stay at the 3:31 mark of the third period. It was Little’s third assist of the contest. 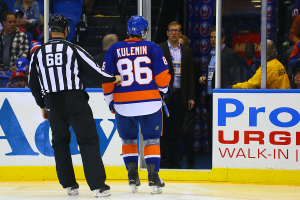 The Islanders had a power play chance late in the game but were unable to capitalize and get the equalizer.

After solid offensive play in the first period, the Islanders were limited to just five shots on goal in the second and just seven shots in the final 20 minutes.

“They did a good job of making it tough for us to enter the zone,” Tavares admitted after the game. “At times we did some good things, but that five minute power play gave them life. We battled back but we just didn’t have a great third [period]…We weren’t quick enough and we didn’t get gritty enough or dirty enough at times.”

The Islanders now head west for a five-game road trip that will see them face some of the top teams in the western c0nference including the Anaheim Ducks, San Jose Sharks and the defending Stanley Cup champion Los Angeles Kings.

“We’re going to have to go on this road trip and play some tough teams,” Kyle Okposo said. “It’s going to be a good test for our club.”

Defenseman Travis Hamonic sat out for the third straight game. Eric Boulton and Matt Donovan were the other scratches for the Isles.