The New York Islanders played their final regular season game at the Nassau Veterans Memorial Coliseum on Saturday. It’s a sad day after 43 years of hockey at the Old Barn.

The final game was a heartbreaking 5-4 shootout loss to the Columbus Blue Jackets. The Isles had a two-goal lead in the third period and watched it slip away. The loss cost them home-ice advantage in their first round matchup with the Washington Capitals. There are still a few playoff games left to be played at the Coliseum, but the end is certainly very near.

The first regular-season contest played at the Coliseum was back on October 7, 1972, when the Islanders faced off against their fellow-expansion foes, the Atlanta Flames. It was the first game that counted for both teams. The Islanders also lost that game by one goal, 3-2. Atlanta’s Morris Stefaniw scored the first goal in Coliseum history while Isles’ captain Ed Westfall scored the first goal for the home team. More than 12,000 fans showed up to see a team that would win only 12 of 78 games in their inaugural season.

Since then, the Islanders played a total of 1,665 regular-season games at the Nassau Coliseum. They finished with a record of 831-611-223, good for a .566 winning percentage. But there’s a lot more to the hockey history of the Old Barn than wins, losses and ties.

The Nassau Coliseum is anything but a glamorous destination. It never really was. The building was considered obsolete practically from the time it was built. Heck, when the Old Barn opened in 1972, it didn’t even have a press box.

If Madison Square Garden was a movie palace, then the Nassau Coliseum at its best was your neighborhood theater. It wasn’t fancy, but it was home. It always had and to this day features some of the league’s best sight lines.

But, Nassau County and the people who ran the building neglected it for years. The Coliseum really should have been replaced some time in the 1990s. Since then, it’s been a story of leaks in the roof, scoreboards declared unsafe, broken seats and stinky restrooms. The concourses are too narrow, there aren’t enough luxury boxes, there is asbestos all over the building and various other issues too numerous to name.

So why mourn the end of this dilapidated old barn? Because like any arena or sports venue, it’s not the size of the seats that makes it special or the types of food they offer, it’s the shared experience that you feel with 16,000-plus other fans that makes memories that will last a lifetime.

For some, it’s memories of going to games with their father and siblings or friends. It’s tailgating in the parking lot and singing the alternate lyrics to “The Chicken Dance” while the great Paul Cartier plays the organ. It’s honking your horn to “Let’s Go Islanders” as you leave the parking lot after a win.

Then there are the shared memories, good and bad, that have united thousands of Long Islanders for 43 years. The veteran leadership of Ed Westfall, the style of Chico Resch, the tenaciousness of Garry Howatt, the excellence of Denis Potvin, the hustle of Bobby Nystrom, the combativeness of Billy Smith, Mike Bossy’s natural goal scoring ability, Pat LaFontaine’s grace, Heals and Flats, Pierre Turgeon’s skill, the speed of Ziggy Palffy. We all watched Jason Blake score 40 and Bob Bourne go end-to-end and the coaching of Al Arbour. 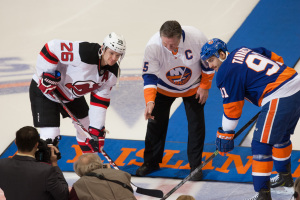 There were outstanding moments and heartbreaking ones. The magic playoff ride of 1975 when the team came of age, Nystrom’s overtime Cup winner, 19 straight playoff series, Bossy scoring 50 goals in 50 games, the unexpected playoff wins in 1993, Al Arbour’s return behind the bench, John Tavares’ first NHL goal and so many more.

During the dynasty years, the local hockey team put Long Island on the sports map. People from Moose Jaw to Massachusetts all knew where Uniondale was because the greatest hockey team in the world played there. A generation of Long Islanders grew up with pride in their hockey team.

Then there was the relationship between the players and the residents of Long Island. When he returned this season as part of the final season festivities, Denis Potvin remembered always having an invitation to somebody’s house for Thanksgiving or Christmas. That relationship continues to this day and is part of what makes the Islanders franchise special to many Long Islanders.

So an era is coming to an end on Long Island. In the end, it’s not the bricks and steel that fans will miss about the Nassau Coliseum and the Islanders time there. It’s the memories they grew up with, shared and cherished over the last 43 years. It’s part of their lives that they will always remember with a smile.

The Islanders will have a new home this fall and new traditions and memories will be made. But for a generation of Long Islanders, something is being lost forever and will never be the same. So it’s time to say goodbye to the “Old Barn.” It may be a dump, but it’s our dump, and the memories will last a lifetime.