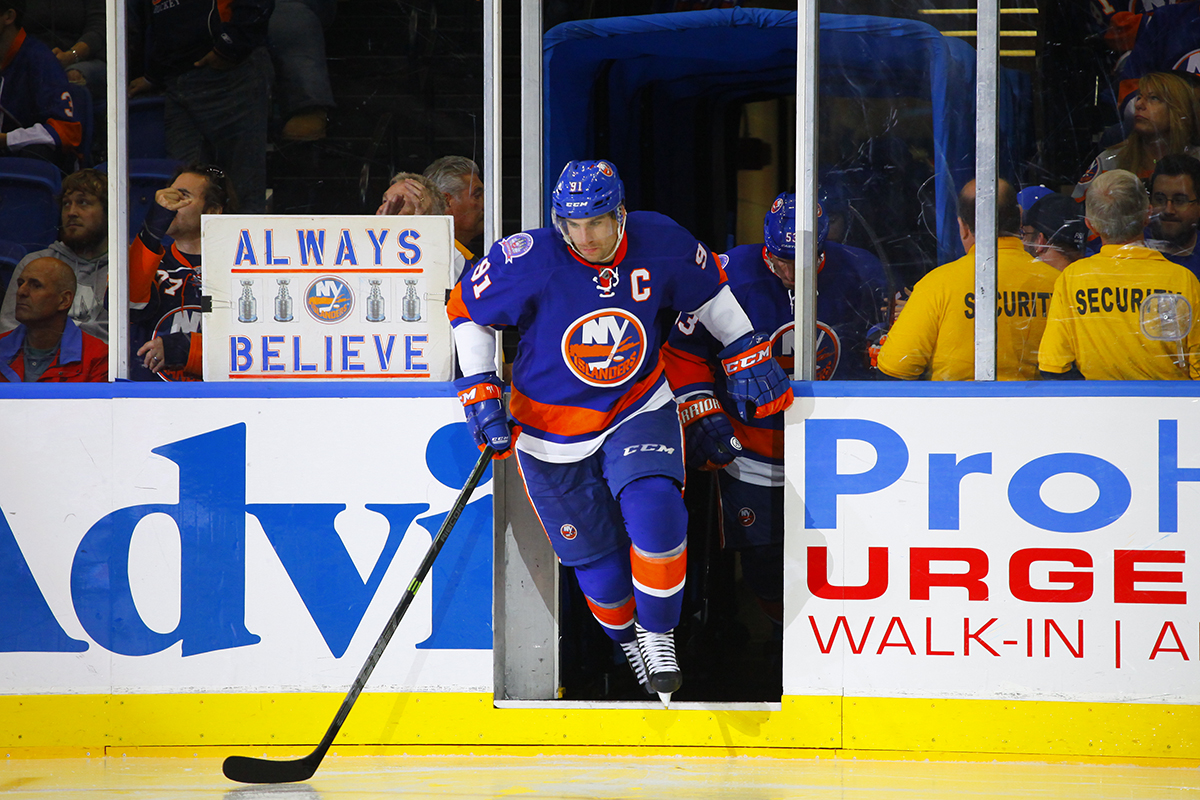 The New York Islanders lost the final regular season game at the Nassau Coliseum to the Columbus Blue Jackets 5-4 in a shootout. The game was a difficult loss for the home team who saw a 3-1 third-period lead slip away and with it, their chance for home ice advantage in the first round of the postseason. Instead, the Isles will start Round 1 of the Stanley Cup Playoffs in Washington against the Capitals.

The night was a celebration of 43 years of hockey on Long Island. Before the start of the game, the team played a video message from Hall of Fame general manager Bill Torrey while the wife and children of ailing Hall of Fame coach Al Arbour were on hand to drop the ceremonial first puck. Hall of Fame announcer Jiggs McDonald was in the building as well to MC the pre-game festivities.

Throughout the game, the crowd was enthusiastic at this sad occasion, but excited by what they were seeing on the ice.

The Islanders carried the play for most of the game, but some strong goaltending by Blue Jackets backup Curtis McElhinney and a few untimely bounces helped keep Columbus in the game. A shootout goal by Cam Atkinson in the fourth round of the skills competition gave the Blue Jackets the extra point and left the sellout crowd of 16,170 disappointed.

The game started off surprisingly chippy with plenty of hitting after the whistle and battles in front of both goals. Things settled down a bit after Eric Boulton dropped the gloves with Dalton Prout in the final minute of the first period with the game still scoreless.

An untimely hooking call against Casey Cizikas gave Columbus a power play in the final 22 seconds of the opening period and the Blue Jackets took full advantage with Atkinson scoring with 9.9 seconds remaining on a second rebound opportunity. That was the third straight game Isles’ goalie Jaroslav Halak had allowed a goal in the final 10 seconds of a period.

The Islanders tied the game on a goal by Kyle Okposo midway through the second stanza. Despite the fact that the Isles outshot the Blue Jackets 31-20 through 40 minutes, the game remained tied 1-1 after two periods.

The Islanders were the team with something to play for and they started the third period with a strong burst. First, Boulton tallied from just outside the crease just 2:52 into the second period. John Tavares scored just 55 seconds later and the Islanders had a seemingly comfortable 3-1 lead.

But the Blue Jackets got two quick goals from Brandon Dubinsky and Alexander Wennberg midway through the third period to tie the game at 3-3.

Both teams had chances to win in OT but the game went to a shootout where the Blue Jackets prevailed.

“We have to be better in the late stages of games,” Tavares admitted. “We had our opportunities but we let them slip.”

“We just have to stay focused, make the simple plays and be smart with the puck,” veteran defenseman Johnny Boychuk added. “We just had a couple of lapses and maybe a lucky goal there and they’re back in it but you can’t worry about that now. It’s time to stay focused on the next opponent.”

That next opponent is the Washington Capitals. The series will open later this coming week in Washington with the schedule to be announced by the league shortly.

Jamie Benn of Dallas had a four-point night and edged out Tavares for the Art Ross Trophy as the league’s leading point producer. Benn finished the season with 87 points, Tavares finished second with 86.

The Islanders finished the season with a record of 47-28-7, good for 101 points. That is the team’s highest point total since 1983-84 when they finished with 104. That was also the last time the Islanders reached the Stanley Cup Finals.

The Islanders wore replicas of their blue jerseys from their inaugural season of 1972-73 which featured orange numbers. After the game, the jerseys were given to fans who bid on them for charity.

The Islanders should know more about the status of defenseman Travis Hamonic on Sunday. Hamonic missed this game with an injury as did Matt Martin and Frans Nielsen. Colin McDonald and Matt Donovan were also scratched as was backup goalie Michal Neuvirth. Kevin Poulin was called up and served as Halak’s backup for this game.