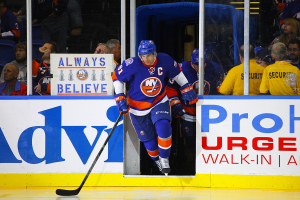 The New York Islanders played their worst game of the young season in a frustrating 5-2 loss to the Toronto Maple Leafs Tuesday night at the Nassau Coliseum.

Goals by Nick Leddy and John Tavares had the Islanders ahead 2-1 after the first period, but the team stopped skating and played shoddy defense in the second period and gave up four unanswered goals to the Maple Leafs. Phil Kessel scored twice to pace the Toronto attack.

“We were just easy to play against and we were soft on pucks,” admitted Isles’ captain John Tavares. “We stopped moving our feet. They have some guys who can score some goals and they just executed better than we did.”

The second period in particular almost looked like a flashback to the fire wagon hockey of the late 1980s. Both teams played poor defense and had a lot of open ice. Defensively, the Islanders left too many Toronto forwards open in the defensive zone.

“In the second, when we mismanaged the puck, things can break down in a hurry,” admitted Isles head coach Jack Capuano. “That’s how they got their surge.”

Starting goalie Jaroslav Halak didn’t let in any soft goals, but was unable to stop all of the quality scoring chances created by his team’s defensive lapses. He was replaced by backup Chad Johnson who did not allow a goal over the final 20 minutes.

The Islanders pressed in the third period, outshooting the Maple Leafs 17-5, but Toronto’s Jonathan Bernier turned aside all 17 shots to prevent the Islanders from getting back in the game.

The Islanders were very quiet in the locker room after this game. When defenseman Travis Hamonic was asked about what was lacking tonight, he responded, “Execution and effort. Those were the major differences in the first couple of games and it wasn’t there the last two games. We’ve got to stop this now.”

The Islanders penalty kill, which had struggled early in the season, was efficient tonight, holding the Maple Leafs off the board in all four attempts. The power play went 1-for-6 with Tavares’ tally coming with the extra attacker.

Perhaps the only other bright spot was that the team didn’t quit after that shaky second period, but by then, it was too little, too late and the Leafs were just trying not to make big mistakes to blow their lead.

“It’s a long season,” Tavares added. “Obviously we’re disappointed with our effort but tomorrow is a day to get better. We’ve got a couple of big games this week so we’ve got to be ready and bounce back.”

The Islanders next game will be Thursday night when they travel to Boston to take on the Bruins. Clearly, they will need a better effort if they hope to reverse the outcome of tonight’s game.

Defenseman Thomas Hickey left the game early in the third period after getting hit in the face with a skate. He required a substantial number of stitches and did not return to the game.

Cal Clutterbuck goaded the Leafs into taking two penalties that set up Islanders’ power plays. Clutterbuck was attacked first by Dion Phaneuf and later by Roman Polak but refused to respond. The Islanders cashed in on the power play after the Phaneuf penalty. Clutterbuck did receive a 10-minute misconduct penalty with less than a minute remaining in the game.

Calvin de Haan received a minor penalty for a check to the head midway through the third period.