Isles Down Bolts 5-2 With Help of Fourth Line 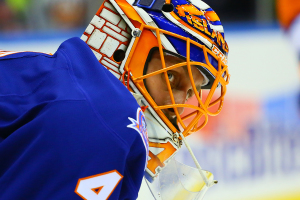 The New York Islanders depth proved to be the difference in their 5-2 win over the visiting Tampa Bay Lightning Tuesday night at the Nassau Coliseum. A shorthanded goal by Cal Clutterbuck and a clinching tally by Casey Cizikas helped the Isles got revenge for Saturday night’s Lightning win by the identical score.

The Islanders trailed 1-0 after an uneven an penalty-filled first period on a goal by Alex Killorn. But the Isles got a big momentum boost when Cal Clutterbuck took advantage of a turnover by Anton Stralman and put the puck past former Isles goalie Evgeni Nabokov to tie the game 1-1 just 39 seconds into the second period.

Goals by Mikhail Grabovski and Ryan Strome just 1:03 apart later in the second period put the Isles ahead 3-1. It was a lead they would never relinquish.

“We did a good job digging in and kind of ramming our game down their throats,” Clutterbuck said of his team’s second and third period effort. “We just made a conscious effort of getting on the same page and getting cohesive and getting some flow to the game.”

Head coach Jack Capuano appreciates what Clutterbuck brings to the table for his team. “He brings energy, and he’s a smart hockey player,”Capuano said. “He plays the game the right way. When you talk about the identity of a hockey club, one of the key ingredients a lot of people talk about is to be tough to play against. He makes us tough to play against.”

The Islanders’ power play clicked early in the third period to make the score 4-1. Brock Nelson tipped home a shot from the point by Lubomir Visnovsky.

After Ondrej Palat pulled the Lightning back to within two goals at the 2:14 mark of the third period, the Islanders put the icing on the cake when Cizikas netted his second goal of the season at 8:55 off a nice set up by Kyle Okposo.

“I kind of saw the guy on my left side out of the side of my eye and I just tried to put it back the opposite way where he was coming and Nabby bit,” Cizikas said.

The fourth-line center has played better since being a healthy scratch back on November 5th.  “We wanted him to just sit back and relax and watch a game from up top,” Capuano explained. “Sometimes, you’re pressing just a little bit too much. I think he knows his role, faceoffs, penalty kill, that 4th line guy that’s going to chip pucks and grind it out..For me, it’s just about staying the course. He’s got some skill, he works extremely hard and he does a lot of good things. Eventually that’s going to pay off for you.”

The Islanders showed resiliency and played a strong game against a team that came into the game with a 13-4-2 record. They did it by dictating the pace of the game in the final 40 minutes.

“We did all the smart things, all the right things that make our club successful,” Cizikas said. “That was getting the puck in deep, that was finishing our checks and that was getting second opportunities in front of the net. We were getting in Nabby’s eyes and that was the biggest difference in the game.”

With the win, the Islanders improved to 12-6-0 on the season and leaves them in second place in the Metropolitan Division.

The Islanders return to action Friday when they travel to Pittsburgh to take on the first-place Penguins.

Frans Nielsen and Kyle Okposo each had two assists while Brock Nelson scored once and added a helper.

Nabokov made 31 saves but allowed five goals in the game. During the third period, the crowd chanted, “Nabby, Nabby” to taunt the former Islanders goalie.

Johnny Boychuk left the game in the second period but returned in the third. He played only 15:46 in the game. Capuano was unsure of his status immediately after the game.