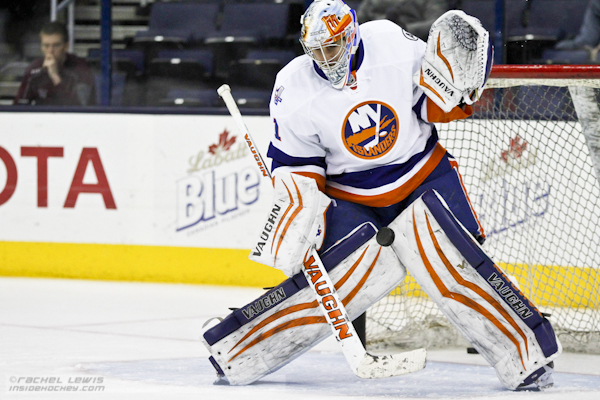 Thomas Greiss (NYI - 1) makes a save during warmups.

Islanders Fall to Habs Despite Strong Play by Greiss

Thomas Greiss played outstanding in goal for the Islanders but a late power play tally by Shea Weber gave the Montreal Canadiens a 3-2 win Wednesday night at the Barclays Center. Greiss made 26 saves, many of them spectacular to keep the Isles in a game in which they were often outplayed. John Tavares and Dennis Seidenberg scored for the home team. Former Islanders goalie Al Montoya made 26 saves to earn the victory for Montreal.

“We had a few turnovers here and there and that plays into a team like Montreal’s hands,” admitted defenseman Nick Leddy. “We had some good shifts tonight but we just didn’t play a full 60 minutes.”

The first period lacked flow and both teams played on the perimeter for most of the early going. The Isles outshot the Canadiens 8-5 but neither club had many quality scoring chances.

That changed in the second stanza when the Canadiens took control of the tempo and created several scoring chances early.

Paul Byron gave Montreal a 1-0 lead when he scored on a scramble in front of the Isles net. It was actually the second rebound on the play after Greiss made two quality saves. The puck deflected off Isles defenseman Travis Hamonic and past Greiss at 3:10.

The Canadiens had several quality chances to extend their lead, but Greiss kept them off the board, making 11 saves in the second period. The best was a stop of Tomas Plekanec in which Greiss showed excellent anticipation and got across his crease just in time to stop the puck.

The Islanders finally got a power play goal late in the second period. Andrew Ladd forced a turnover with an aggressive forecheck and John Tavares beat Montoya from the slot to even the score at 1-1 at 15:17. It was the Islanders first power play tally since their second game of the season against Washington.

“The second period was probably our worst period of the season,” Tavares admitted after the game. “We were very slow coming out of our own end, we weren’t executing and we had turnovers in the neutral zone and we just allowed them to use their transition and speed to get on us and we just weren’t able to generate our forecheck.”

The Canadiens broke back on top on Phillip Danault’s goal midway through the third period. Danault was able to find a rebound of a shot by Weber just outside the crease and put the puck past Greiss to give the visitors a 2-1 advantage.

The Islanders responded and evened the game on Seidenberg’s second goal of the season. The veteran blueliner took a hard shot from the point that found a way behind Montoya. Anders Lee set a screen in front of the net to distract the Montreal goalie and the game was tied 2-2 with just 5:44 remaining in regulation time.

Nick Leddy was called for the Islanders only penalty of the game with just 3:50 remaining in the game and the Canadiens took advantage of the opportunity. Weber scored the game-winner on the ensuing power play to give Montreal the win.

“He shot the puck top shelf,” Greiss said. “It was tough to get.”

Despite allowing the winning goal late, the Islanders realized Greiss gave the team a chance to win a game that wasn’t as close as the final score.

“I thought Greiss was excellent,” Isles coach Jack Capuano said. “He kept us in the game especially when our execution level wasn’t there in the first period and a half. Our passes weren’t there, puck support wasn’t there but at the end of the day we were still right in the game because of our goaltender.”

The Islanders return to action Thursday night when the visit Pittsburgh to take on the Penguins. It is the first road game for the team after five straight at the Barclays Center.

J.F. Berube served as Greiss backup. The Islanders scratched Jaroslav Halak and the injured Nikolay Kulemin. Mathew Barzal played in his second game with the team and was a minus-one in 9:20 of ice time.

The Isles gave away bow ties in honor of Hall of Fame general manager Bill Torrey who built the Isles dynasty in the 80s.