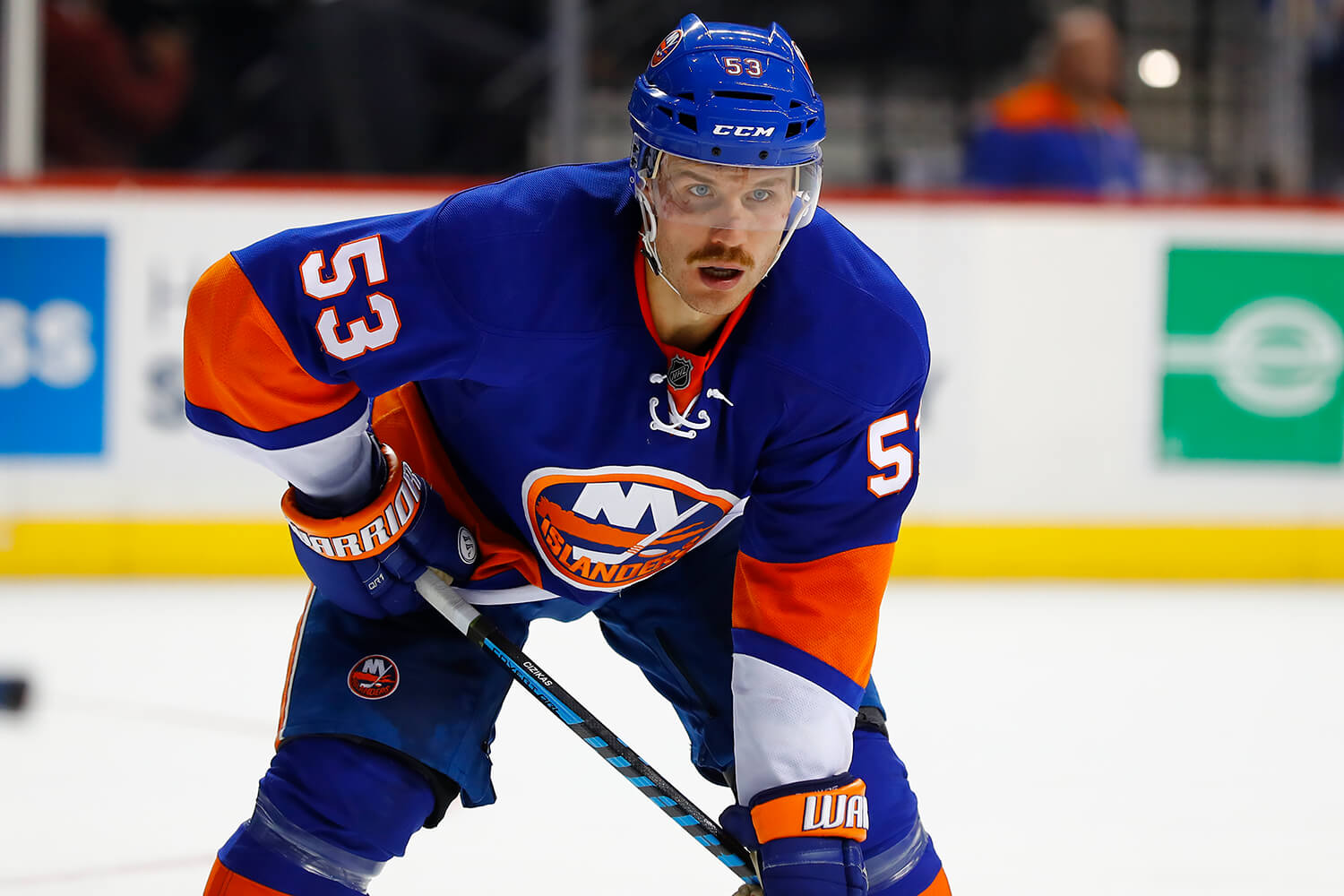 Matt Niskanen scored twice in the third period to break open a tie game and move the Washington Capitals to a 4-2 win over the New York Islanders at Barclays Center Tuesday. It was the second straight game the Islanders lost after entering the third period tied at 2-2. Brock Nelson and Nikolay Kulemin scored for the Islanders while Jaroslav Halak made 34 saves in a losing effort.

Unfortunately for the Islanders, it was a familiar story: poor penalty killing and untimely defensive breakdowns led to defeat in a competitive game against a quality opponent.

“We’re in a situation where we can’t afford to lose too many games in a row,” admitted veteran defenseman Dennis Seidenberg. “I think we played a decent game, but we just had a couple of little breakdowns that cost us the game at the end.”

The Islanders broke out to a 1-0 lead midway through the opening period when Cal Clutterbuck’s stretch pass sent Brock Nelson in alone. Nelson’s shot was deflected off the stick of a defenseman and fooled Capitals starter Braden Holtby.

The goal gave the Islanders momentum and they played well for the second half of the period despite being outshot 14-12. Halak had a strong period to keep the Isles ahead 1-0 after 20 minutes.

The Isles survived a scare early in the first period when center Casey Cizikas left the game after taking a skate blade to the hand. He headed to the locker room for repairs but was able to return to the game before the end of the opening stanza.

The second period had less pace and the Capitals quickly evened the score as Brett Connelly deflected home a pass by Lars Eller and deposited the puck behind Halak at 2:09.

The Washington power play struck for the first of its two goals on the night at 7:37 of the second period when Evgeny Kuznetsov was allowed to skate behind the net uncontested before making a centering pass that was deflected home by Justin Williams. The visiting team suddenly led 2-1.

The Islanders didn’t quit and tied the game 3:04 later. Nikolay Kulemin got in front of the Washington net and deflected home a hard shot from the point by Nick Leddy for his third goal of the year.

Washington created some quality chances late in the second period, but some quick glove saves by Halak kept things all even at 2-2 heading into the final period.

The Capitals broke the tie early in the third period when Niskanen scored on a rocket of a shot from the top of the circle at 1:34. The Islanders defense overloaded one side and three Isles players were stuck behind the goal line on the play. That left Niskanen plenty of room to skate in from the point and deliver a perfect shot that went in just below the crossbar.

“The third goal was structural,” coach Jack Capuano explained. “We had five guys on one side of the ice. That’s a mistake.”

The Islanders had some quality chances late in the third period to tie the game but Holtby made some great saves with the best coming against John Tavares and Cal Clutterbuck.

Then, Travis Hamonic took a foolish tripping penalty with 3:13 left in regulation. Niskanen scored the Caps second power play goal of the night with just 1:58 left in regulation to clinch the win for Washington.

After the game, Capuano expressed his frustration that some of his players are not playing smart hockey and that not all 20 players are making solid contributions to the team’s success. “I’m losing my patience with some of the guys. You have to hold guys accountable as players and as a team,” Capuano said. “I’m just talking about confidence and poise.”

According to Capuano, work ethic is not an issue. “Some guys are working hard but they aren’t working smart,” the coach added. “When you work, there’s got to be a method to how you go about your business…There are guys who drive the analytics the way you want to drive them and there are guys that drive them down. You’ve just got try to find a way to get some confidence and poise in those guys and try to get them to be successful.”

The Islanders look to get back on track Thursday night when they host the Chicago Blackhawks at the Barclays Center.

The Islanders scratched Alan Quine and J.F. Berube. Thomas Greiss served as the backup goalie. Prior to the game, the Isles return defenseman Scott Mayfield to Bridgeport of the AHL.

Shots at goal were 67-52 in favor of Washington.

The Isles blocked 19 shots led by Thomas Hickey with five.