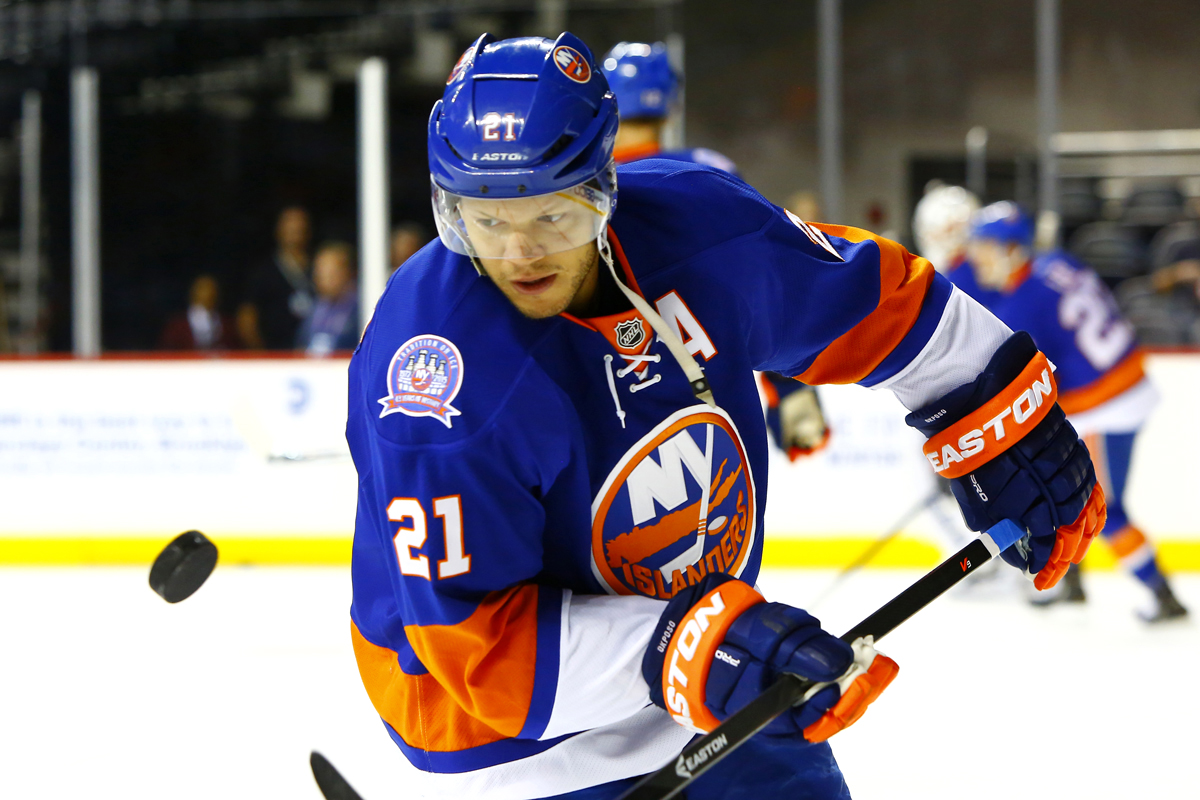 This summer will be a critical one for the New York Islanders. The franchise accomplished a lot in 2015-16 with back-to-back 100-point seasons for the first time since the dynasty years and their first playoff series win since 1993.

The Islanders have established themselves as a good hockey team, but they aren’t an elite team just yet. GM Garth Snow has taken a franchise that once was considered a laughingstock by many and developed them into a solid playoff team. But this summer will determine whether the Isles continue to develop into a consistent Stanley Cup contender or fall back to the pack and towards mediocrity.

Here is a look at the biggest issues facing the Islanders as they head into the offseason:

On July 1st, Scott Malkin and Jon Ledecky take over as majority owners and Charles Wang retains only a minority share of the franchise.

The biggest question facing the Islanders over the offseason is how will the new owners spend money. Under Wang, the Islanders were more often than not barely above the salary cap floor. The teams even went as far as to acquire the rights to former Bruins goalie Tim Thomas when they knew he would never play for the team just to make sure they met minimum league requirements.

Wang spent more money in recent years to help the team leave Nassau and enter Brooklyn with a competitive squad.

The big question going forward it what will Malkin and Ledecky’s approach to the team be? Will they be thrifty or free spending?

The more important question may be will they spend money wisely? In a league with a hard salary cap like the NHL, the biggest sin is not failing to spend but spending a lot of money and a lot of contract years on players who are not productive. Being stuck for several seasons with a player who is being paid $7 million a year but producing like he’s being paid half that is a recipe for disaster.

Islanders fans have to hope the team will take the $53 million annual payment from Barclays Center and spend it wisely to bring new talent in to help the club improve.

Obviously, the new owners’ approach will affect the team beyond just the coming season, but fans will get a first glimpse of how the franchise will be run this summer.
Potential Free Agents

The Islanders have several key players who will become unrestricted free agents on July 1st if they are not signed to a new contract before that date.

Kyle Okposo is the biggest name on the list. The 28-year-old St. Paul native scored 22 goals and 64 points this year which placed him third on the team in goals and second in points.

Okposo is also a leader in the locker room and very close with captain John Tavares. At the team’s final meeting on Tuesday, Tavares expressed hope that the team will be able to keep Okposo.

“We have a very close friendship,” Tavares said. “We roomed together my rookie season and we’ve become very close over the years, spending a lot of time together over the summer. He’s such a great person. He’s a guy I can really express anything about whether it’s about the game or just about life. He’s a tremendous hockey player, a great leader and really someone I respect.”

Unfortunately, it is unlikely Okposo will be back. He is expected be the second most coveted forward in free agency behind Steven Stamkos which means he will be offered top dollar by some team if he hits the open market.

At 28, Okposo is statistically past his prime and his offensive production is likely to decline after the first year or two of any long-term contract. This will be Okposo’s only chance at a big free agent deal and he will understandably want to get as much security for himself and his family as possible. It is unlikely the Islanders will bring him back at a substantial raise over his $4.5 million salary and probably unwise to pay the $6 million per season or more it would take to re-sign him.

Frans Nielsen is the player who has been with the Isles the longest. Because of his smart style of play and his versatility, there should be plenty of interest in “The Great Dane” if he hits the open market on July 1st.

Nielsen expressed hope that he may be back but an interest in exploring free agency if he isn’t. “I love being here and I would love to come back but we’ll see what happens,” Nielsen said. “We’ve come a long ways and it would be fun to see it through and see how far we can go.” He also added, “If I do go to July 1, it’s going to be fun to see what’s out there and what kind of teams have been noticing you over the years.”

Nielsen is also a quiet leader in the locker room and a player who can play on any of the top three lines at either his natural center position or on the wing. He is also a very good penalty killer and plays point on the power play.

There are plenty of teams that could use a Frans Nielsen in their lineup. He sounded like he preferred to stay with the Islanders and the Isles certainly are better off keeping Nielsen, but it just becomes a question of agreeing on a deal that makes both sides happy.

Matt Martin is the third major UFA the Islanders need to address the summer. The physical winger has been an integral part of the Isles celebrated fourth line and has been a big part of the community off the ice since his arrival in 2010.

This season, Martin scored a career high 10 goals and 19 points while continuing to hit anything that moves wearing an opposing jersey. Martin again led the league in hits this year, recording 365 in 80 games, 61 more than any other play in the league.

The Islanders fourth line has a unique chemistry and has been dubbed the best fourth line in hockey by many experts and commentators. Martin talked about how much being an Islander means to him and how he grew up here on Long Island, but he also realizes this is a business and he may be better off financially testing the free agent waters. The Islanders would love to bring Martin back, but it remains to be seen how much they’re willing to pay for a fourth-line player.

The Islanders carried three goalies this past season, a situation that worked out well when starter Jaroslav Halak missed substantial time due to injury including the last month of the season and all of the playoffs.

Thomas Greiss stepped in and enjoyed a career year setting personal bests for games played, wins and save percentage. Greiss also started in the playoffs and played well, leading the Isles to a win over the Panthers in the first round.

J.F. Berube only played seven games during the regular season and essentially lost a year of work because he didn’t play much in either the minors or with the Islanders. He showed some potential in practice and when he was called on in games.

It is unlikely the Isles return all three goalies next season. Garth Snow will likely try to trade one of the three during the offseason in an attempt to improve the team.

Halak has the highest salary and is the most established of the three netminders. He has two years left on his contract. Halak’s trade value may not be as high as it otherwise would be  because he is coming off the injuries that caused him to miss the end of the season.

Greiss’ trade value may never be higher than it is this summer. Greiss played well and demonstrated a calmness under pressure that his teammates seemed to appreciate. He makes less money than Halak which may make him more attractive to other teams. Still, the Islanders responded well to Greiss and he proved he is capable of being a quality NHL starter this season. He is also younger than Halak and earns less money.

Berube will turn 25 before the start of next season. He will be a restricted free agent but is expected to return to the Isles according to Newsday. Keeping Berube as a backup makes economic sense. It is likely Snow tests the market to determine which of the other two goalies he can get the best return for in a trade.

The announcement earlier this week that Travis Hamonic is rescinding his trade request was a big relief for the Islanders. Hamonic plays quality minutes and often faces opponents’ top forwards and does it all on a team-friendly contract. He adds stability and reliability to the Isles blue line and gives them the nucleus of a solid group of defensemen. Hamonic is also a locker room leader which becomes even more significant if alternate captains like Okposo and Nielsen sign elsewhere.

What the Isles Need to Add

Help up front remains the biggest need for the Islanders even if Nielsen and Okposo stay. Scoring depth was a problem for this team all season and the Isles need more production from their second and third lines next season if they want to improve and go further in the playoffs.

John Tavares is an elite player but he hasn’t had any elite offensive players around him for most of his career. To truly take advantage of Tavares while he’s in his prime, he needs a linemate who can be a consistent, 30-plus goal scorer that can help JT take his game to yet another level.

If either Nielsen or Okposo leave, the need for depth at forward becomes even greater. Yes, the Islanders believe that younger players like Ryan Strome, Anders Lee, Brock Nelson, Matthew Barzal, Michael Dal Colle and Joshua Ho-Sang have bright futures, but if the organization wants to continue to build on back-t0-back 100-point seasons and take advantage of the unique talent they have in Tavares, they need to add some players to the roster than can be difference makers now.

On defense, a big, physical defenseman would be a good addition to the team. Yes, there are quality defensive prospects like Ryan Puloch, Adam Pelech and Scott Mayfield in the organization, but a more experienced blueliner who can be dominant in the defensive zone would be a welcome addition.

In the end, this offseason will be a critical one for the Islanders on several levels. If the team adds the right mix of players and has new ownership that is willing to spend wisely on improving the franchise, it’s very possible Isles can continue to build on this year’s playoff series win and become true Stanley Cup contenders in the near future.