Is Canada’s Cup Drought Coming to an End?

Not since 1993 has a Canadian-based team won the Stanley Cup, the NHL’s most coveted prize. Calgary, Edmonton and Ottawa all tried from 2004 to 2006, going down in order to the American sunbelt of Tampa, Carolina and Anaheim. Vancouver was in position to finally put the drought behind the nation in 2011 before dropping two series leads en route to a seven-game defeat by Boston. Consider that the same evening in 1993 when Montreal was awarded the country’s most recent Cup was the same day Jurassic Park was released in select theaters. In short, forever ago.

Inevitably, the Cup will come to Canada one way or another. It always does. After all, 451 players represented the NHL last season, 180 more than Americans, the second highest population. Still, for as wild as those Sidney Crosby, Cole Harbor shindigs might look, it’s nothing compared to the celebration and mild relief felt by one of the seven Canadian fanbases. Behind some strong showings on opening night of the 2017-18 season, it sure seems like that drought is on its last legs.

In case you were wondering, the Toronto Maple Leafs still think goal scoring is fun. They potted five behind Steve Mason in two-plus periods of play before chasing the Winnipeg goalie. Connor Hellebuyck would surrender another two before the Leafs were done, cruising to a 7-2 victory on the road.

Patrick Marleau, who looked downright weird without any angry fish breaking hockey sticks on his chest, netted two goals in his Leafs debut, his first at 8:32 in the second period off a terrific pass from Auston Matthews, you remember him?

It was no four-goal game, but Matthews did score once and added two helpers skating on Toronto’s first line with Zach Hyman and William Nylander. Meanwhile the team’s second line of James vanRiemsdyk, Mitch Marner and Tyler Bozak combined for seven points. In all, six different Leafs found the back of the net and twelve tallied points.

Winnipeg fired 37 shots on Frederik Andersen, who stopped 35 in a strong start to his season. Still, the Jets weren’t all that crisp after controlling the first half of the opening period. Mason’s debut was shaky and Toronto capitalized. We should expect to see a potent offense again from the team that finished fifth in scoring a season ago. When Marleau and Nazem Kadri can’t crack your top-six and Connor Brown is hanging around on the fourth line you’re pretty deep team up front.

Mike Babcock, Lou Lamoriello and Brendan Shanahan could stand outside the CN Tower with cardboard “PUMP THE BRAKES” signs but it would be to no avail. The Toronto Maple Leafs are good and having fun. With young players getting paid on their second contracts and the Leafs roster consisting of lots of first-contract players, there’s a serious window for this team right now and Wednesday was just a preview of what should be an exciting season.

Connor McDavid picking up where he left off

While he’s in the final season of his entry-level contract, McDavid has lots of money on the horizon after signing an eight-year, $100 million extension in the offseason. So what might be hanging around in his Amazon cart? Probably some sort of large shelf or case, if he doesn’t have one already. He’s going to need the room after collecting hardware last season as the Hart, Art Ross and Ted Lindsay recipient. At 20 that’s just the beginning of a large collection he’s going to have.

McDavid cracked the 100-point mark last year and looked to be well on his way to repeating on Wednesday night, scoring all three goals in the Oilers 3-0 win versus the Flames. Perhaps the only disappointment for Connor was that he only finished with three, because he had about seven different scoring opportunities thanks to his tremendous skating and speed, the likes of which may not have another comparable in the league today.

He finished his night with a game-leading seven shots on goal as Edmonton fired 44 shots on Mike Smith, making his debut in net after being acquired by Calgary in the offseason. The debut wasn’t even all that bad for the netminder. Allowing a goal to McDavid will become part of the norm in hockey culture and with Leon Draisaitl there too he won’t have to do it all on his own. Oscar Klefbom and Adam Larsson logged over 20 minutes and should be a reliable duo on the backend, though the Penguins minus Letang in the Final really makes you wonder what kind of caliber you really need in the Final.

Like the Leafs, the Oilers can skate and pretty fast at that which is vital in the new NHL. We know it’s early and the Pacific has been a difficult division, but Edmonton is part of any Cup conversation and 97 is alone is a reason to believe it.

Flames bring in a legend 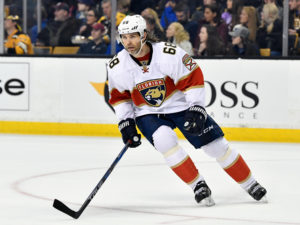 While the Flames fell 3-0 on the road in opening night, they got a good effort from Smith. They also can boast one of the best defenses in the league headlined by T.J. Brodie, Mark Giordano, Dougie Hamilton and Travis Hamonic. That plus a healthy Johnny Gaudreau offers hope to a Flames team coming off a first round exit by the Ducks last April.

While the Flames are a relatively young team, you can understand if their average age rocketed up on Wednesday afternoon when they announced the signing of 45-year-old winger, Jaromir Jagr. Inking a one-year, $1 million contract, Jagr will play in his 25th NHL season–a career older than some of his teammates. Still, you’d be hard pressed to find the kind his kind of productivity in veterans six or seven years his junior. Or one that’s missed just seven games in his last four seasons.

Calgary projects to be a bubble team, but adding the presence of a player like Jagr won’t hurt. He can still play, following a 46-point campaign with Florida last season. He’s long hinted at wanting to play for a Canadian city too. That could provide added motivation in what we assume is the beginning of a farewell tour. It would be wildly entertaining to see the Flames win it all with him and deciding to hand him the Cup first as his teammates have either forgotten or weren’t alive when he won back-to-back Cup’s with Pittsburgh some 16 years ago. Yeah, that sounds hysterical.