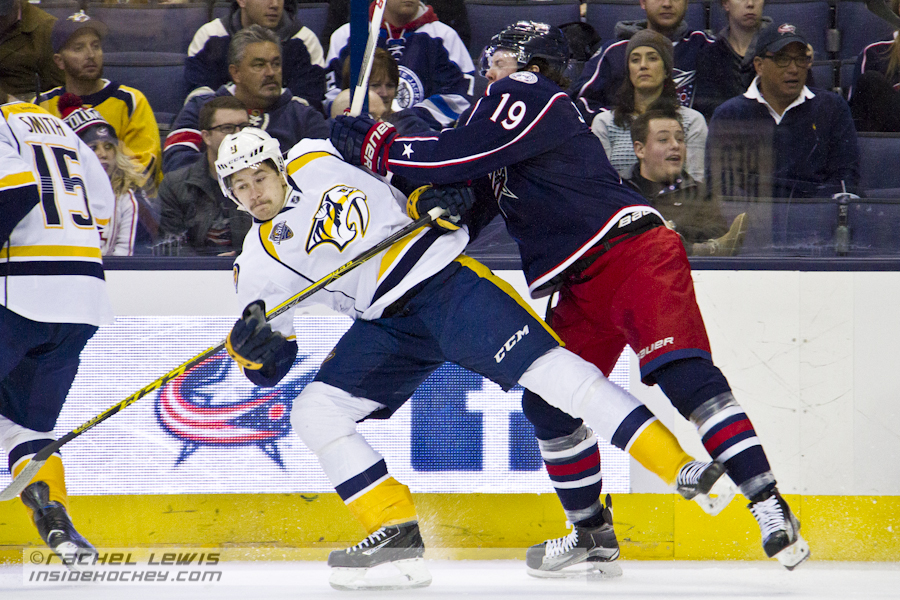 Is Ryan Johansen ‘In Play’?

The Columbus Blue Jackets, although sporting a 9-7-0 record since John Tortorella replaced Todd Richards after a 0-7-0 start, are nearing a precarious point in their season.  Although the Blue Jackets have begun to gain traction under Tortorella, at 9-14-0 after the Thanksgiving holiday and in last place in the Metropolitan Division and the National Hockey League’s (NHL’s) Eastern Conference, need to make a significant run to get back in the Stanley Cup playoff picture, and fast.

TSN’s (Canada’s equivalent to the USA’s ESPN) Darren Dreger is reporting that Blue Jackets General Manager (GM) Jarmo Kekalainen is taking calls for trade offers on its rising star center Ryan Johansen.  Although Dreger further reported that Johansen is “softly in play” in the NHL trade market, Kekalainen and the Blue Jackets were “listening to trade offers” and Kekalainen was “not dismissing the interest”.

And although Johansen is on pace for another 60+ point season, something considered rarified air for this 15-year old franchise and although it would appear unlikely that the Blue Jackets would trade away a rising talent, there are factors in play that would make any reasoned observer believe that, given the right offer, it could become reality.

First of all, Johansen staged a holdout last season before agreeing on a 3-year, $12 million deal, after Johansen and his agent, Kurt Overhardt, declined long-term offers that far exceeded what the normal collective bargaining agreement (CBA) organization normally offers a player coming out of his entry-level contract.  Although both parties to the negotiation deny any ill will or lingering grudges, the final year amount of $6 million means that the Blue Jackets must tender a qualifying offer worth that much when Johansen is eligible for Restricted Free Agent (RFA), with salary arbitration rights, before July, 2017.

Also, since Tortorella’s arrival, some tensions have arisen between the upstart star center and his historically (at times) combative coach.  Tortorella, after a loss early in his tenure with the Blue Jackets to the Minnesota Wild, mentioned that Johansen was out of shape and was benched for the final 6:10 of the contest.  Shortly thereafter, didn’t play for a pair of games after Johansen was dealing with an undisclosed illness.

And although Johansen has dismissed any tension between the two, during Sunday’s 5-3 loss to the San Jose Sharks, Tortorella limited Johansen’s Time-On-Ice (TOI) to a mere 13:52 – his lowest total of the season and TOI levels normally associated with the lower two forward lines, TOI not usually incurred for someone considered a ‘franchise center’.

Add to that is Kekalainen’s quest for a top-pairing defenseman, something he has been in pursuit of since mid-October.  There have been reports since that time that claimed Kekalainen was shopping wingers Cam Atkinson and prospect Kerby Rychel in exchange for a defenseman, a position whose talent dearth has hampered the Blue Jackets’ fortunes as well as its blueprint for the future as a Stanley Cup contending team.

Although Atkinson and Rychel might not garner a top-two blueliner (defenseman), someone of Johansen’s upside and ability could fetch such a level of return, quite possibly an additional high draft pick or top prospect.

Although no rumors have surfaced to that effect, perhaps a team like the Nashville Predators, who have both recently and historically struggled for scoring and could certainly use a young centerman like Johansen, could offer in return their young defenseman, Seth Jones who, like Johansen, was the 4th overall pick in their respective (Johansen in 2010 and Jones in 2013) NHL Entry Drafts.

While the rumors remain “soft” as to an impending trade, given all of the factors, particularly should the Blue Jackets struggle to make a serious move on the Eastern Conference playoff contenders by New Year’s Day, a trade for Johansen could be in the offing.