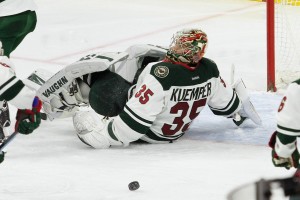 It would seem after a few injury plagued seasons for Minnesota Wild goaltender Niklas Backstrom, he is now healthy and ready to contend for the number one job in Minnesota once again. The task will be tough to take the net from Darcy Kuemper right now, but in Kuemper’s last five games played, he is 2-3-0 allowing 16 goals against making his goals against just over three in this stretch.

In nine games played for the Helsinki, Finland native, he is 3-2-1 with a 1.97 goals against average and a .917 save percentage bringing him back to his outstanding numbers when he broke out in the NHL. Three of Backstrom’s last five appearances have been in relief of Kuemper, coming in to clean up messy situations.

Backstrom seems to have returned to his Vezina Trophy runner-up season form and wants his job back. He is making a very good case to earn it back with allowing just 15 goals this season to Kuemper’s 43, although it is in just under half the amount of time played to Kuemper. However, if you do crunch the numbers and assume that they both have played the same amount of time (Kuemper’s 1048 minutes played), Nik Backstrom is on pace to have allowed nine fewer goals then Kuemper to this point.

Is it time for a changing in the guard once again for Minnesota in goal? I don’t think it is the right thing to do right now. Kuemper needs to grow as the franchise’s number one goaltender, but Backstrom should be getting one start to three of Kuemper’s right now. He has earned it.