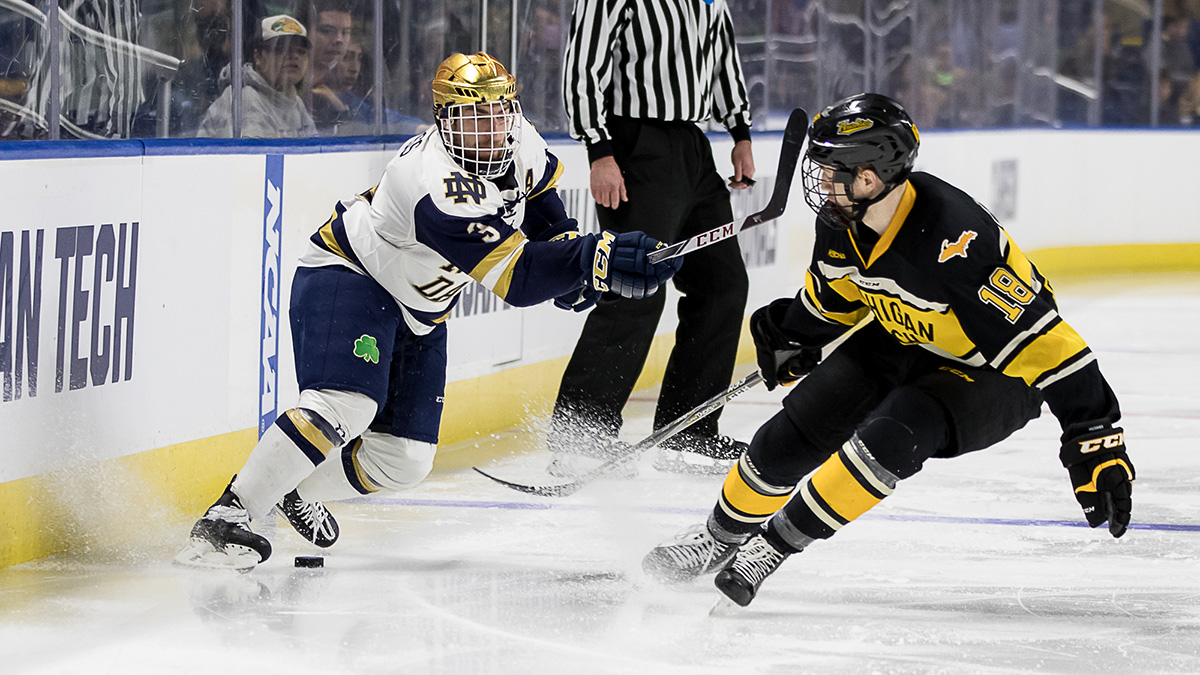 Bridgeport, CT- The NCAA Hockey Tournament opened in style at the Webster Bank Arena, in Bridgeport on Friday night. Top seeded Notre Dame looked to continue their excellent season against WCHA Tournament Champion Michigan Tech. The Irish and Huskies combined for a classic opening game and demonstrated the beauty and pain of playoff hockey.

The first period saw the teams feel each other out. Notre Dame only won the shot totals 7-4, and did not get a shot on Tech goalie Patrick Munson for the final seven minutes of the period. The Huskies, meanwhile, barely tested Notre Dame’s Cale Morris, and the game entered the first intermission scoreless.

The Huskies broke the ice early in the second period. Joel L’Esperance drove up the center of the ice and beat Morris to give Tech a 1-0 lead 1:13 into the second period. It only took Notre Dame 1:47 to answer. A puck bounced off the end boards, and Dylan Malmquist backhanded a loose puck on Munson’s doorstep into the net to tie the game. The attack continued 2:24 later, when Tech had problems clearing the puck. After a failed exit attempt, Joe Wegworth landed a shot to put Notre Dame ahead 2-1. Tech took control of the remainder of the frame, outshooting the Irish 17-6 for the frame. Cale Morris was outstanding, though, and Notre Dame carried a 2-1 lead into the second intermission.

The third period was frantic and fraught with tension. Tech again had the early push. Jake Lucchini drove up the left boards and cut through two Irish defenders for a shot on net. Morris saved it, but Gavin Gould cleaned up the mess to tie the game 56 seconds into the third. A few minutes later, Mitch Reinke took one of only two Tech penalties and three total minors in the game. The cross checking penalty gave Notre Dame a power play and momentum. Halfway through the power play, Jordan Gross blasted a shot inside the left post from the point and gave Notre Dame a 3-2 lead.

The Irish then held on for dear life as Tech won the shot battle 14-10. Morris held strong for most of the stanza. However, in the final minutes, the Huskies turned up the intensity and tied the game. With Munson pulled and an extra attacker on, Jake Jackson drove up the left boards and backhanded a shot over Morris’s shoulder with 1:06 left in the game. Neither team got another chance late in the frame, so the first NCAA Tournament game of the year entered overtime.

In the extra session, Notre Dame completely controlled the pace and shot totals. The Irish outshot the Huskies 9-4 in the period. Munson stood on his head and kept Tech alive. Late in the frame, the game came to an incredible climax. The Huskies possessed the puck in the offensive zone for upwards of 45 seconds. They fired a shot on Morris, but to no avail. They brought the puck back to the point for Mark Auk. Unfortunately, his stick broke and the Irish sprinted the other way. After a shot, a save, and a cycle, Jordan Gross got the puck back at the point. The senior from Maple Grove, MN, blasted a puck by Munson and punch Notre Dame’s ticket to the NCAA Regional Final for the second year in a row.

The Huskies were crestfallen, but proud of their efforts after the game. Head Coach Joe Shawhan summed up the teams thoughts in the postgame pres conference. “This was a fun game to be a part of. I told out group after the ame that there are cliches of trying your best and all that, but this group plays like we want them to. You try to be men of faith and put that into action. You do your best and that’s what this group did. We improved throughout the year. I love our team.”

Michigan Tech concludes the season with a 22-17-5 record. This iteration of the Huskies continued the program’s renaissance, winning the team’s second consecutive WCHA Tournament Championship and third in four seasons. They took one of the best teams in the nation to the limit, and gave all they had to try and win.

Notre Dame improves their record to 26-9-2. They were pleased with the win, but not over the moon. Head Coach Jeff Jackson explained after the game. “We are pleased to have the opportunity to continue our season. It was a tough, hard fought game. A lot of credit goes to Michigan Tech. The game could have gone either way.” When asked about his team’s resilience, Jackson summed up his thoughts humorously and simply. “It’s been like this all season. I tell them after games they have to quit doing this because I’m 62 and I don’t know how much more my heart can handle. Hopefully we can come back and be more assertive tomorrow.

The Fighting Irish take on the Providence College Friars at the Webster Bank Arena on Saturday night. Puck drops at 6 pm for a spot in the Frozen Four.