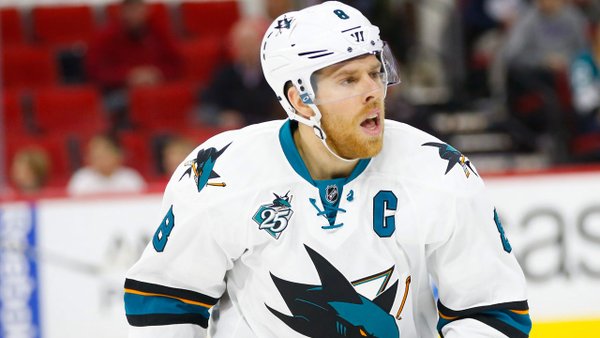 As most Bay Area hockey fans know, five Sharks will be competing for the World Cup in Hockey this fall. Those players include Joe Pavelski, Joonas Donskoi, Marc-Edouard Vlasic, Roman Polak and Tomas Hertl.

As expected, Pavelski was named to Team USA’s roster. Pavelski is seventh in the NHL in scoring this season with 61 points and third among all American players, behind just Patrick Kane (85) and Johnny Gaudreau (63). He was one of nine forwards named to the American roster, joining Kane, Justin Abdelkader, Ryan Kesler, T.J. Oshie, Max Pacioretty, Zach Parise, Derek Stepan and Blake Wheeler.

Pavelski is a veteran of two Olympic Games and one World Championship. He and Team USA won silver at the 2010 Olympics in Vancouver and finished fourth in 2014 in Sochi, Russia. Pavelski also played in the 2009 World Championships, where Team USA took fourth.

Among active American players, Pavelski ranks fourth with 257 goals in 705 NHL games. He has 29 goals this season.

“It’s fun to see their faces on the other side and compete against them, take a faceoff against them and those type of things,” Pavelski told the San Jose Mercury News. “At the end of the day, you’re just trying to win and accomplish everything you can for your team and hopefully end up on top.”

Vlasic was named to Team Canada. Donskoi was selected to Team Finland. Hertl and Polak were chosen to represent the Czech Republic.

Each of the eight teams that will play in the World Cup had to select at least 16 players by Wednesday. The remainder of the 23-man rosters will be named by June 1.

Vlasic is the Sharks’ most reliable defenseman. He’s also having the best offensive season of his career with 37 points in 59 games.

In an interview with the San Jose Mercury News, Vlasic said, “Every time you can represent your country, it’s a huge honor and to do it on the biggest stages is even better.”

In his first full season in North America, Donskoi has 27 points in 57 games, tying for 12th among all NHL rookies.

Hertl is in his third year with the Sharks, but is having his greatest season as a professional with 33 points in 61 games. He scored his 15th goal of the season on Sunday in Vancouver, matching his career-high from 2013-14.

Let’s rewind a minute to the 2014 Olympics when the Americans went 3-0 in the preliminary round and won their quarterfinal game 5-2 over the Czech Republic. But Team USA lost 1-0 in the semifinals to Canada, and lost 5-0 to Finland in the Bronze Medal game.

While Team USA has a talented roster, on paper they aren’t as deep as Team Canada or Team Russia.

The World Cup is scheduled for Sept. 17-Oct. 1., with all games at the Air Canada Centre.