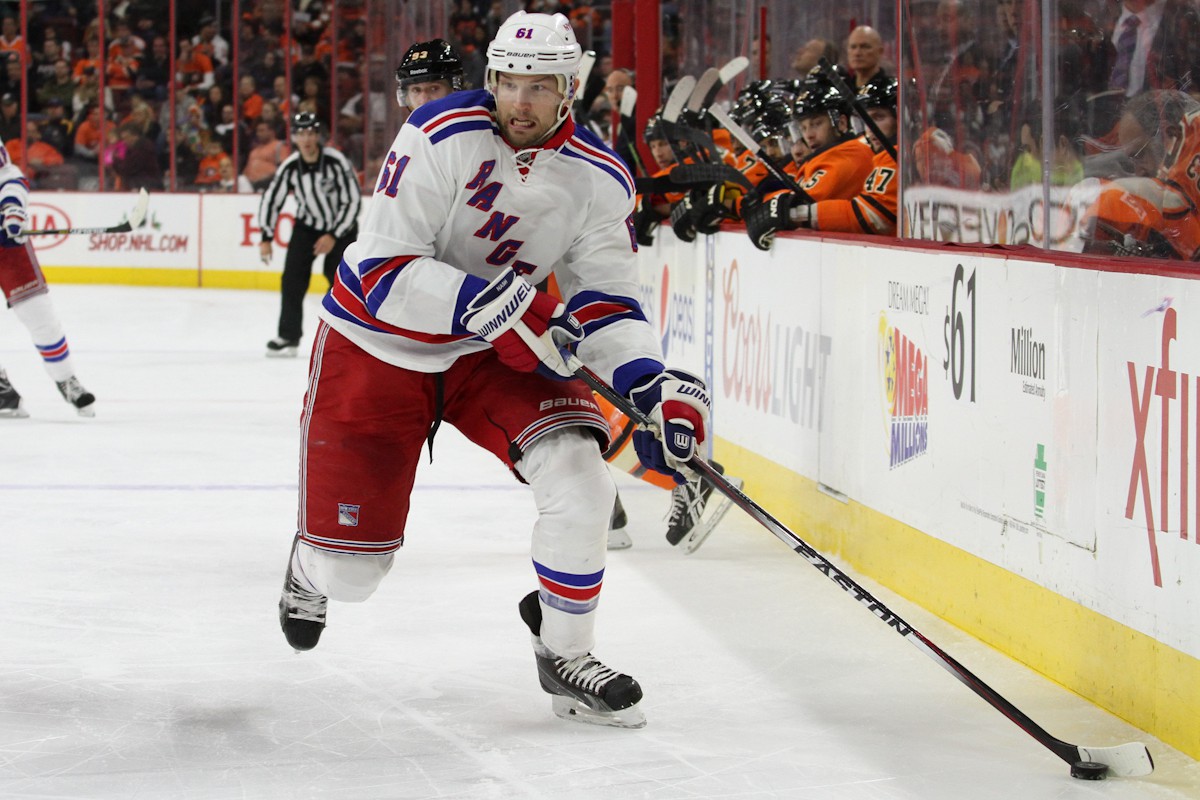 NEW YORK – The New York Rangers kicked off their 90th season in grand fashion by defeating the New York Islanders 5-3. The Rangers have now posted an 8-3-1 record in their last 12 season-opening games, dating back to the 2005-06 season. They also extend their opening day winning streak to three straight.

Before the puck was dropped, the Rangers commemorated their 90 years of history in a pregame ceremony that included some of the Rangers from the 70s, 80s and 90s. Rod Gilbert, Eddie Giacomin, Ron Greschner, Ron Dugauy, Mark Messier, Mike Richter, Petr Prucha and even Brad Richards and Marty St. Louis were among those on hand for the blue carpet affair.

The Blueshirts opened up their regular season schedule at home for the first time since the 2007-08 season and played their first game of a season against the Islanders for the second time in franchise history (1997-98; 2-2 tie on Oct. 3, 1997). Seven players made their Rangers debut in tonight’s contest (Adam Clendening, Nick Holden, Jimmy Vesey, Michael Grabner, Brandon Pirri, Pavel Buchnevich, and Mika Zibanejad). In addition, Buchnevich and Vesey made their NHL debuts in tonight’s game.

Michael Grabner, the former Islander, scored the first goal of the 2016-17 season for the Rangers on a rebound thrown to the net by Brandon Pirri at 13:41 of period number one. The Rangers fourth line utilized its speed and skill on was able to cash in early and create chances.

The second strike for the Blueshirts came at 17:41 of period two when Mats Zuccarello who, got the puck on a turnover and went to make a pass in front only to be redirected by an Islanders skate and in behind Jaroslav Halak for the 2-0 lead.

In what was a very good first forty minutes for the Rangers, things turned quickly to start the third period as the Islanders scored two goals within the first five minutes; one that came just 47 seconds in by Nick Leddy and the follow up by Cal Clutterbuck. The Rangers however, were able to regroup after the “mistakes” as head coach Alain Vigneault called them in the postgame and were able to retake the lead when Chris Kreider cashed in on a breakaway.

For the Rangers, a key component that was going to be looked on for a successful season was the special teams and the power play looked as good as ever. Pirri, who found himself on the top unit, put the puck in the net to secure the two goal lead. With three minutes remaining Islanders head coach decided to pull Halak but J.T. Miller added the empty net goal. Brock Nelson would bring it back to within two but the Islanders came up short.

Lundqvist, made 25 saves and earned a win in tonight’s contest. Lundqvist made his 11th consecutive start in a Rangers’ season-opening game in tonight’s contest (dating back to 2006-07), becoming the second goaltender in franchise history to start in at least 11 season-opening games, as well as 11 consecutive season-opening games (Ed Giacomin – 11 from 1965-66 – 1975-76). He also became the second goaltender in franchise history to appear in a regular season game in at least 12 different seasons (Mike Richter – 14 from 1989-90 – 2002-03). Lundqvist earned his 375th career NHL win in tonight’s game, passing John Vanbiesbrouck for sole possession of 14th place on the NHL’s all-time wins list.

After the win, Vigneault spoke about the overall thoughts on the 90 year history, “For our fans, as coaches and players, that introduction there to see all of the alumni come out as Original Six with 90 years of history – that was great for us and I’m sure it was great for our fans.”

He went on to talk about Kreider who seems poised for a breakout season by saying, “Everybody who knows Kreids, conditioning is never an issue. I think he just came in here with the right attitude and he’s playing to his strengths. Obviously, that’s being a power forward, using his speed when he has the puck and using his speed on the forecheck to create a turnover”.

Although it wasn’t pretty in the third period, “The King” gave his take by saying, “Of course you are concerned,” Lundqvist said after the game. “I think that stretch after [it became] 2-2 was obviously the key in the game, not to get hurt again and to have a few chances and then we turn it around with a great play. Our special teams also played a big part tonight. Our penalty kill was outstanding. Our power play stepped up and scored a huge goal for us. There were a lot of different things to be happy with for the first game.”

Pirri, the recipient of the Broadway Hat talked about competing for time in the lineup and went on by saying, “Internal competition is a good thing because it drives us each to get better every day. We are all pulling for each other. At the end of the day it doesn’t matter who is playing the minutes as long as the team is winning.”

The Rangers, went winless against the Islanders last season (0-3-1) so this win has gotten the monkey off their back. Lundqvist has finally beat Halak and the Rangers played the type of game they had hoped for that included speed and pressure. Now its off to St. Louis as they will take on the Blues Saturday night.