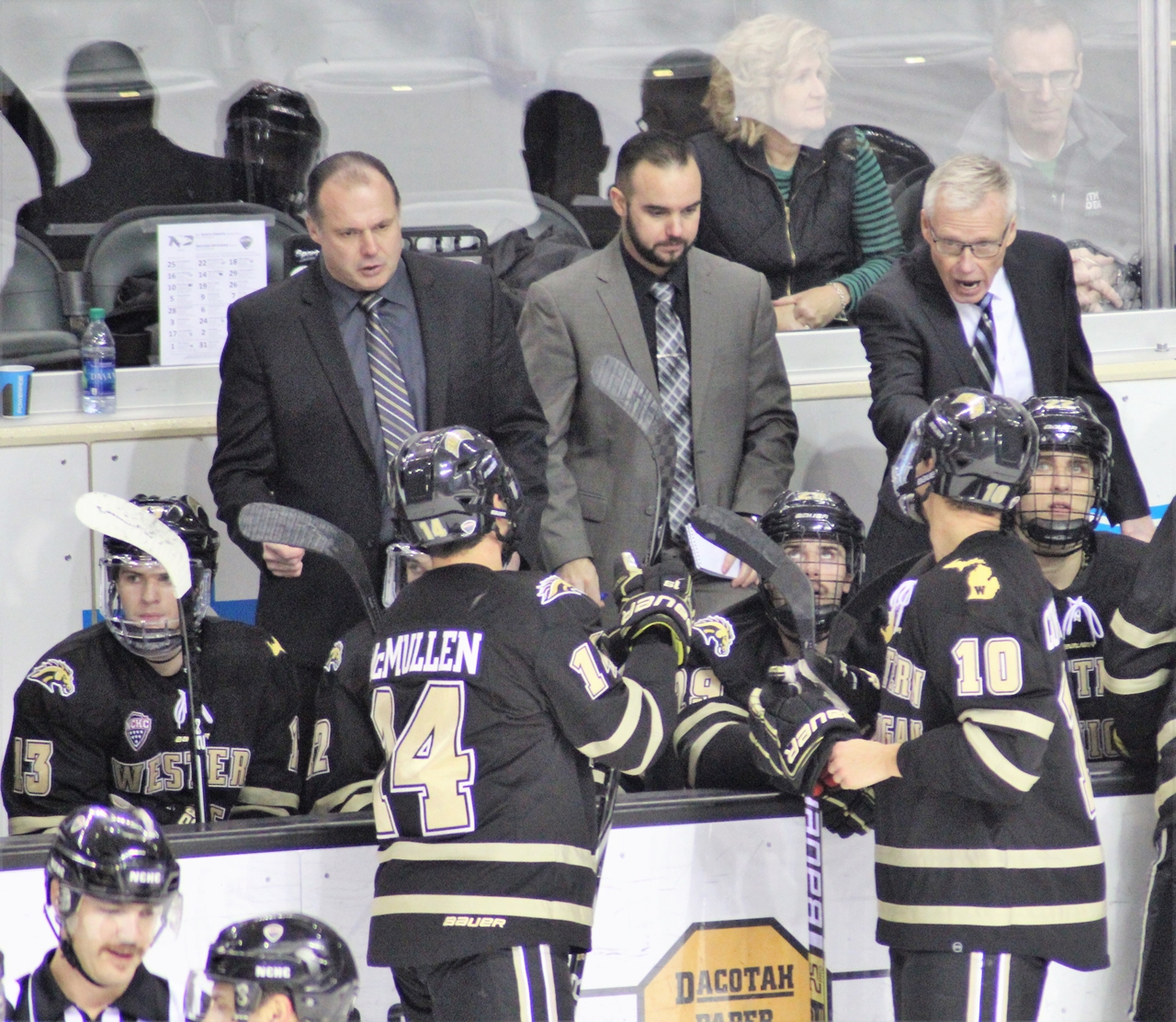 Western Michigan during a time out of a NCHC game. (Photo Credit: Eric J. Burton)

Las Vegas, NV- The National Hockey League came to Sin City in 2017 and roared to a spectacular opening act. College hockey came the year after and offered another reminder that hockey works in Las Vegas. This year, the Ice Vegas Invitational plays it’s second season and draws a curious collection of stories, cultures, and question marks to the desert. Let’s preview the 2018 Ice Vegas Invitational!

There are perhaps no two different programs, in terms of situation and direction, more different than these two. Air Force has the benefit of long-term stability behind the bench and recent success in their conference and the NCAA Tournament. St. Lawrence, meanwhile, is still reeling from a disastrous transition out of Greg Carvel’s tenure as head coach and a poor run in the ECAC and no NCAA Tournament appearances for almost a decade. Despite the success disparity this season and the last few, St. Lawrence does pose an interesting challenge to the Falcons.

Air Force’s calling card for many years has been its defensive integrity. This year isn’t much different, but it is different. Billy Christopolous has been superb in net again and the Falcons are Atlantic Hockey’s best defensive team, ranking in the top 20 for goals allowed. The problem? The offense can be anemic. Air Force only has three double-digit scorers, Evan Feno, Matt Koch, and Evan Giesler. Kyle Haak, the top Cadet in the Academy’s Senior class, is close at nine. However, the Falcons as a squad is only 42nd nationally and were shutout twice against American International College. They’ve got the conditioning and grit to play a physical game, but they haven’t shown the offensive prowess needed to scare opponents this season. Worth noting, Air Force is the geographically closest school to T-Mobile Arena and also has a built-in fan base at nearby Nellis Air Force Base. Fan support can make a considerable impact on a neutral ice surface. Also, Air Force travels well and they’re the closest team to Vegas by miles.

St. Lawrence has notched some notable upset wins this year. Topping the list is an overtime win at Mariucci Arena against the Minnesota Golden Gophers and a 4-2 win over archrival Clarkson in December. The trouble is that the Larrys are in the midst of another disastrous season, sitting near the bottom of many statistical categories. Their leading scorer, Carson Gicewicz, only has eight points and their next highest point producer has only six. As a team, the Saints rank in the bottom six for both goals scored and goals allowed. Still, 2019 has the potential to serve as a make it or break it year. Mark Morris is in the prove it year of a five-year deal, and he likely would not be rehired without some improved success. This tournament, while not a trip to Lake Placid or the NCAA’s, would go a long way to putting the Larry’s back on track.

Ultimately, I think Christopolous will be too much in the Air Force net and the Falcons can play a physical enough game to stymie St. Lawrence’s upset hopes.

Mike Cavanaugh and Andy Murray both have decorated careers from before their current jobs. Since arriving at UConn and Western Michigan respectively, the two have brought respectability and high tier talent to their programs. Tage Thompson and Maxim Letunov both spent time in Storrs while Kalamazoo has yielded Luke Witkowski and Danny DeKeyser. All are enjoying promising careers in the professional ranks and all paved the way for their college teams to enjoy some success. Western did regress last season, missing the Big Dance after a 2017 NCAA Tournament appearance. However, they seem to have returned to postseason form this year, sitting in 2nd place in the NCHC. UConn, meanwhile, has struggled mightily with an enormous senior class departing and Letunov departing to the NHL with them. Still, this early matchup should be a fun contest.

UConn is missing one of their most important pieces. Jachym Kondelik, the Huskies’ leading assists collector and second-best scorer, is playing for the Czech Republic’s World Junior team and is unavailable for UConn’s second massive trip this season (They were in Belfast for the Friendship Four). Still, Adam Huska is a game stealing goaltender who robbed in-state rival Yale on New Year’s Eve with 39 saves on 40 shots. He’s ranked in the top 35 for save percentage and will be the focal point of UConn’s effort. Karl El-Mir and Alexander Payusov are offensive threats, but the Huskies are only 47th in goals scored.

Western Michigan offers a pair of ten goal scorers in Hugh McGing and Josh Passolt. These two join Colt Conrad atop the nation’s eighth-leading offense. They’re only a middling defensive team with the 36th best goals against average. Trevor Gorsuch is a top 15 goaltender in save percentage at a .927. He backs up a weaker blue line and has looked very good against the nation’s best competition in the NCHC. Still, the Broncos need a better performance out of their blue line to crack Huska.

I think Western will have enough offense and Gorsuch will play well enough to get a Bronco win in the first game between these teams. Finally, in a hypothetical Tournament Title game between Air Force and Western Michigan, a rematch of a 2017 NCAA Regional game, I think Air Force’s physicality would match Bronco speed, resulting in a Falcon win.