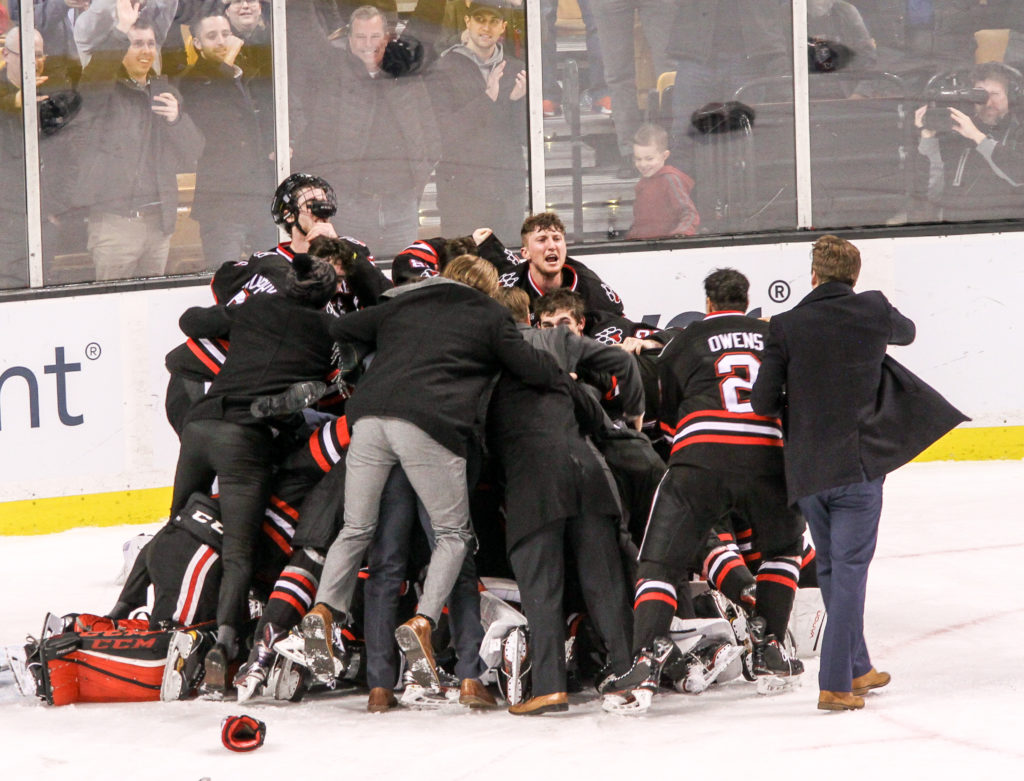 Boston, MA- Of the four Beanpot schools, Northeastern University has seen the least success. Since 1988, the Huskies have made three NCAA tournament appearances, no Frozen Four trips, and not won a Beanpot. Every other team has made multiple trips to the Frozen Four and won a National Championship. On Monday night, Northeastern had a chance to end 30 years of futility in Boston’s College Hockey Tournament. They seized their chance against the Boston University Terriers and opened trophy hunting season in style.

It did not appear that would be the case early. In the first few minutes, Drew Melanson apparently put BU ahead with a puck mashed in on the doorstep. The officials reviewed the goal and reversed the call, ruling that Melanson interfered with Northeastern goalie Cayden Primeau. Even with the disallowed goal, BU potted the opener near the halfway point of the frame when Logan Cockerill dropped a puck infront of Primeau and the puck bounced off the Voorhees, NJ, native’s stick.

Then the Terriers committed some penalties and everything changed. Nolan Stevens knifed his way through half of the Terrier defense and tied the game after Nikolas Olsson was called for a tripping penalty. The Huskies followed with perfect passing to give Adam Gaudette a one-timer for a 2-1 lead following a Chase Phelps interference penalty. With a surging power play leading the way, Northeastern led at the break.

The Terriers dominated the second period shot total, outpacing the Huskies 14-6. Primeau stopped every shot and the Huskies converted on their opportunities. Late in the frame, Trevor Owens beat Oettinger from the right circle. Then with 34 seconds left in the period, Brady Tkachuk committed a cross-checking penalty. Adam Gaudette fired a puck on Oettinger from the left goal line and the puck bounced in for a 4-1 NU lead just before the second period.

The Terriers again pressured the net in the third period, outshooting the Huskies 16-7. Most of the frame saw no goals and celebratory cheers from Northeastern’s student section. With 2:40 left, BU put fear back into Northeastern, as Shane Bowers mashed a puck by Primeau to put BU in striking distance. The Terriers kept firing on Primeau, trying to force overtime and break Northeastern’s hearts again. Tonight, though, belonged to the Huskies.

With 31 seconds left, Northeastern cleared a puck out of danger. Gaudette won the race to the puck to stop Chad Krys from getting an icing call. He controlled the puck, deposited it into the empty net, and sent the Dog House into a frenzied celebration. NU closed out the final seconds and stormed the ice in celebration of a 5-2 win and their fifth Beanpot Title tournament in program history.

BU Head Coach David Quinn was gracious but disappointed after the game.

“I first want to congratulate Northeastern. They’ve got a heck of a hockey team. The penalties turned the game. You can’t commit offensive zone penalties against that team. We committed two of those.”

The loss drops BU to 15-12-3 overall. The Terriers hit the road for two games this weekend. They’ll play the Connecticut Huskies on Friday night in Hartford, CT, and the Merrimack College Warriors on Saturday night in North Andover, MA. Puck drops at 7 pm at both the XL Center and Lawler Rink.

Northeastern was jubilant in victory and showed remarkable perspective. Freshman Cayden Primeau was awarded the Eberley Trophey as the tournament’s best goaltender. He saved 75 of 77 shots for a .974 save percentage, good for third in Beanpot history. “We knew that the Beanpot was gonna be big. When everyone’s asking about it, it’s hard to put it in the back of your mind. You know you’re playing for your school, the alumni, students, your family, and your brothers. I’m super proud of the group and I’m happy I was able to do it with them.”

Adam Gaudette won the Beanpot MVP with a hat-trick in the championship game. He also had a goal and two assists for three points against Boston College in round one, to give the senior from Saugus, MA, six points in the tournament.

“I’ve been coming to these games since I was little. When I realized out I had a chance to play college hockey, I wanted to play for a Beanpot school and I wasn’t going to take no for an answer. It’s been so long since we won one here, and this is special, to do it with these guys.” Gaudette also set the record for career power play goals at Northeastern with 31.

Huskies Head Coach Jim Madigan was elated after the win.

“Just thrilled for so many different parts of Northeastern University, first and foremost for our hockey club who worked their tails off and were so focused on this tournament and bringing the Beanpot back to Huntington Avenue. People keep asking about it and it starts playing on you mentally. These young men stayed focused and blocked out the noise as much as you can and were so focused and driven to make sure this came back to our university.”

Northeastern’s record climbs to 17-8-5 with the win. The Huskies will celebrate their win, but look to win more trophies this year. They travel to Burlington, Vermont, to face the Vermont Catamounts this weekend. Puck drops at 7 pm both nights at Gutterson Fieldhouse.