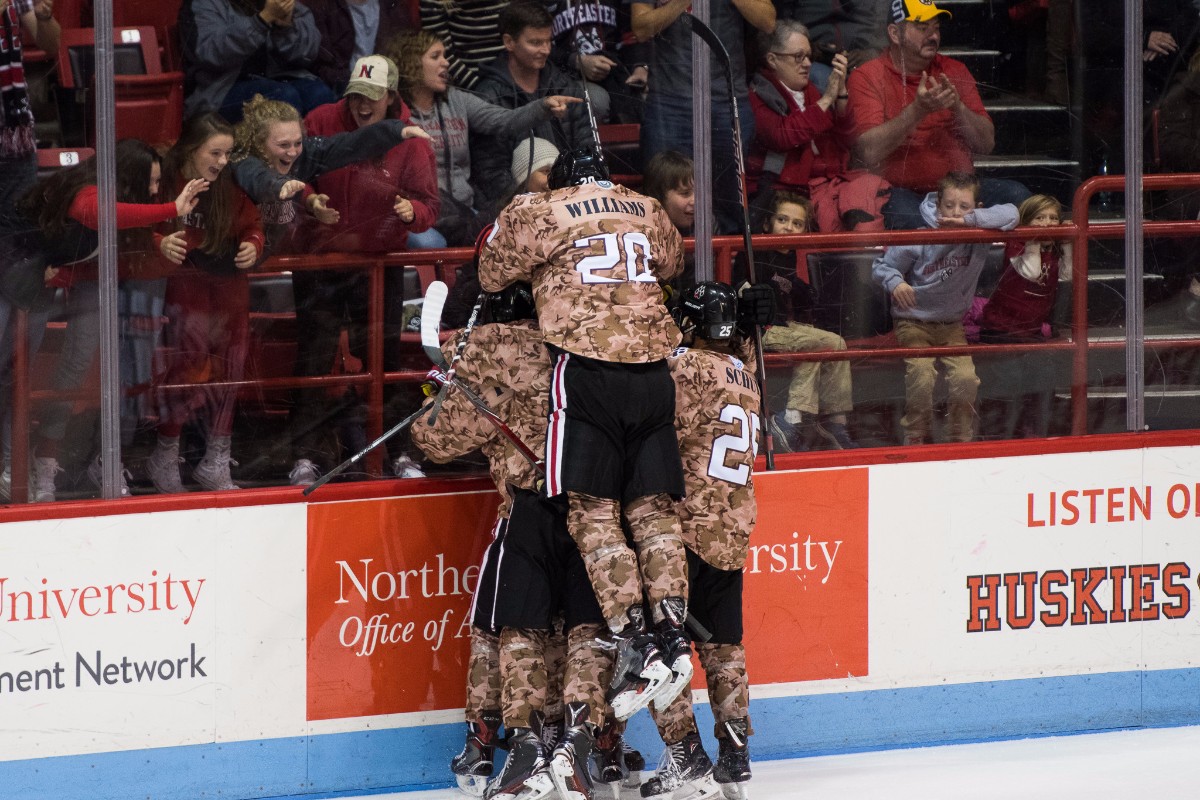 Friday night saw Northeastern University flex their offensive muscles over the University of Maine Black Bears. The Huskies rolled to a 5-3 victory that included a four-minute stretch with three goals. The teams rematched on Saturday night at Matthews Arena and Northeastern had a chance to claim first place in Hockey East. Instead of a high flying game, the fans watched a war of attrition.

The first period again featured Northeastern’s offensive might. NU outshot Maine 15-8 in the first 20 minutes, but only got one puck by Maine freshman Jeremy Swayman. And it wasn’t even a Husky who did that. Maine’s Chase Pearson tried to clear the puck to the end boards but put NU up with an own goal. Grant Jozefek was awarded the goal as the last Husky to touch the puck.

Maine tied the game after the halfway mark when Alexis Binner sniped on Northeastern freshman goalie Cayden Primeau for his first collegiate goal. The Black Bears kept the attack going and netted the go-ahead goal on Mitchell Fossier’s hustle to a loose puck.

Northeastern entered the second period down and only got eight shots on net in the frame. That was enough to land two goals in the period. Eric Williams got the first with a wrister from the right faceoff dot.

The second came when Dylan Sikura netted his 12th goal of the season 16 seconds after a Brendan Robbins tripping penalty. After some clean skating and scoring, the Huskies took a 3-2 lead into the final frame.

The third period featured 10 penalties for the teams with 57 penalty minutes. Just before the halfway mark of the period, Brady Keeper was called for an elbowing penalty. He disagreed and slammed the door when he got to the box. For that, he was ejected from the game.

Just after the halfway point, Eduards Tralmaks hit Ryan Shea from behind into the boards. He was issued a five-minute major penalty and an automatic game misconduct.

On the ensuing power play, Brandon Hawkins netted a goal from the left goal line. Maine pulled Swayman for the extra attacker, but could not get a shot on Primeau. Nolan Stevens potted an empty net goal to end the Black Bear’s comeback hopes. Nolan Vesey did land a goal after the empty-netter, but it was too little too late for Maine, as they lost their second consecutive game 5-3.

Maine Head Coach Red Gendron was not happy with his team after the game.

“We were frustrated, but that doesn’t excuse our behavior. The coaches agreed that the call on Brady was a penalty. Whether a player agrees or not doesn’t give him license to act like that. We came in here feeling good and playing well. We found out that there’s a lot of work to do.”

Swayman performed as well as he could, saving 32 of the 36 shots he faced. With the loss, Maine falls to 11-9-2 overall and 5-6-1 in conference. Maine returns home on Tuesday night to face the UMass Amherst Minutemen. Puck drops at 7 pm at the Alfond Sports Arena in Orono, ME.

“That’s a good, hard-nosed team we played tonight. To get two wins and four points in the conference is a big deal for us. We capitalized on our chances. There’s always more to grow, but I like where we are now.”

Cayden Primeau only faced 20 shots and saved 17 of them. Eric Williams and Nolan Stevens both recorded multi-point games with a goal and an assist. With the win, Northeastern climbs to 14-5-3 overall and 10-3-1 in Hockey East.

The Huskies leapfrog Boston College for first place in Hockey East. NU hits the road next weekend for a Friday night matchup with the UMass Amherst Minutemen. Puck drops at 7 pm at the Mullins Center in Amherst, MA.