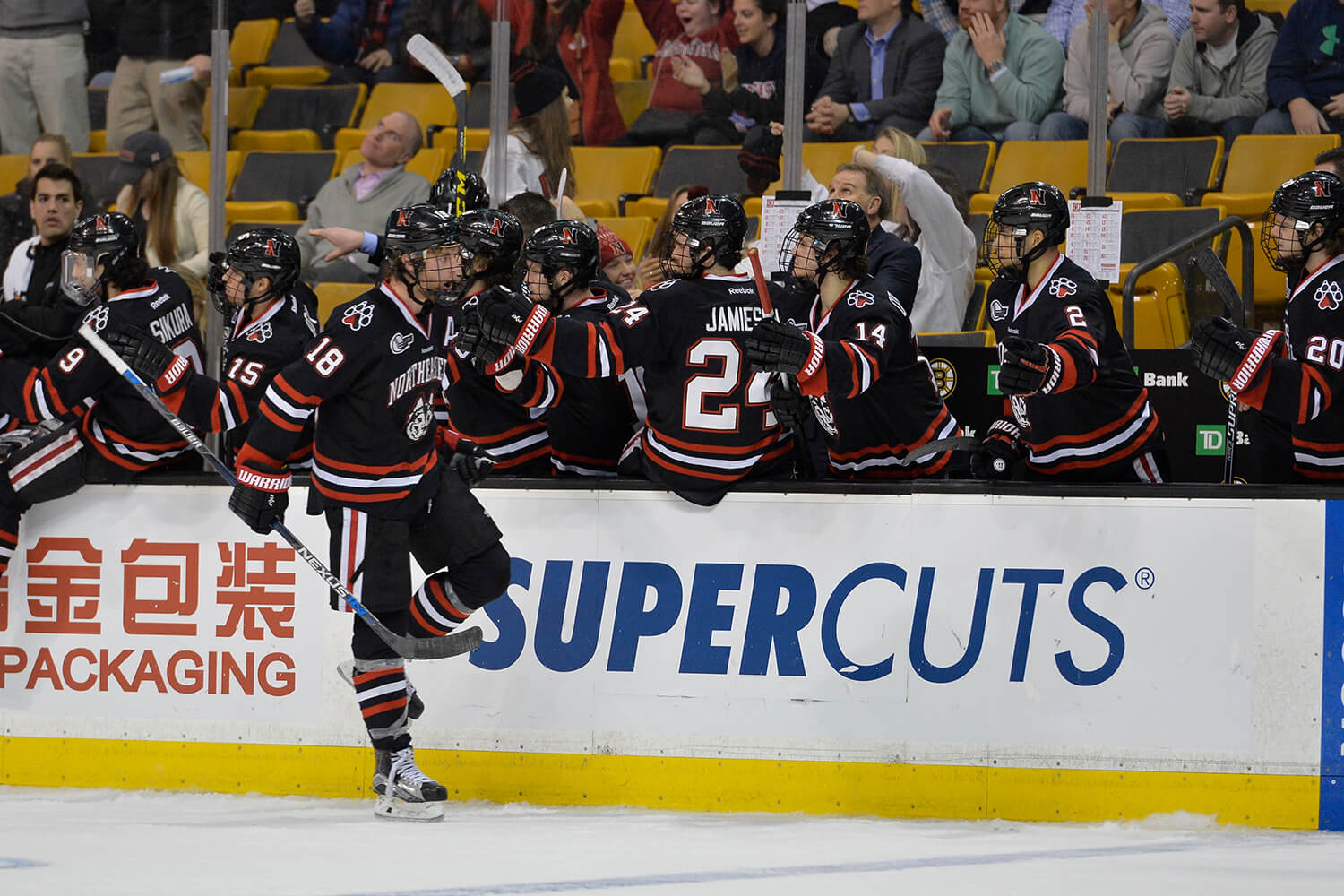 Huskies Shoot Down Eagles in Conte

This season has been different for Northeastern University. The Huskies entered Saturday night in sole possession of second place in Hockey East behind strong goaltending, a talented offense, and the steady guidance of Jim Madigan. They ended a long losing streak at Agganis Arena earlier this season and went into Saturday night looking to end another long winless streak.

The Huskies last victory over Boston College at Conte Forum was on March 7th, 2008. Since then, the Huskies have gone winless in twelve consecutive attempts in BC’s building. NU’s high flying offense came out ready for a victory against the top team in Hockey East.

The first period was ugly. Between the two teams, there were nine penalties committed. Northeastern committed the first two, but avoided any BC goals.

The Huskies neutral zone game, stick checks, and skating kept BC from getting a shot on goal until midway through the period. BC, meanwhile, made mistakes that did not go unpunished. While skating four on four, Graham McPhee was called for a slashing penalty.

On the ensuing power play, NU rang the post and ran into Joseph Woll before Jeremy Davies finally got the puck in the net. After the halfway point, David Cotton was called for a hooking penalty.

Dylan Sikura netted a putback goal on the ensuing power play. Shortly thereafter, BC lost composure. Chris Grando and Aapeli Rasanen were both sent off the ice. Grando sat in the bin for hooking and Rasanen hit the showers for a hitting from behind major and a game misconduct. O

n the ensuing five on three power play, Adam Gaudette continued the top line’s offensive display and made the score 3-0, where the score stayed into the intermission.

The second period started off just as poorly for BC. Trevor Owens extended the Northeastern lead on a blue line wrister 3:16 into the frame. That goal chased Joseph Woll from the game. The sophomore allowed 4 goals on 12 shots faced.

Ryan Edquist replaced him and ran into similar troubles. Christopher Brown was called for tripping and 14 seconds into the ensuing power play, Dylan Sikura netted his second goal of the night and gave Northeastern a 5-0 lead.

BC did not stay down. They outshot Northeastern 19-9 in the second and started to claw their way back. Michael Kim sniped a shot from the left half boards and got BC on the board.

Two minutes later, Matt Filipe and Garrett Cecere were sent of for minors. Cecere for roughing and Filipe for grasping the facemask. On the ensuing five on three, Christopher Brown got his team closer on a rebound putback. BC kept attacking, but could not get another goal late and Northeastern escaped to the locker room with a 5-2 lead.

The two teams only committed one penalty, and no one scored in the period. BC pulled Edquist late for one last desperation attempt, but could not get another puck by Cayden Primeau. Northeastern closed out their first victory in Conte Forum in 12 tries, 5-2.

Jim Madigan was proud of his team’s efforts.

“We’ve got a good team. I didn’t say anything to them about the long stretch of not winning, this group doesn’t own the program’s past. If we play to our identity, we are a great team.”

Northeastern’s top line of Nolan Stevens, Adam Gaudette, and Dylan Sikura posted three of the five Northeastern goals and assisted on all but one, the Trevor Owens goal.

Check out the highlights from tonight’s 5-2 victory against the Eagles: https://t.co/XwrNGzOt9G#GoNU | #RedBlackOnePack

With the win, the Huskies climb to 10-5-1 overall and 8-3-0 in Hockey East. They extent their hold on second place in the conference to three points over Providence and Boston University. The Huskies will close out the first half of the season next week against Merrimack on Saturday. Puck drops at 4pm at Lawler Rink, in North Andover.

Boston College committed 10 of the 16 penalties on the night and could not dig out of the hole. Jerry York was disappointed but still kept perspective.

“If we could’ve gotten one more goal late in the second, we had a chance. Credit Northeastern, they’re a good team and they earned the win. I like our team. We’ll get into the meat of the Hockey East season after the break and I like this group.”

The Eagles fall to 9-7-2 overall and 9-3-0 in Hockey East. Their lead on first place in the conference falls to only two points over Northeastern. BC will sit for exams before returning to the ice on December 30th for a home game against the Connecticut Huskies. Puck drops at 3pm at Conte Forum.