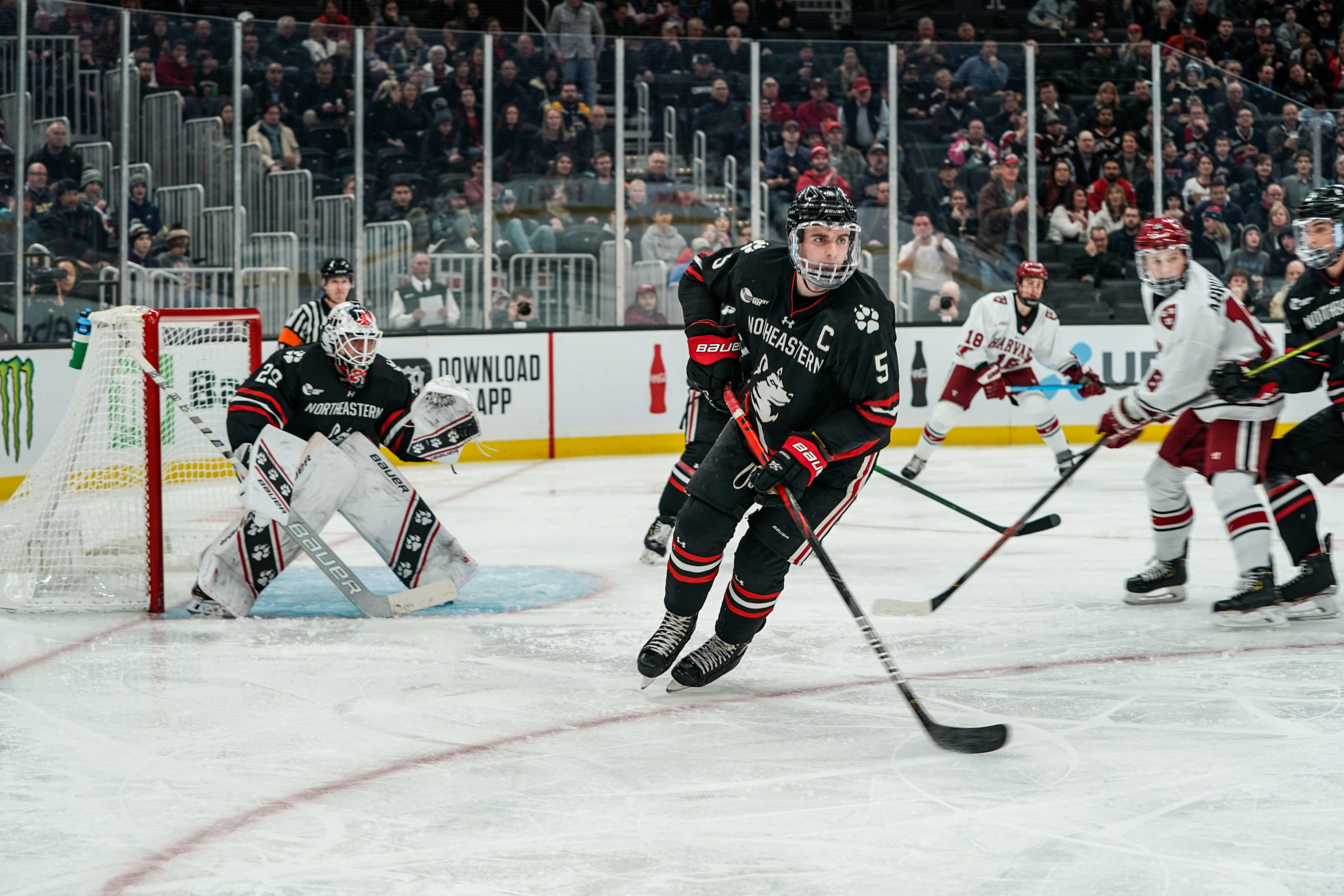 Boston, MA – A late second period goal from graduate transfer student Brendan van Riemsdyk coupled with 27 saves from graduate transfer student Craig Pantano was enough to power the Northeastern Huskies to their third straight Beanpot Final next Monday at TD Garden. The Harvard Crimson threw everything they had at the Huskies in the third period but it wasn’t enough to keep them out of next week’s consolation game for the third straight year.

Huskies defenseman Jordan Harris was called for Tripping at 5:56 giving the nation’s top ranked power play unit the first chance on the man advantage. It only took the Crimson thirty-nine seconds to grab the early lead. Jack Drury continued his hot streak when he took a Nick Abruzzese pass on his backhand in front of Northeastern goalie Craig Pantano, quickly got the puck to his forehand and roofed the puck over Pantano. The goal was Drury’s 14th of the season and sixth in the last four games.

Harvard’s Henry Bowlby was called for Slashing in the Huskies zone at 11:52. Northeastern made the Crimson pay at 12:20 when Zach Solow tipped a Ryan Shea slapshot from the blue line past Mitchell Gibson tying the game 1-1. Solow’s 11th of the year was assisted by Shea and Tyler Madden.

The Huskies outshot the Crimson 13-8 in the first period.

Northeastern had two power plays in the middle frame. The first coming at 11:23 when Harvard defenseman Jack Rathbone was sent off for Tripping. The second came when freshman Austin Wong was called for Elbowing at 17:26. The Crimson penalty kill was able to keep the Huskies from generating a shot on goal on either man advantage.

However the pressure that the Huskies had going as the Wong penalty expired leading to van Riemsdyk’s goal with just :30 remaining in the period. Grant Jozefek corralled a Riley Hughes pass behind the Crimson goal and fired a no look pass to van Riemsdyk in front of Gibson. The 6′-4″ forward from New Jersey beat Gibson high for the 2-1 lead. The goal was van Riemsdyk’s second of the year.

Just as play expired freshman defenseman Jayden Struble was called for Tripping at the 20:00 mark putting Harvard up a man to open the third period. The Crimson outshot the Huskies 6-4 for the period for a two period total of 17-14.

Mike Kesselring was called for Cross-Checking just :16 into the period giving the Crimson a five on three power play for 1:46. The Huskies were able to limit Harvard to three shots on Pantano for the power play.

Harvard continued to attack the Northeastern zone throughout the period. The Crimson carried play in the Huskies zone for a majority of the action. The Huskies Hughes did threaten Gibson with a shot from the right face-off dot that Gibson blockered it away.

During one play after a Northeastern timeout, Abruzzese held the puck in the high slot, deked on a defender and fired a shot on Pantano. Casey Dornbach crashed the net for a rebound attempt at the left post that Kesselring was able to get a leg on to keep it out of the Huskies net.

With Gibson out of the Crimson net for an extra attacker, Northeastern’s Matt DeMelis carried into the Harvard zone and just missed the empty net wide from the right face-off dot.

With :50 left senior defenseman Shea cleared the puck from the Huskies zone while at the left face-off dot watching it slow roll into the empty Crimson net to close out the opening round game and propel the Huskies to a 3-1 win.

Despite losing the game, the Crimson outshot the Huskies 28-24 and won the face-off battle 35-24.

“It was a hard fought game. They just ultimately made one more play than we did,” said Harvard coach Ted Donato. “We had our chances, had that five on three, offensive looks. I thought (Craig) Pantano made some big saves in the second half of the game.”

“I thought our execution wasn’t great on both the six on four and the five on three. Ultimately we needed to get a goal there. I thought we were pressing, I thought we did a lot of good things. Give them credit. Give Pantano credit, he made the big saves when they needed him too,” said Donato.

“This is a big, emotional game for all the guys,” said Northeastern coach Jim Madigan. “Anytime you can get a win in this tournament, this venue, it’s special. I’m happy for all our guys for the win.”

“We thought it was a real good hockey club we just played and they were carrying the play to us in that third period,” said Madigan. “We had a ‘bend but don’t break’ mentality. I thought our goaltender was the difference. He made a lot of key stops for us. Again, in this tournament you need great goaltending and we got that today.”

“Brendan van Riemsdyk who has been a little bit gun shy around the net, a little bit snake-biten. We talked the other day that it was quality not quantity. And boy did he deliver a quality goal in a big time opportunity. I’m happy for him. I’m happy for all our team that we have a chance to come back here on Monday and play in the championship.”

Big conference games await each team on Friday night. The Crimson travel to Hanover, NH to take on Dartmouth in ECAC action at 7:00 pm EST while Northeastern heads to Orono, ME to face the Maine Black Bears in Hockey East play with a 7:30 pm EST puck drop.