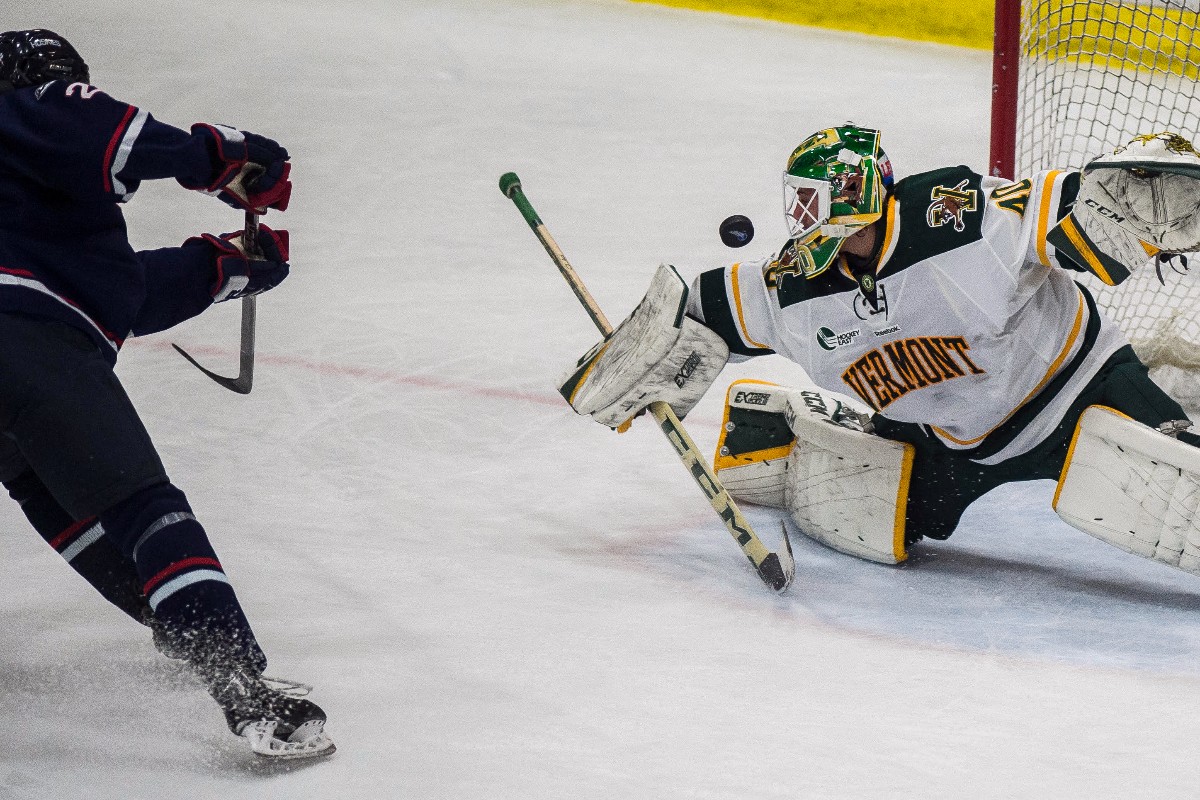 UVM goalie Stefano Lekkas deflects a shot from UConn's Maxim Letunov during their Hockey East men's hockey match up at Gutterson Fieldhouse Tuesday night, Nov. 21, 2017. By the end of the second period, UConn had 28 shots on goal, leading 3-0.

Neither the Connecticut Huskies nor the Vermont Catamounts have met their expectations this season. Both teams have struggled in the grueling Hockey East schedule, entering Thanksgiving week with five and three conference points respectively. UConn made the trip to Burlington to try and win the season series from the Catamounts, improve their place in the standings, and win in Gutterson Fieldhouse for the first time since January 1965. And on Tuesday night, the Huskies did exactly that.

UConn ran the Catamounts out of their own building in the first period, dominating the shot total 17-8 and scoring three times. Only 2:02 into the game, Jesse Schwartz broke behind the Vermont blue line and beat goaltender Stefanos Lekkas five-hole for an early first strike.

About four minutes later, the score got worse. UConn created some great chances and Kasperi Ojantakanen put in a loose puck following a Miles Gendron wraparound shot. Lekkas had made three difficult saves shortly before the goal and yelled at his teammates to give him some more help. Sadly, he did not get much more help. UConn went on the power play following a Bryce Misley tripping call. UVM nearly had a successful clear, but Philip Nyberg caught the puck and played it to himself at the blue line. He carried it forward to the top of the right circle, and fired it on Lekkas. It beat the sophomore glove side and caught the inside of the post for the third goal of the period.

The Husky domination continued into the second period. It took until six minutes of the frame were burned off for Vermont to get a single shot on UConn netminder Adam Huska. However, Vermont began to turn the tide near the midway point of the game. They won more neutral zone battles and created more chances. They got three shots and many incredible looks on a power play following a Karl El-Mir tripping whistle, and won the 2nd-period shot battle, 12-11. They just couldn’t beat Huska and went into the third down 3-0.

Vermont tilted the ice decisively in their favor in the third period. They dominated the shots 20-10, controlled the pace, and put a scare into the Huskies. The Catamounts got on the board with a power-play goal from Alex Esposito early in the frame. They kept firing, but could not notch another goal. Adam Huska stood on his head, making 19 of his 39 saves in the third period and shutting the door on any chance of a Catamount comeback. Max Kalter scored an empty net goal to squash the final push, and the Huskies escaped Burlington with a 4-1 victory.

Connecticut climbs to 4-10-2 overall and 3-6-1 in the conference and wins the series against Vermont for the first time since joining Hockey East in 2014. Head Coach Mike Cavanaugh said of the effort: “I think we had an excellent start. It’s been a problem for us this season, but tonight we got out to a big lead early. I liked our first ten minutes of the second period too. We had some chances to blow that game open. Then they tilted the ice on us and Adam played his best game of the season. I’m happy for our guys for getting their first win up here.”

Benjamin Freeman had two assists for his first multi-point game since October 6th at Maine and the third multi=point game of his career. 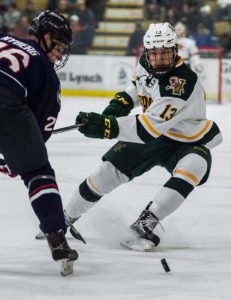 UConn returns home for a Saturday afternoon tilt at the XL Center against the Rochester Institute of Technology Tigers. Puck drops at 3:05 pm.

With the loss, Vermont falls to 3-9-1 overall and 1-5-1 in Hockey East. They now have sole possession of last place in the loss column and the lowest scoring offense in the league, with 2.33 goals per game and three consecutive one-goal games. Head Coach Kevin Sneddon expressed befuddlement and disappointment at his team’s struggles. “I’ll take responsibility for that game. I thought we did a lot of good things in the latter part of the game, especially the third period. That’s the way we want to play. But we dug ourselves too deep a hole and I’ll take responsibility for that as the head coach. I don’t know why we’re struggling to start, but we need to find some answers soon.”

The Catamounts will try to right the ship with a trip to Hanover, NH, to play the Dartmouth College Big Green. Puck drops on Saturday at 7 pm.