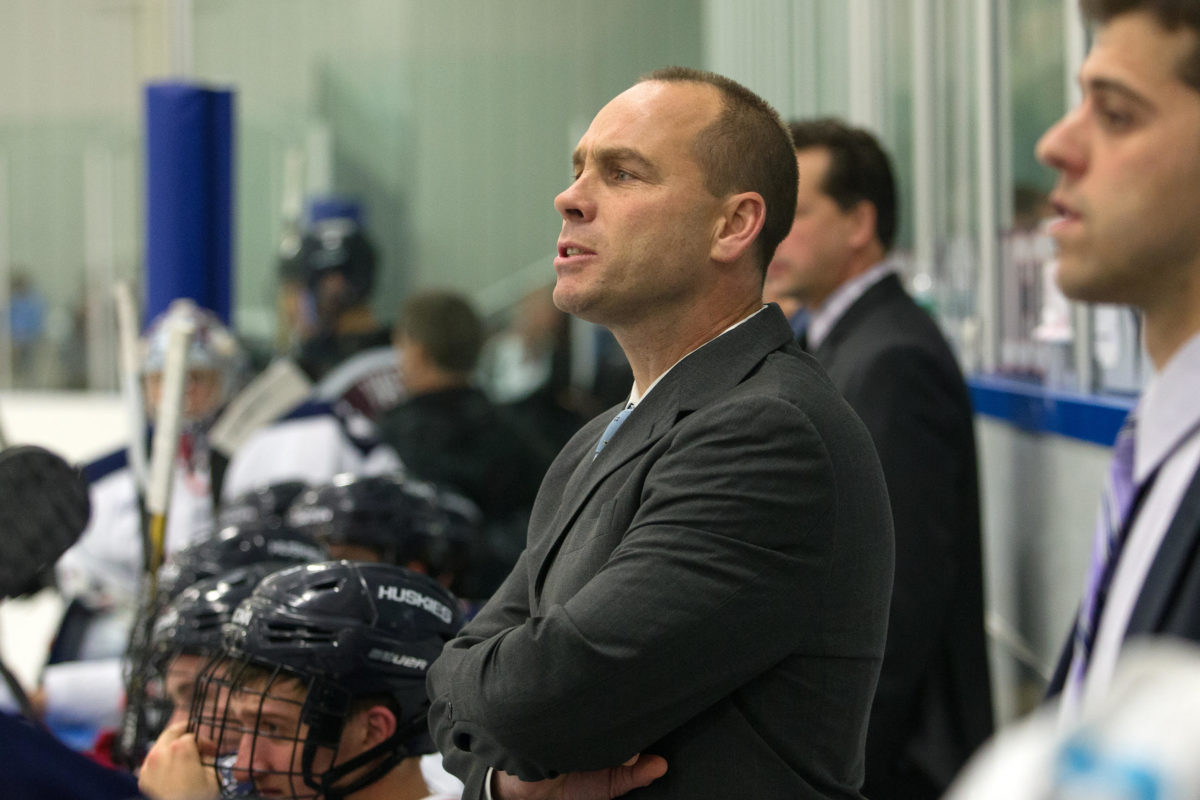 Hartford, CT- Mike Cavanaugh’s young pups have authored a curious season through a month and change. The Connecticut Huskies have hovered around .500 all season and have shown both flashes of talent and bouts of frustration, particularly in closeout moments. They played host on Tuesday night to the Brown University Bears for the first time in three seasons and showed that young talent and an ability to close out games.

Normal starter Adam Huska got the night off and freshman Tomas Vomacka, a 5th round NY Islanders draft pick from Trutnov, Czech Republic, got his first home start. He faced only four shots in the first period and saved all of them. On the offensive end, UConn gained the early lead. Kale Howarth won a faceoff and Johnny Evans immediately fired a wrister that ate up Brown sophomore goaltender Luke Kania. The Chicago native gathered himself and stopped the remaining shots he faced, totaling 9 for the frame, but Brown still trailed 1-0 at intermission.

UConn again controlled the second period, outshooting Brown 12-8 in the middle stanza. Near the mid-point of the frame, Jake Harris took a slashing minor and sat in the sin bin. UConn’s power play worked to perfection as Jonny Evans potted his second goal of the night from the right doorstep following crisp passes from Carter Turnbell and Benjamin Freeman. Vomacka was again strong and UConn led 2-0 at the break.

Brown upped their pressure as UConn committed a plethora of mistakes to open the third. The result was a 14-5 shot advantage for Brown the end of Vomacka’s shutout bid. Tony Stillwell got Brown on the board with a wrister from the right circle that ate up Vomacka and cut UConn’s lead to 2-1. Brown continued to dominate the final frame, but Vomacka remounted the horse and closed the game with toe saves sprawling efforts and a strong demonstration of his talent. UConn also gave him some help with blocked shots, particularly by Karl El-Mir and Max Kalter. In fact, those two also combined for the game’s final score. Adam Karashik tipped a shot down and passed to El-Mir. The senior lugged the puck out of UConn’s defensive end and fired it to his classmate, Kalter. The Highland Park, IL. native deposited the puck into the empty net for a 3-1 final score.

Brown dropped their record to 1-5-1 with their second consecutive loss. All but one of their games have been determined by two goals and Brown has only one win in those games. The Bears got seven shots on the power play but failed to score on four attempts, dropping their power play success rate to 8%, third lowest in the nation. They do not play until after Thanksgiving when they travel to North Country. The Bears visit Clarkson and St. Lawrence on November 30th and December 1st respectively. Puck drops at 7 pm both nights at Cheel Arena and Appleton Arena.

UConn evens their all-time series with Brown at 5-5-1. Jonny Evans recorded his first collegiate multi-goal game and second multi-point game, his first was in Hamden on October 16th against Quinnipiac. Tomas Vomacka recorded 25 saves on 26 shots faced and through three games has only allowed four goals. Mike Cavanaugh spoke well of his young troops after the game.

“Certainly happy with the result tonight,” Cavanaugh said. “When you have eight or nine freshmen in your lineup every night, I think the hardest thing to do and learn is how to close games. The only way you can learn how to do it is by experience. We’ll get better. Overall, a good win and we’re happy with that.”

Evans after the game was deferential to his teammates regarding his scoring outburst.

“My linemates made it pretty easy on my tonight,” Evans said. “Kale won the draw; we work on that almost every day in practice, just the quick hit. Wiso (Evan Wisocky) boxed out a guy so I could get the shot off. My linemates made it really easy on me tonight. ” On the second goal, Evans explained the play as result of good fortune and positioning. “Ben (Freeman) threw the puck where I needed to be. I just kinda reached out and threw it. It, fortunately, hit the far side post and went in.”

UConn improves to 5-4-1 overall. They resume conference play with a home-and-home against UMass Lowell. Puck drop at the XL Center for Friday night is at 7:05 om while the Saturday tilt at Tsongas Center starts at 5 pm. The day after, UConn flies from Bradley International Airport, in Windsor Locks, CT, to Belfast, Northern Ireland, to take part in one of college hockey’s newest great traditions, the Friendship Four. The event provides two ECAC and two Hockey East teams each a chance to visit a post-troubles Belfast, learn about the culture, promote the game in foreign territory, and play some competitive hockey. UConn, Boston University, Yale, and Union make the trip this year. UConn gets BU first on the Friday after Thanksgiving at the SSE Arena in Belfast. Puck drop is at 7 pm GMT, 2 pm ET