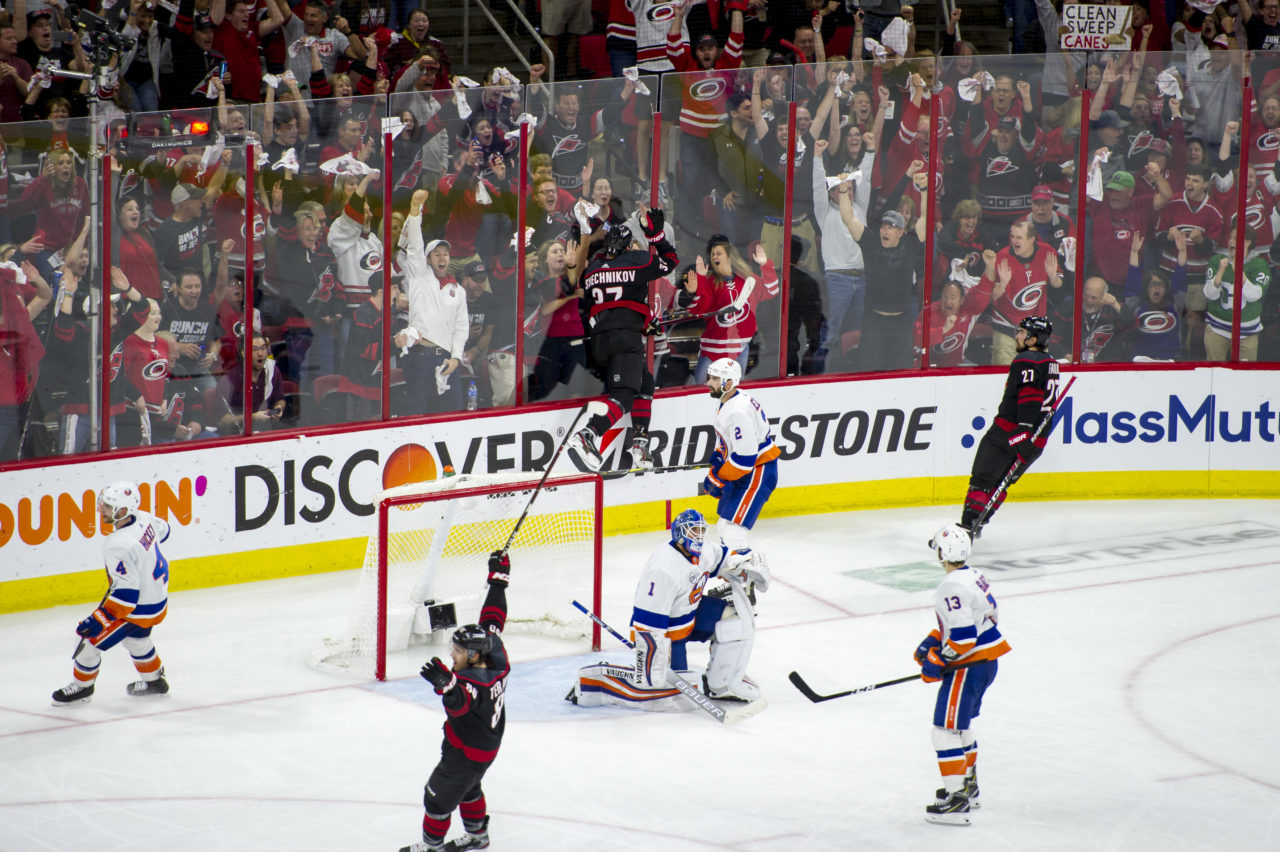 Carolina Hurricanes forward, Andrei Svechnikov (37), celebrates after scoring a goal late in the third period of game four in the second round of the NHL playoffs between the New York Islanders and the Carolina Hurricanes.

RALEIGH- The Carolina Hurricanes hosted the New York Islanders at PNC Arena in Raleigh for Game Four of round two in the Stanley Cup Playoffs. Coming into the game, Carolina had a 3-0 lead in the series and looked to sweep New York after coming out of a close series against Washington. The Carolina faithful would pack the PNC Arena, setting a new attendance record for hockey in Raleigh. The Canes would not disappoint in their efforts against New York, proving that they are more than a bunch of jerks.

Both teams came out aggressive in the first period, setting the stage for the rest of the game. New York would strike first, three minutes into the game with Mathew Barzal scoring off an assist from Devon Teows and Jordan Eberle. However, the lead would not last as Sebastian Aho  tied the game with a power-play goal after a roughing penalty was called on Islanders’ forward Leo Komarov. The period would end 1-1 with Carolina shooting five attempts on goalie Robin Lehner.

Carolina controlled the second period, with the home team scoring three goals in a seven minute span. The first would come from Teuvo Teravainen, being assisted by Warren Foegele and Aho. A minute later, Greg McKegg would be in perfect position to hit a short wrist shot on Lehner to secure a 3-1 lead. After this goal Coach Barry Trotz for the Islanders would pull Lehner out of the game and put in backup goalie Thomas Greiss. This would not help New York however, leading to Justin Williams securing his 100th playoff goal of the season with eleven minutes left in the period. The period would end 4-1, leaving the 19,495 Caniacs in attendance screaming “sweep”.

The story of the third period was Canes’ goalie Curtis McElhinney coming up clutch for Carolina. After the mishap in the first, he would save all shots that mattered. Everything New York tried in the third seemed to be non existent, exhibiting no signs of a come back for their playoff hopes. One last goal by rookie Andrei Svechnikov would secure the win for the Carolina Hurricanes.

The victory secures the 4-0 sweep, advancing them to the Eastern Conference Finals to face off against the winner of the Boston Bruins and Columbus Blue Jackets series. The Canes have never been more dominant, winning their last six games in a row, proving they are dangerous contenders for the Stanley Cup trophy. The winning streak is their longest in years, including the regular season.

If Columbus advances to the Eastern Conference Finals, the Hurricanes obtain home ice.