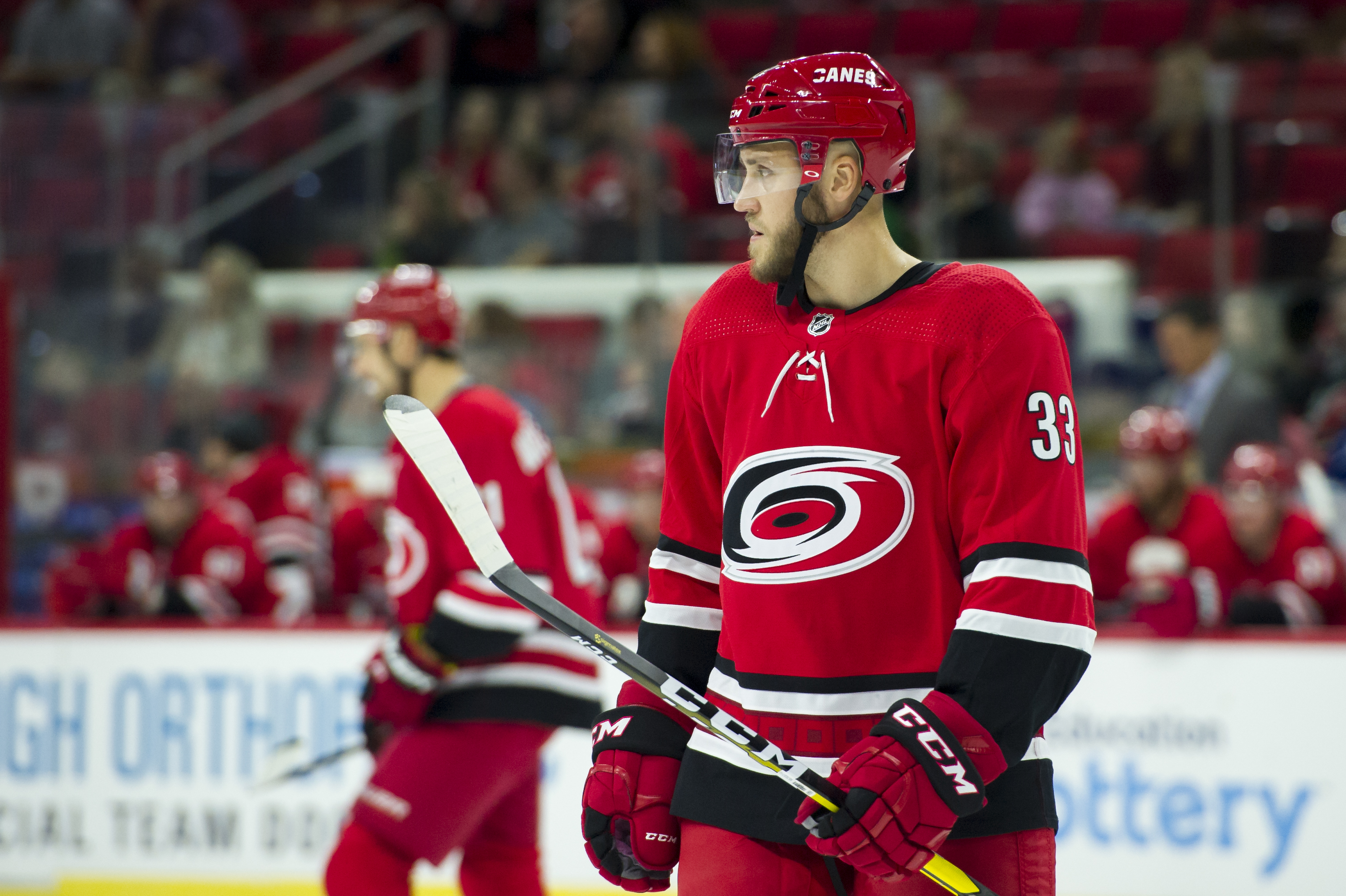 Carolina Hurricanes defenseman, Fredrik Claussen (33), skates during a stoppage in the first period of a preseason matchup between the Tampa Bay Lightning and the Carolina Hurricanes at PNC Arena in Raleigh, NC, on September 18, 2019.

RALEIGH, NC– The Carolina Hurricanes hosted the New York Rangers on Thursday night at PNC Arena. The Hurricanes came into the game with a record of 9-5-1, while the Rangers came in at 6-6-1. After starting red hot, Carolina lost its last two games against the New Jersey Devils and Philadelphia Flyers. The Canes hoped to get back on the right track in front of their home crowd in Raleigh.

In the first period, Carolina tried to floor the gas pedal, coming up with 22 shots on goal. However, with one power-play opportunity, the Canes could not come up with a goal. The Rangers would take full advantage, as they would draw first blood. Atremi Panarin, forward for New York, hit a snapshot on goalie Petr Mrazek to make the game 1-0. He would be assisted by Ryan Strome and Jesper Fast. The period would end with the same score, making the Canes hungry to produce a goal.

Carolina would successfully produce in the second period, however, their defense would not do the same. With six minutes left in the period, Dougie Hamilton pounced on a tip-in opportunity to tie the game, off an assist from Jaccob Slavin and Teuvo Teravainen. The tie would not last long, as Brendan Lemieux would score off the power-play to take the game back 2-1 New York. Through both periods, the Canes would shoot more shots on goal, however, it would not help create more goals. The Canes had one more period to make the comeback and secure another win for the 13,000 fans in attendance.

The final period action was fast-paced, with both teams showing urgency to win for their club. The Rangers would once again score with only a minute into the third off of a backhander from Pavel Buchnevich. Sebastian Aho would answer to give life back into the Canes after scoring a wrist shot on New York’s goalie Henrik Lundqvist. Once the game was back at 3-2, Coach Rod Brind’Amour would pull Mrazek from the net to have six men on the ice. The 6-5 advantage would not help, however, only allowing the Rangers to score one more goal. The game would end 4-2 with the New York Rangers on top.

With Carolina now having three losses in a row, they have an opportunity to break their streak in Ottawa Canada, against the Senators. The Canes’ next home game is on Monday the 11th against the Senators as well. Coach Brind’Amour said after the game that “[he] is looking for a perfect game” from his club. We will see in the next two games if the Canes can make that happen.