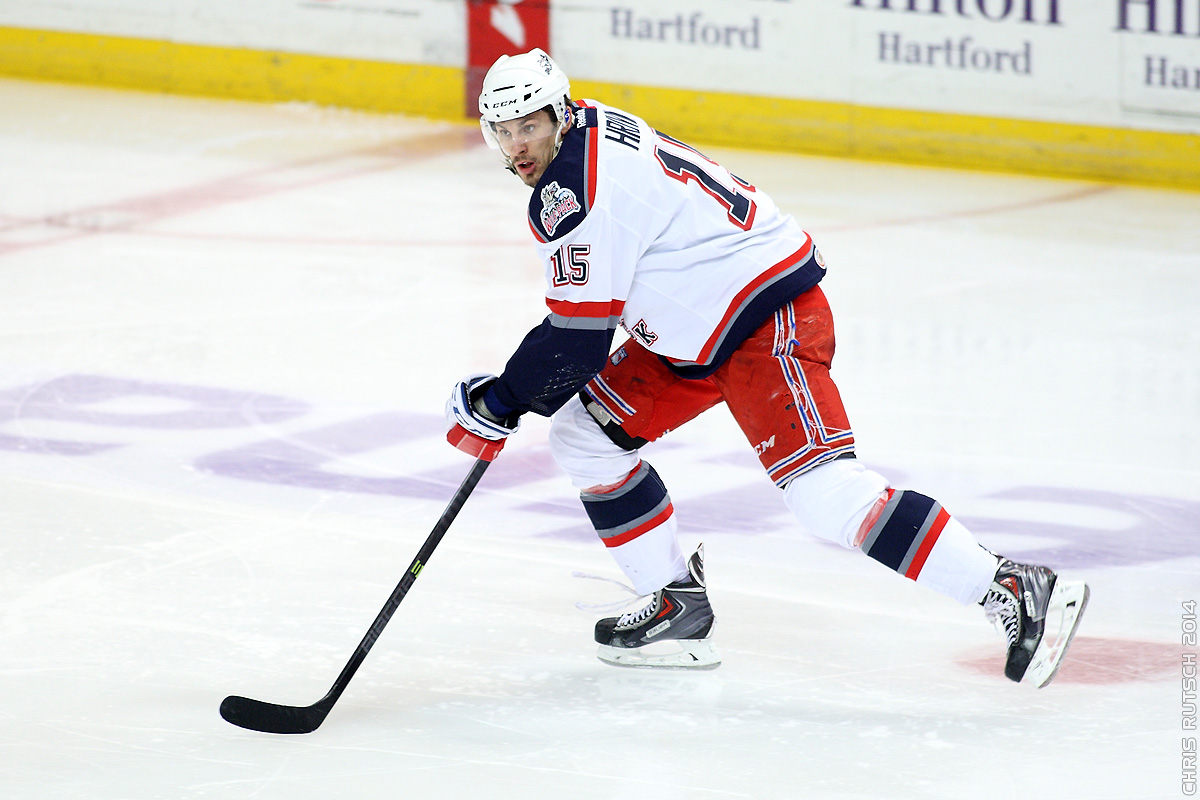 Hartford, Conn. – It was yet another night on the ice at Hartford’s XL Center, with the Hartford Wolf Pack (26-15-3-2) coming out to play regional rival, the Springfield Falcons (26-15-4-0). The Pack, were coming off the high from last night’s game against the Bridgeport Sound Tigers (19-19-5-1) when they scored their most goals in nearly seven years in an 8-6 win.

Tonight’s crowd was huge, a sold out lower bowl of the arena. Being that it has been Hartford Hockey Heritage Weekend, it’s no surprise that loyal Pack fans were coming out for their team. Coach Ken Gernander was honored for his 300th win pregame, receiving loud applause from the crowd. With it being such a big game, it was clear that the Wolf Pack were not going to let the Falcons run them over.

Starting off the first period on the right skate, the Falcons were called for a tripping penalty, resulting in a power play for the Wolf Pack. Marek Hrivik took the opportunity to put one in the net. Taking a 1-0 lead at 3:15, the Wolf Pack really seemed to have it together tonight. Although, Hartford came across a few more chances to score, they ultimately were not able to fully capitalize on the opportunities. The first period was still much cleaner than it had been in last night’s game.

A slow start for the second period, the Falcons came out more hungry after looking a little flat during the first. Rookie goalie Mackenzie Skapski was calm, cool, and relaxed as per usual. Both Gernander and other fellow players have regarded Skapski as being a calming influence and collected type of player – something very impressive for his age. The Wolf Pack, again, were given a few power play opportunities but failed to capitalize, which was the only major flaw in their play tonight.

Struggling more as the Pack couldn’t seem to get the puck out of their zone, at 7:38, the Falcons Marko Dano put one past Skapski to tie the game. This goal didn’t do anything to throw the Wolf Pack off their game. For the two rivals, the game appeared less chippy than usual, perhaps this is because of the two teams place in the standings? The teams are so close in their records, it’s no surprise that the teams would retain their focus, as this was a game for second place in the Northeast Division.

Really heating up toward the end of the period, Danny Kristo came in hot with a deflection goal at 15:11 to give Hartford the lead, 2-1, at the end of the second period.

Kristo appeared to be playing with a lot of confidence coming into the third period. The period got off to another slow start, with a bit of chippy play starting to come out on the Pack’s side. A couple of power plays given up to the Falcons, but Skapski managed to fend off any scoring opportunities. As the game began to wind down, Hartford grabbed a power play, the result of a minor scrum breaking out on the ice at 16:05.

With a little over a minute left, Springfield pulled their goalie, allowing Joey Crabb to put in the empty netter for his 9th goal of the season, and putting the icing on the cake for a Hartford Wolf Pack victory. The final score being 3-1 Hartford, the Pack’s win placed them past Springfield and into second place in the Northeast Division.

“Definitely on top of the game tonight,” Kristo said. “We’ve actually had a pretty solid past 10 games, everyone has been doing their part to make it work.”

In regards to the upcoming four-game road trip, Kristo said, “It’s be a big test of character, we’ll really have to work.”

The Wolf Pack will be on the road for the next two weeks, returning for a home game on February 14th against the Albany Devils.