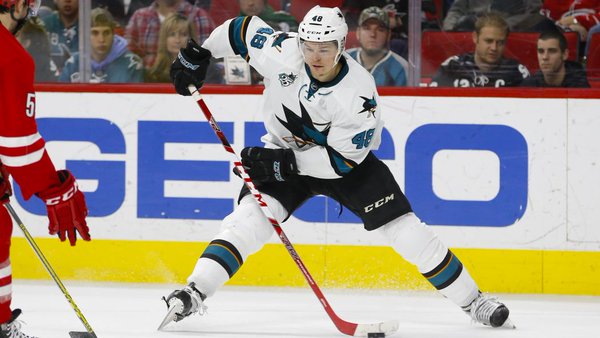 Hertl Starts to Live Up to Hype

Tomas Hertl had an amazing start to his rookie season in 2013-14. He recorded 25 points (15 goals, 10 assists) in 37 games. At age 19, he became the first teenager to play in a season opener for the San Jose Sharks since Marc Edouard-Vlasic in 2006. He scored his first two NHL goals on October 5, 2013, against Arizona Coyotes goaltender Mike Smith. As a result, he became the youngest player to score two goals in one game since Patrick Marleau on March 17, 1999.

On October 8, 2013, Hertl scored four goals against the New York Rangers in a massive 9-2 victory at the SAP Center.

New York drew first blood, as Brad Richards scored on the power play, which was a 5-on-3 man advantage. Vlasic tied the game at 1 with a short-handed goal. The Sharks took a 2-1 lead, thanks to former Shark Dan Boyle. Matt Nieto opened the scoring in the second with his first NHL goal, extending the Sharks’ lead 3-1. Hertl scored two goals and Logan Couture scored his second goal of the season. San Jose had a remarkable 6-1 lead entering the third.

The Rangers tried to get back to the game, but their only other goal was scored by Derek Dorsett. The Sharks just kept rolling with four goals — two by Hertl and one by Justin Braun. San Jose won the game fair and square by a score of 9-2.

Hertl notched his first career hat trick with his third goal at 12:32 of the third. However, his fourth goal of the season stood out, as a hat trick wasn’t already enough. He scored on a breakaway from close range, dropping the puck back between his legs and beating Martin Biron on the forehead for a highlight-reel goal. This gave him a team-high six goals for the season. He also became the first player in Sharks history to score at least six goals in his first three games.

“It’s crazy,” Hertl told NHL.com correspondent Eric Gilmore. “This is a dream. Four goals. I never [scored four] in the Czech League, I never had three. In the NHL, it’s crazy.”

Hertl became the first Shark to score four goals in a game since Owen Nolan in 1995. He was also named October rookie of the month by leading all rookies with eight goals and 11 points in 13 games.

All in all, his rookie year was outstanding.

However, Hertl injured his knee after a collision with Kings captain Dustin Brown. He had surgery on his MCL and PCL in his right knee on December 31, 2013. After a 45 game absence, he was cleared to return to the Sharks against the Colorado Avalanche on April 11, 2014. Just six days later, he scored his first career playoff goal against the Kings.

Without a captain, San Jose missed the playoffs in the 2014-15 season for the first time since 2003. This was far from a great season for the Sharks. Head coach Todd McLellan agreed to part ways with the team after seven years. Former New Jersey Devils head coach Peter DeBoer was hired to replace him.

Hertl had a slow start this season, but managed to turn things around in the second half. This is a game changer for the Sharks because if San Jose wants to hold on to a playoff spot, they need to continue playing wonderful hockey.

In his last five games, Hertl has collected four points (2 goals, 2 assists). Twice, he scored the game-winning goal. He didn’t record any points in recent games against the Montreal Canadiens and Buffalo Sabres. It’s not an amazing statistic, but he’s heating up when his team needs it the most.

Hertl seems to have gotten out of whatever funk saw him bogged down in a five-game pointless streak in early February, as he’s registered nine points in his last 10 contests. Thursday’s outing was the 22-year-old’s seventh multi-point game of the season.

The Sharks will be relying on Hertl to provide additional scoring punch for them during the playoff stretch drive.