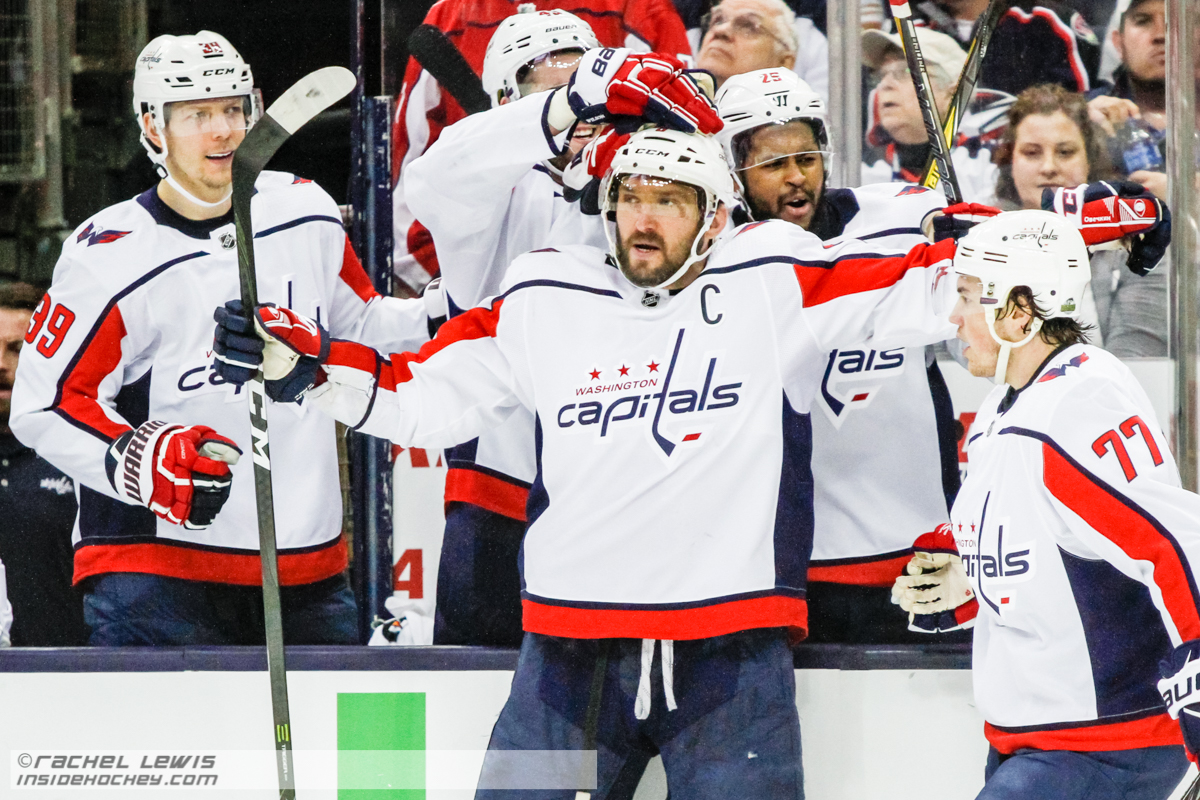 Alex Ovechkin (WSH - 8) celebrates his second goal with teammates at the Washington bench.

He, Who is Alexander Ovechkin

No, Alex Ovechkin, owner of seven scoring titles, a trio of Art Ross trophies (among other individual-owned hardware) and a 196 lead on Sidney Crosby for most goals since 2005-06,  won’t be defined by the void on his resume.

Barry Bonds, Marcel Dionne, Patrick Ewing and Allen Iverson won’t have company in the form of a 6-foot-3 sniper from Moscow who will almost certainly finish as a top-10 or better scorer in league history. His name to be etched on the almost three-foot, 126 year-old-trophy adds an exclamation point on the career of one of the most accomplished players in the game’s history.

The Stanley Cup, or lack thereof one, has the unique ability to serve as a glaring omittance to individual success, even when the player is as decorated as No. 8. Mike Gartner, Pat LaFontaine, Eric Lindros, Adam Oates are all parts of the frequent shortsighted conversations that measure individual success differently based on the absence of the pinnacle prize.

But for Ovechkin, this is all a moot point. History will have no excuse not to shine brightly on him.

He, who at 32, rebounded this season to mute whatever talk of a regression resulted from last season’s 69 points–a down season for the perennial 40-plus goal-scorer and regular 80-plus point-getter. He, who at 607 goals, has the ability and time left to secure 700 and beyond. And he, who is part of a cast that also includes Nicklas Backstrom, Evegeny Kuznetsov and Braden Holtby (and maybe John Carlson, too), has a considerable open window to contend.

The in-NHL club of elite talents with closing, cup-less careers has lost its poster boy.  Now occupied by the likes of Patrick Marleau and Joe Thornton, Henrik Lundqvist and Roberto Luongo and only until recently, Henrik and Daniel Sedin, too.

Even now, Ovi’s career isn’t as advanced as the above, but it had a sort of decided fate to it. Something about the regular season success including three President’s Trophy seasons, each met with sub-third round finishes in mid-Spring. Adorned with the ‘C’ since 2010, “The Great Eight” has worn the blame since–the proverbial ‘punching bag’ for a team synonymous with underachieving.

This spring looked to be a continuation of the D.C. norm.

A pair of losses at home to the wild-card Blue Jackets offered at least the solace of a quick, mild, Penguin-less death. But a four-game win streak including thrice in Columbus served as a nice comeback before the second round versus the threepeat hopeful-Pittsburgh. Because if Superman has kryptonite, Ovechkin has yellow, black and a flightless bird. But in a series that had an easy game six script to follow in overtime with the Pens needing a goal to force a game seven–it happened. But was the newfound success another path to newfound heartbreak?

Washington took the first two games on the road to a highly-favored Tampa team that disposed of New Jersey and Boston in quick order. The Bolts responded with three-straight wins and were poised to use its high-powered offense, that was shutout once in the regular season, to return to the Stanley Cup Final. But a pair of shutouts including a 4-0 final in game 7 ushered the improbable–Stanley Cup Final participant, Alex Ovechkin.

Improbable, even if the opponent in the club’s second Stanley Cup Final in 44 years,  the Vegas Golden Knights were hyperbole-proof. Fast, balanced, well-coached and with a franchise goalie and ex-Penguin in Marc-Andre Fleury, the writing seemed written on the wall. Because no history from the surprise first-year, expansion club is greater than whatever fate had seemed to befall Ovechkin for 10-plus seasons and the Capitals for 44 years.

But again. It happened. The team destined to fail did not. The captain resigned to mediocrity changed his fate and erased the “but” from whatever future conversation might exist in the years that follow his departure from the game. A first-ballot Hall of Famer won’t have any glaring regrets to mention in Toronto. Nor will he have any dissection of what’s missing. The emotion on the bench of a captain nervous, focussed and in the final moments, jubilant, put to rest whatever narrative might exist or take on a life about the leadership, character and a willingness of the individual to win.

And perhaps, as we pay witness to one of the best ever watching those questions fade, we might see a newly invigorated No. 8, one with more hardware (a Conn Smythe, too) and a taste for even more.