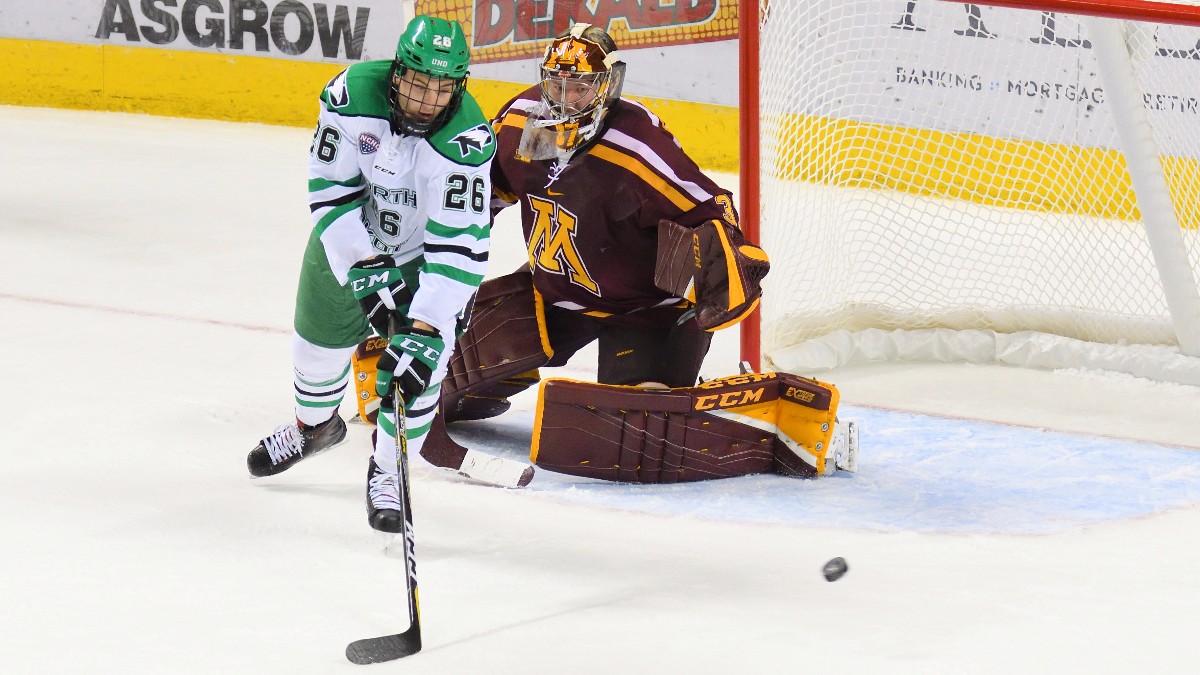 Hawks vs. Gophers: Part One

Originally posted at The Sports Daily – Goon’s World. Good afternoon from Denton, TX. After watching last night’s non-conference game between the University of North Dakota and the University of Minnesota, I think that the UND Hockey team is going very successful this season and win a lot of hockey games. Obviously, they’re  going to need to keep playing the way they have the last couple weekends.

Friday’s game was what I call a 50/50 game, either team could’ve won that game. Minnesota’s goalie played a bit better than North Dakota’s. Also, UND had two defensive mistakes that ended up in the back of their net. Those mistakes will need to be cleaned up by the coaching staff.

Moving forward, I think there’s a lot to be excited about. UND has shown that they have a lot of skill throughout their forward lines, they just need to find a way to score.

On Friday night, the Fighting Hawks came out of the gate took the play to the Gophers, then there was a senseless parade to the box.

“I thought our effort was there,” UND head coach Brad Berry said. “We started the game the right way. We took a few penalties in the first period, and I thought that gave them a little momentum.”

UND outshot the Gophers 34-16 but failed to cash in on their opportunities. The Gophers also blocked 29 shots.

“We didn’t play too much in our end of the rink, but they are very opportunistic,” Berry said. “When they had a couple of chances, they buried them. We had some looks, but they do a good job of blocking shots. We’ve got to get a better shot at getting more pucks to the net.”

I thought the Fighting Hawks had the right game plan but still ended up losing 2-1.

“We were relentless tonight,” Berry said. “I thought we pushed the pace. I thought we did a good job playing in the other team’s zone. They did a good job of defending, blocking shots. I think it’s another way that our team needs to find a way to win against a very good team. We’ll go over the tape tonight. We’ll make some adjustments.”

Too Many Perimeter Shots

While the Fighting Hawks put a lot of shots on the Gophers net, many of these shots were from the perimeter. They need to get to the blue paint like Rhett Gardner did on his goal. You have to go to nosebleed alley if you want to put the puck in the twine. If you look at this shot chart, you will see what I am talking about. UND needs to get more shots from the slot.

Good things happen when you go to the net. Enter Gardner.

? Just tap it in…@UNDmhockey's Rhett Gardner answers Minnesota's goal and it's a 2-1 game with under 6 minutes to play! #NCHCHockey pic.twitter.com/GhnEc8VFXj