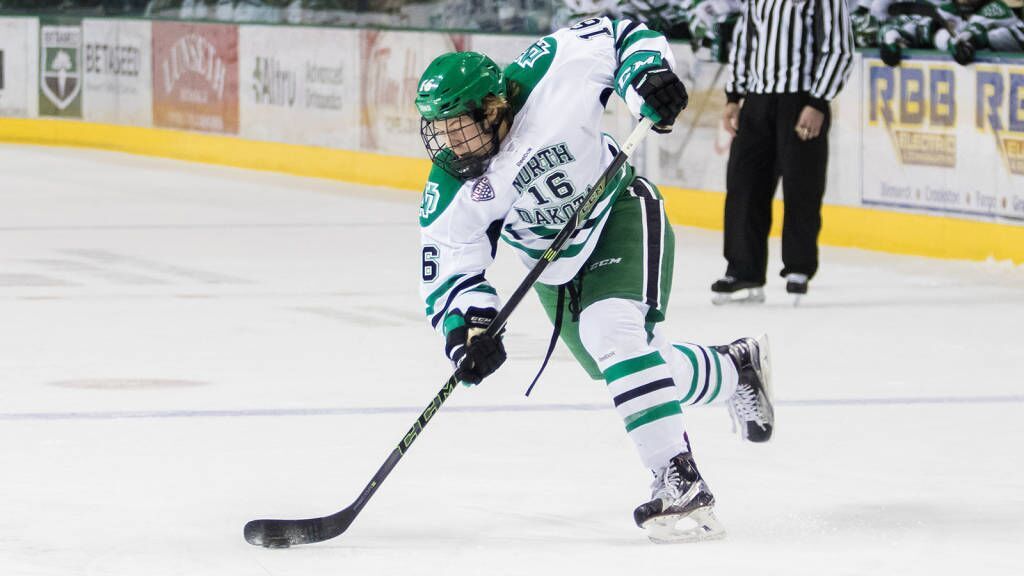 Grand Forks, ND – Coming into Saturday’s National Collegiate Hockey Conference game between the University of North Dakota and the Colorado College Tigers; UND had a 5-4 record in game two of a playoff series.  That record would improve when the game was over. More on that later.

If you’re wondering why UND has a .500 record in game two of the series? You should know, that it’s hard to end a team’s season.

After Friday’s win, UND head coach Brad Berry explained why it’s so hard to close out a playoff series in two games, “Number one, if you have the first game and the other team doesn’t, and that means that they are down in the series.

“It’s the best of three and that means that they have to win in order to prolong their season. The toughest thing to do is to close a team out. Again, were at that time of year where there’s urgency on both sides.”

Over the course of the past three seasons, history has proven that it’s also hard to win a playoff series in the NCHC. Teams facing elimination usually play desperate and want continue their season. It’s win or you go home. If you don’t win, your season over.

“It’s one of the hard things to do in hockey is end a team’s season,” defenseman Troy Stecher said.

During the season, there’s been a recurring theme. The CBS Line has led the way on the ice for the Fighting Hawks. And tonight was no different. UND’s top line had another banner night on the scoresheet, this time adding  seven points in the first period (2g-5a—7pts). After one period of play, the Hawks appeared to glide the rest of the way. They played smart hockey and added a single goal in the second period. After that, it appeared that UND called off the dogs.

“It’s huge obviously to get a quick lead, especially this time of year in the playoffs,” Stecher said. “To move forward in the playoffs you don’t want to get behind with the single game knockouts.”

Coming into the series, the Tigers were a banged up group. It appears that the Tigers starting goalie Jacob Nehama wasn’t 100 percent when he landed in Grand Forks. If I had to guess, I would doubt he was even at 75 percent.

“We kind of heard through the grapevine that he was a little bit banged up,” Stecher said. “We tried to attack him by getting pucks and bodies to the net. You do that and good things happen. I will give him credit he played through an injury and gave that team a chance to win every night.”

UND Tough to Beat at Home

UND ended the season with a 15-2-1 record at home this season. Only one of those losses were to a conference foe.

“It’s just being excited to play in this rink,” senior forward Bryn Chyzyk said. “It’s a special opportunity to go out there every night (and play). I think we will look back and will probably still regret those two losses. We’re always pumped up to play in front of our fans.”

“I think it starts with the fans,” leading scorer Brock Boeser said. “They’re tremendous – they really support us. They’re loud and it really kind of backs us up in a way. It kind of gives us some momentum in games. I think we just get a little more pumped up at home.”

“It’s a proud place to play in the Ralph,” coach Berry said. “You have loyal passionate fans that are very loud and supportive. There is a high bar and (high) expectations. Not only here, but on the road. When you’re playing here with people that are loyally devoted to the program…the guys played really hard.’“

With the win, UND advances to the Frozen Faceoff (for the third year in a row) where UND hasn’t had a lot of success. After two seasons, UND has a 1-3 record and has yet to play in the championship game. That’s one of the goals of this team. They have a few other goals that they want to accomplish.

“We talked about it in August, the boxes that we have to check off,” coach Berry said. “We just checked another one off tonight. That was getting to the Frozen Faceoff – which is so tough. We do have that one done, but we have to check off a couple of more going forward.”

It appears that UND’s first opponent will be the UMD Bulldogs. So far this season, the Fighting Hawks have a 4-0 record against the Bulldogs.

A Few Other Things

UND hasn’t lost a game this season when they’ve entered the third period with a lead. With the win, UND improves to 23-0-2 when they lead after two periods.

Over the past three seasons, UND has a 15-1-1 record against the Tigers.

With the win, UND goalie Cam Johnson improved to (20-3-1, 1.58 GAA and .938 save percentage). Johnson is leading the nation in goals-against average and is second in save percentage.