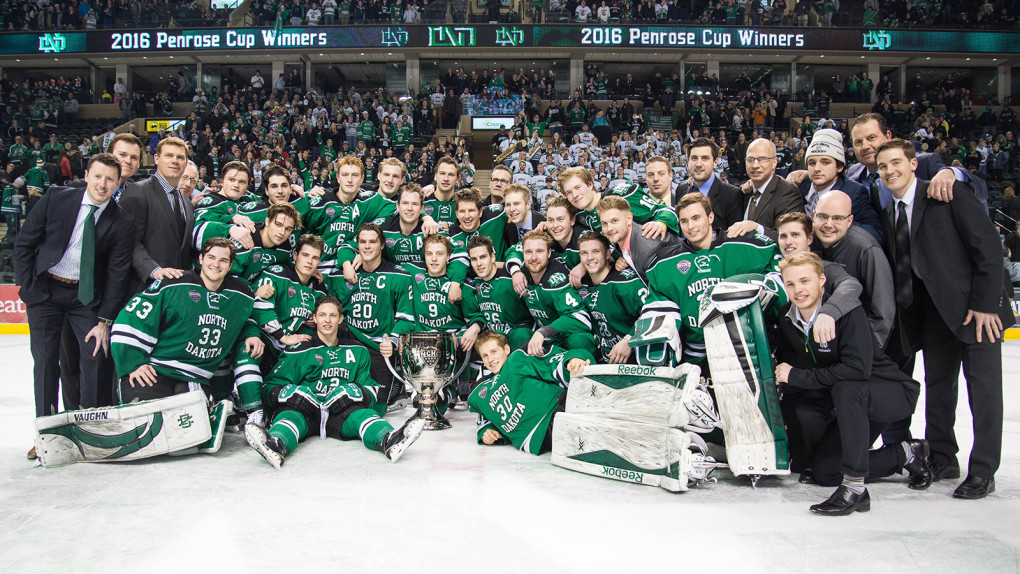 Let’s just say, the Fighting Hawks weren’t in a sharing mood. When the night was over, UND had scored eight goals and had clinched back-to-back Penrose Cups.

UND sophomore forward Nick Schmaltz entered Friday’s game a bit snake bitten.  In the last five games, Schmaltz had scored a single point. Schmaltz and his linemates would change their fortunes in a hurry.

UND would break the game open with five goals in the first thirty minutes and enter the second intermission with a 5-1 lead.

The Fighting Hawks weren’t done they would score two more goals in the third period to make it an 8-1 game. That was the first time all season UND has scored eight goals in a game.

It sounds cliché but the CBS Line was dialed in tonight. That line accounted for three of UND’s eight goals and scored (3g-6a—9pts) and were a (+12).  During the first period, Boeser and Schmaltz again added two more goals to the highlight reel collection.

You have to see this Nick Schmaltz goal to believe it. #CBSline https://t.co/yeUD5GFwaj

“Great plays made by great players and we’ve seen that all season by those guys and it was no different tonight,” Head coach Brad Berry said.

The story of the game was the play of the fourth line. Coach Berry put Shane Gersich, Coltyn Sanderson, and Chris Wilkie on the fourth line and they showed a lot of chemistry together. That line had a banner night on the score sheet (4g-3a—7pts).

“We wanted to play hard and simple,” Sanderson said. “Obviously, there’s a lot of skill on my wings with those two guys. Young kids.  Gersich is real fast and Wilkie showed that he can shot the puck and score. We got some opportunities and I am glad that we capitalized.”

Coach Berry was very pleased with his fourth line’s play.

Yeah, I like those guys,” Berry said. “They got a bit of speed on that line. I thought Coltyn Sanderson… he’s added to our group over the last little while. He continued to do that tonight. We got the old guy with a couple of young guys out there and they seemed to be good tonight.”

Winning the Penrose Cup is just one piece of the puzzle. The UND hockey team has their sights set on bigger prizes.

“They’re excited, we were very honored,” Berry said.  “This is a tough league and to win that trophy, it so tough to win that trophy, once, let alone back-to-back.  They’re very humbled and honored. I think there was a little bit of quietness and the fact this is one goal. We want to get to something a little bit bigger and get to that prize at the end of the year.”

Like their coach, the UND players were excited about winning the Penrose Cup, but know they have bigger goals.

“Definitely got chills there, Brock Boeser said. “It was one our goals at the beginning of the year. We just want to keep that going. We definitely have more goals that we want to achieve.”

“There’s obviously other stuff out there for us for sure,” Sanderson said. “It’s obviously a huge accomplish especially with the league that we play in. It’s tough every night to get wins. Anybody can beat anybody.

“Obviously, that makes it much more difficult to win a championship. At the same time, we can be happy about that, but this program hasn’t won a national championship for a long time. I think that been on our minds. I know for the last four of my career and now with the opportunity and the skill in the room. I think that’s the only thing that we will be satisfied with.”