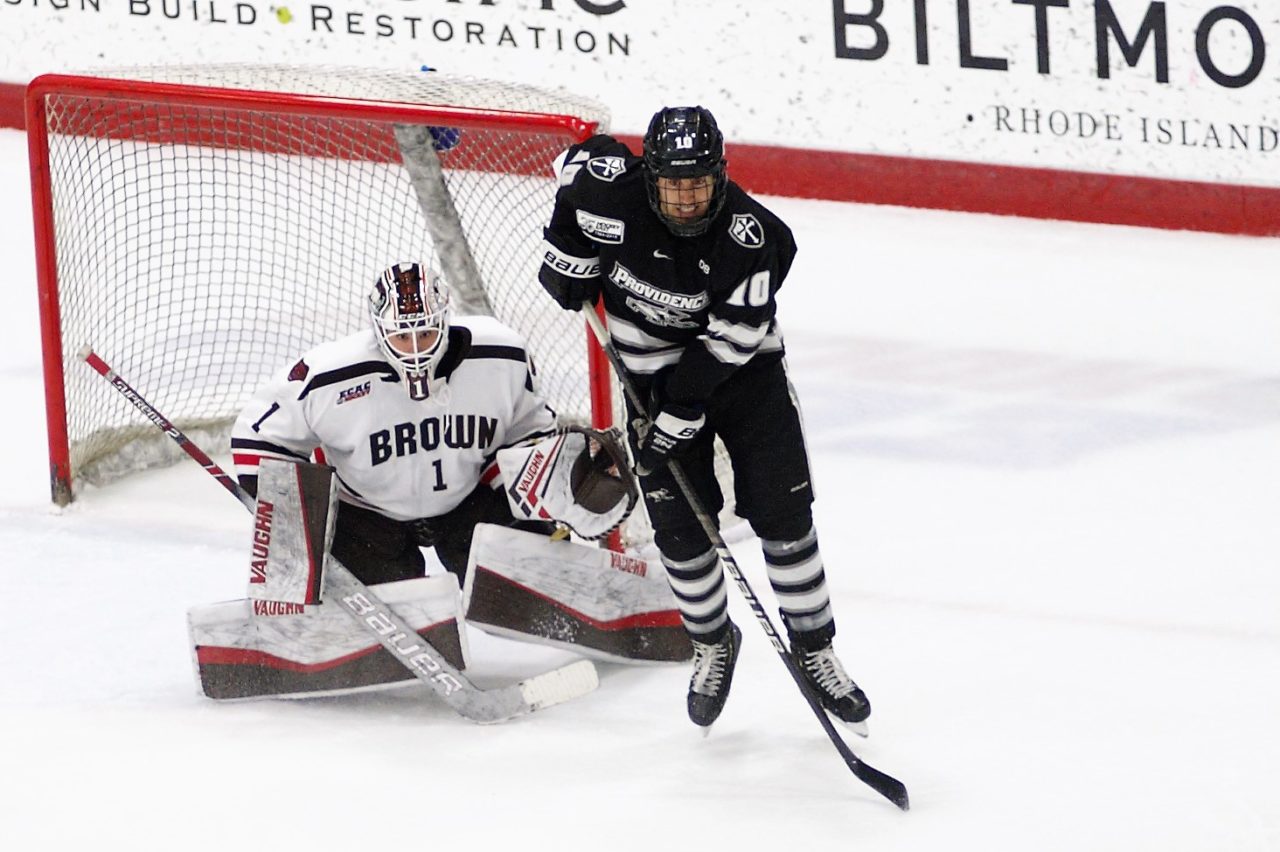 Providence, RI — Providence improved their conference and national playoff standing with a dominating win over UMass Lowell on Friday night, correcting their recent scoring woes in the process. On Saturday night, Nate Leaman’s group returned to Friartown looking for a series sweep and improved positioning for the postseason. In front of a spirited Schneider Arena crowd, Providence and Lowell combined for a physical, gritty game that ended in the Friars’ favor.

The opening frame was controlled by PC, who outshot Lowell 11-7 and out-attempted their guests 26-13. Lowell still got their chances and the goalie, Hayden Hawkey, and Christoffer Hernberg, ended up headlining the opening scoreless period.

Lowell had the higher shot counter on the second period but yielded the game’s only tally. Providence flooded the Riverhawk offensive end and peppered Hernberg in the waning minutes. The senior could not control one rebound that squirted out to Tyce Thompson. The freshman from Milford, CT did not miss. He scored his second goal of the weekend and sixth of the season for what amounted to the only offensive tally of the night.

Providence dictated the third period pace behind a parade of Lowell penalties. Bazin’s squad committed four of the six minors in a war of attrition. Despite getting outshot 11-5 in the final frame, Lowell had a chance in the final seconds, but could not pot one on Hawkey before the buzzer sounded. Providence gained a critical series sweep over a Hockey East standard bearer.

“I thought it was a winnable game”, mused Norm Bazin. “Chris Hernber was excellent. I thought that was a good effort tonight. Obviously, we couldn’t generate enough chances. And you’ve gotta generate chances to score on good goaltenders in Hockey East. We had some chances, a few looks we could’ve converted on. We didn’t. But, at the end of the day, if you’re gonna kill four penalties, you don’t win too many hockey games.”

Lowell drops to 17-10-2 and 11-6-2 in Hockey East. They drop to 14th in the Pairwise, on the NCAA Tournament bubble, and are tied with the Friars in conference points.

The Riverhawks play a home-and-home series with local rival Merrimack next weekend. Puck drops at 7:15 pm on Friday night at Tsongas Center and at 7 pm at Lawler Rink on Saturday night against the Warriors.

“I thought tonight’s game was a lot different than last night’s game” observed Nate Leaman. “More of a defensive battle. There wasn’t a lot of free space, which is pretty typical of Saturday nights in the second half in our league. I thought our guys grinded one out.”

Providence moves to 18-9-5 and 11-7-2 in Hockey East. The Friars move up from 17th in the Pairwise at weekend’s start to 12th at weekend’s conclusion. Both teams have 24 points, six back of first placed UMass Amherst.

The Friars face UMass on Saturday night back home at Schneider Arena. Puck drops against the Minutemen at 5 pm.