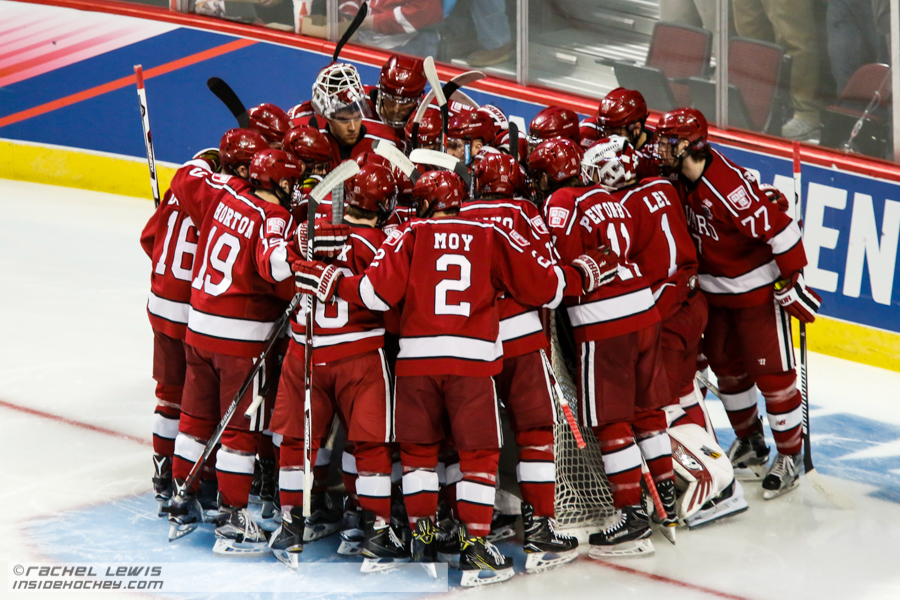 Harvard huddles before the start of the game.

Allston, MA- The Harvard Crimson entered an important transition year with a road trip to Dartmouth last week. Star skater Ryan Donato and Assistant Coach Paul Pearl departed for the Bruins and BU Terriers respectively, among others. Still, the Crimson showed offensive punch and a notable power play against the Big Green. They scored six goals with five coming via seven power play attempts. Unfortunately, while the offense and special teams have adjusted, one other departure has not been filled.

Merrick Madsen held the goaltending job since 2016, even wearing a “C’ last year. This year, the Harvard goaltender spot is open for Michael Lackey, Cameron Gornet, and Derek Schaedig to claim and so far, none of them have secured the job. Lackey got the start in Hanover and surrendered seven goals in an overtime loss to the Big Green.

Chase Priskie fired a puck off his leg from a bad angle 2:10 into the game and Odeen Tufto fired a wicked shot off an Alex Whelan pass behind the net. It wasn’t much better when Brandon Fortunato and William Fallstrom added two goals in the first 2:27 of the second period to apparently sink Harvard at 4-0.

The Crimson offense battled back, winning the shot battle 37-30 for the game and potted two goals in the second period. Jack Rathbone got the first following a slick Nathan Krusko pass across the slot. Lewis Zerter-Gossage entered the highlight reel on the second goal to give Harvard life. Sadly for Crimson fans, they got no closer.

Ethan de Jong ballooned the Quinnipiac back to three before the end of the second and Bobcat goalie Keith Petruzzelli mostly closed the door on the Crimson offense. Michael Floodstrand got one goal back for Harvard, but the Detroit drafted netminder recorded 34 saves in a 5-3 victory. Gornet recorded 25 saves on 30 shots faced.

Harvard returned to home ice the next night against Princeton and showed similar offensive talent and goaltending concerns. The two offensively potent squads were tied 2-2 after the first period. Max Veronneau opened the scoring on Michael Lackey 3:41 into the game. Jack Rathbone and Henry Bowlby each scored to give Harvard a lead, but Ryan Kuffner tied the game again. Princeton outscored Harvard 2-1 in the second period after being outshot 11-8.

Harvard’s defensive prowess started clicking in the third period, allowing the ECAC’s top scoring unit only four shots in the final frame. Casey Dornbach tied the game early in the third and the Crimson skated to their first point of the season with a 4-4 tie.

Harvard’s record stands at 0-2-1, all in ECAC play. Through three games, the Crimson have allowed 16 goals for a 5.33 Goals Against Average, last place in the nation. They’ve scored 13 goals in those games, averaging 4.33 goals a game, tied for second in the nation. They hit the road next week with a trip to Yale and then Brown. Puck drop is scheduled for 7 pm at Ingalls Rink on Friday night and 7 pm at Meehan Auditorium on Saturday night.