Boston, MA. — Teams don’t want to be playing at 4:30 pm on Beanpot Monday. The Consolation Game is a sad affair due to the sparse crowd, the smaller bands (if they even show) and the lack of hardware after the game. Tonight’s two participants are no exception, Boston U. and Harvard would obviously rather be skating after Beanpot glory. Each team is alive in conference play. Harvard is in fourth in ECAC play, while BU is in seventh. Fortunately for the Crimson they still have the Pairwise to play for.

The opening period was a dull period. The Terriers came out flat and lifeless, and the early play of goalie Vinnie Purpura, making just his second start, kept Harvard scoreless. The Crimson peppered him with 12 shots in the period. At 15:51 Harvard’s Jack Drury was called for Roughing and BU’s Logan Cockerill for Holding. The shot edge was 12-5 Crimson. 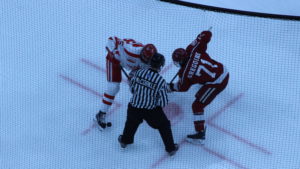 The second period opened with BU’s Dante Fabbro in the box for Cross-Checking. That penalty carried over from the last two seconds of the first period. Nothing came from the top Power Play unit in NCAA play. Harvard was routinely jumping the routes of BU passes and creating opportunities.

Finally, at 9:28 the Crimson solved Purpura when Frederic Gregoire wristed a shot from the right hash mark past the Terrier goalie for the 1-0 lead. BU still showed no sign of life and a defensive lapse in front of Purpura led to Crimson defenseman Reilly Walsh sliding a pass across the front of the BU goal, while on his knees, to Jack Badini. Badini just had to tap the puck into the Terrier net for a 2-0 edge. The period ended with Harvard outshooting BU 20-9 for the frame.

In the final period, BU rallied a bit and started to turn in a positive effort. A beautiful tic tac toe passing sequence put the Terriers on the board at 6:11. David Farrance slap passed from the left point to Joel Farrabee to the right of Harvard’s goal. Farrabee fired a pass across the crease to a wide-open Patrick Curry who buried the puck past Michael Lackey cutting the lead to one.

Once again, Gregoire struck with a wrist shot from the right side wall at 12:28 to give the Crimson the two-goal cushion. Hobey Baker candidate Adam Fox sealed the deal on this one with an empty net goal at 16:51. BU junior Gabriel Chabot wasn’t giving up yet. Chabot walked out from the corner, fired a shot that beat Lackey but clanged of the post. Chabot had crashed the net and the puck bounced right to him and he beat Lackey again, this time getting twine. At 19:18 Crimson freshman R.J. Murphy notched his first career goal with an empty netter. 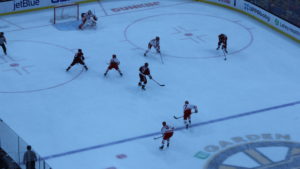 Frederic Gregoire tees up for his second goal of the game.

Afterward, BU coach Albie O’Connell, in the midst of a five-game losing streak, somberly said, “Harvard played a really good game, can’t say that about our club. We were more prepared during practice yesterday than we were tonight. Lack of focus, lack of care, petty poor first two periods. Third period we came to life.”

In the post-game presser, Ted Donato was in a more jovial mood.

“We’re happy to get the win,” Donato said. “I thought we played pretty well, pretty solid. It can be a tough game to play in, however, as far the Pairwise and the implications, potential opportunities at the end of the season. It’s just as important as any other game. I thought our guys came out and played a good solid game.”

Frederic Gregoire has been on quite a roll since the return of the team from winter break. Including tonight’s game, he has 10 points in 12 games. When asked what’s changed since the break?

“I think over break I just tried to stay in shape and since coming back from the break just keep things simple,” Gregoire said. “Put pucks to the net and just work hard. Just been lucky to get the bounces.”

His coach added “Freddie’s been excellent, it was nice to see,” Donato said. “He had a couple of good chances in the first two periods where we were really harping on him to shoot. It was nice to see him get a couple of goals and be rewarded because he does a lot of unselfish things to help us win, whether its killing penalties or playing down low defensively but he was certainly a factor for us tonight.”

A summer that was expected to bring seismic changes for the Penguins ended instead in the unlikely return of the big three. With fresh long-term deals, Evgeni Malkin and Kris Letang are back alongside captain Sidney Crosby for an NHL-unprecedented 17th season.