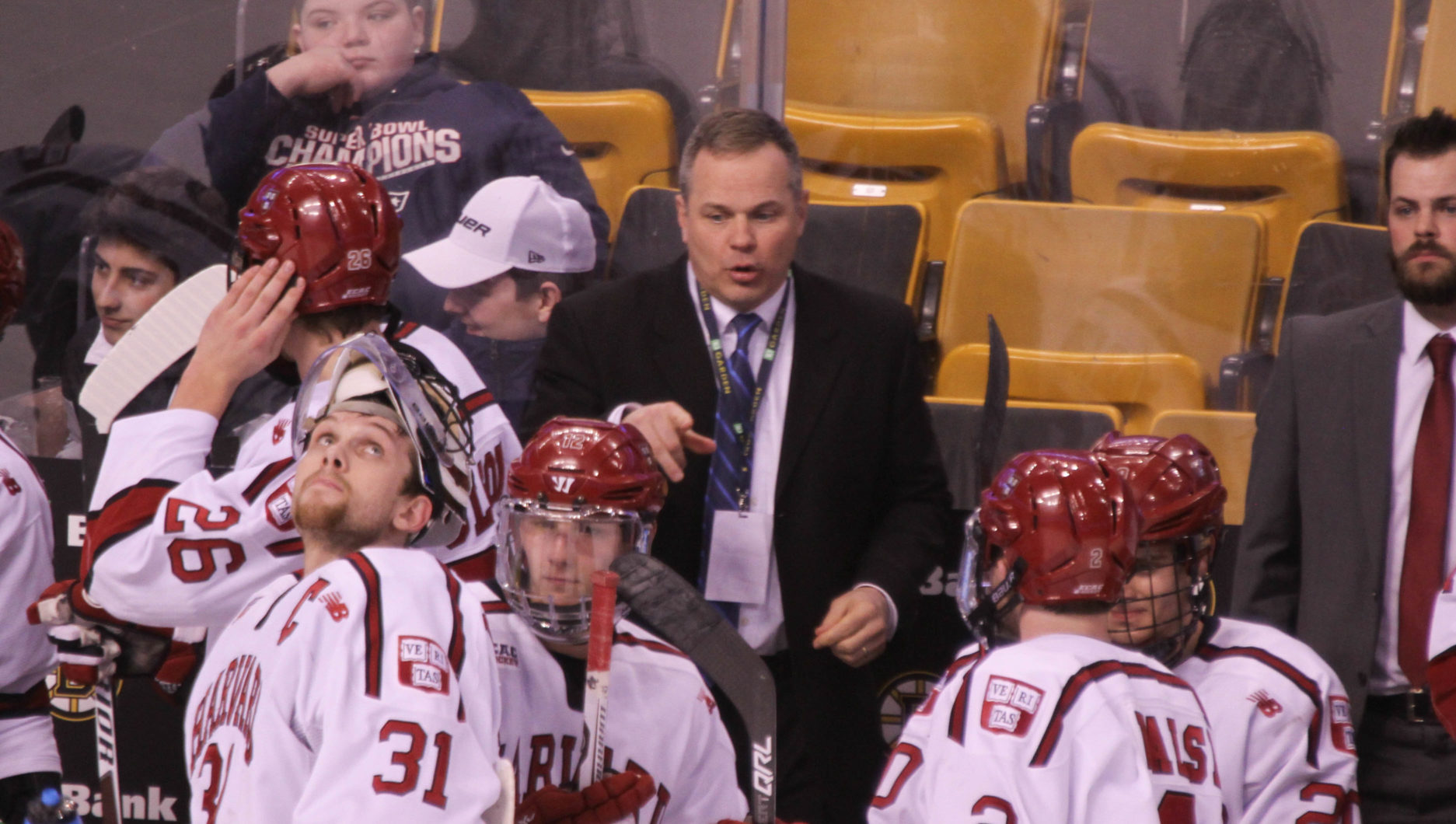 Boston, MA- Neither Harvard nor Boston College have dazzled this year. The Crimson and Eagles have each underwhelmed with Harvard looking like a one-man band at points and BC struggling to win outside Hockey East. The teams lost their opening round Beanpot games and met to determine third and fourth place in Boston’s annual college hockey tournament. The game opened slowly but ended with a thrilling bang.

The opening frame was slow as pond water, boasting the feel of a consolation game. Harvard won the shot battle 10-5 and sophomore goalie Cameron Gornet stopped every shot he faced in his first collegiate start. Kevin Lohan returned to the BC defense after breaking his jaw earlier this year but had some rust. He committed a cross-checking penalty that Harvard converted on. Lewis Zerter-Gossage potted a loose puck that got by sophomore Ryan Edquist and gave the Crimson a 1-0 lead before the intermission.

The second period saw more shots and BC got in a rhythm. Harvard did have much of the first half of the frame on their sticks, but Ryan Edquist, starting in place of Joseph Woll, stopped all 11 shots he faced in the period. And it looked as though Harvard would extend their lead late in the frame when the Eagles were called for too many men on the ice. Christopher Brown had other ideas though. The junior captain drove up the left side and scored a shorthanded goal to draw even before the second intermission

Action opened up considerably in the third period and the game went from a consolation feel to a serious tournament atmosphere. Harvard opened the scoring early in the frame when John Marino potted a loose puck to restore the lead. 2:13 later, Henry Bowlby scored on a power play caused by Casey Fitzgerald’s cross-checking penalty.

The Eagles answered shortly after when Logan Hutsko scored on a rush from the right side. Harvard looked to have the game won when Jack Donato scored his first collegiate goal in place of his Olympian brother. Logan Hutsko though otherwise. The freshman from Tampa scored two goals. One on a power play and one with the goalie pulled. Hutsko’ hat trick forced the game into overtime.

BC continued their surge into OT when Casey Fitzgerald rung the post and almost won the game. The Eagles totaled five shots in the extra session. But Cameron Gornet, starting his first collegiate goal, stopped all five shots he faced and recorded 30 saves against BC.

With time winding down, Harvard landed the knockout blow. Jake Horton found Seb Lloyd at the right side of the slot and the senior fired it by Edquist with 2:17 left in the five-minute extra session.

The loss dropped BC to 14-13-3 and keeps BC from earning a non-conference win this season. It’s only the second time BC has finished fourth in the Beanpot in the 66 years of the tournament. Head Coach Jerry York was disappointed but focused after the game.

“We made things interesting late. Logan is a great and emerging player in Hockey East. But we didn’t pull it out and we’ve gotta move on.” The Eagles travel to Amherst to face the UMass Minutemen for their next game. Puck drops at 7 pm at the Mullins Center on Thursday night.

Crimson Head Coach Ted Donato was gracious after the game.

“It was disappointing to lose last week and not be in the final. That said, happy with the effort tonight. Pleased with how guys filled in and performed.”

Harvard runs their record to 11-10-4 with the win. They return to Cambridge this weekend for a two-game homestand. St. Lawrence visits on Friday night and Clarkson plays on Saturday night. Puck drops at 7 pm both nights at the Bright-Landry Hockey Center.